Trump's Syria Strike Sent Russia a Message. What Does Moscow Do Next? 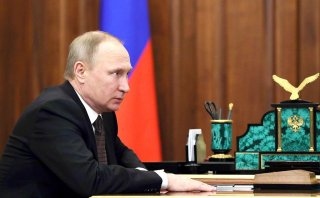 The recent U.S. missile strike did not significantly change the state of affairs on Syria’s battlefields. Nevertheless, it has significantly altered the global political context of the Syrian Civil War and forced all players to modify their strategic calculations. Russia is no exception. America’s actions might help Moscow a great deal in calibrating its goals and the methods to achieve them. Donald Trump made a serious move; now it is Vladimir Putin’s turn.

According to several assessments, and as confirmed by the United States, the strike on Syria was planned and executed to be limited, measured and very specific. Despite that, it could not help but create broader strategic implications in Syria and globally. There is no doubt that, with this strike, the Trump administration sent a message for international and domestic audiences. Russia was among the many intended recipients. What conclusions should experts and decisionmakers in Moscow now be making?

First, considering how quickly the decision on the bombardment seems to have been made, it is now confirmed that President Trump makes foreign-policy decisions personally, with limited involvement from experts and the agencies in charge, to say nothing of Congress.

Second, Trump’s decisions could easily become far more dangerous to Russia than those made by President Obama; the strike on Syria is a clear example. During last year’s electoral campaign, Moscow saw Donald Trump as a fresh face clashing with the American foreign-policy establishment. This led to Russian expectations of a fresh start in U.S.-Russia relations in the case of a Trump presidency. Later, when Trump won and began his engagement with the establishment, his perception among decisionmakers in Russia changed; Trump’s reputation as a successful negotiator became more important.

Now, the situation has changed again, and the Kremlin needs to reconsider whether Trump will continue the United States’ post–Cold War foreign policy, which Russia sees as expansionist and, on many occasions, harmful to Russian national interests. When and where will the American president decide to strike next? This question, and many others, needs to be answered. For Russia, the strike on Syria serves as a warning that under the new administration, the geopolitical showdown with the United States may intensify.

The third strategic implication of the American strike for Russia can be an improvement in Moscow’s communication with Bashar al-Assad. The Syrian president has just received a clear reminder of his vulnerability. One can argue whether the Syrian government is behind the chemical attack in Idlib. Even if Syrian officials are behind the tragedy, there is simply no reason to suppose that Russia supported this action. (Secretary of State Rex Tillerson clearly stated that the American officials “do not have any information that suggests that Russia was a part of the military attack undertaken using the chemical weapons.”) Together with the United States, Russia initiated the removal of chemical weapons from Syria, and these kinds of incidents are a serious blow to Russia’s international stance. Now, Moscow has the strong example of the U.S. strike to remind Assad that unless he follows the Kremlin’s lead, he can lose everything. In the current situation, the Syrian president had better go along with Russia’s plans, the biggest guarantor of his survival. Among other things, this makes Assad more amenable to plans for a political settlement in Syria, supported by Russia.

Besides the immediate strategic implications of the U.S. strike on Syria, there are several broader consequences for Russia. The most noticeable is the continuing influence of the unstable Middle East on global oil prices. Several dozen Tomahawk missiles were enough to provoke a rise in the price of oil. One can only imagine what a few hundred more missiles can do to oil markets over time.

In the long view, this means not only that oil markets will continue to be linked with global political and security events, but also that the Middle East remains the major region where this connection takes place. For Russia, the latter proves that the expansion of its presence in the region is the right policy course. As a major energy exporter, Moscow is better off staying involved in the region that defines global energy markets.

The next question that the United States’ military action against Syria raised is: what will be China’s reaction to a newly assertive American foreign policy? Considering that the timing of the strike was a matter of choice for Washington, it is difficult to see mere coincidence in the fact the Chinese leader Xi Jinping was informed about President Trump’s decision during dinner after their first day of talks. The long-standing Chinese policy against unilateral military action without UN approval is no secret. In times of rising international tensions with North Korea and in the South China Sea, Beijing received an additional reminder of American global military capabilities.

The near future will show how this will translate in Chinese political actions. In this regard, one should remember how India became increasingly interested in Russia’s offers of political and security cooperation in 1999–2000, after the American military campaign against Yugoslavia. Will the last week’s strike against Syria lead to a more assertive, interventionist foreign policy for the Trump administration? And, if so, will that result in deepening of Chinese-Russian political and security cooperation?

Analyzing the Russian reaction to the American missile strike, one can notice that this reaction was measured. Of course, no one could anticipate anything from Moscow other than condemnation of America’s actions. However, it seemed that officials, including President Putin, said only what was expected from them in this situation; no heated rhetoric followed. And, indeed, there was no need. Loud statements need to be followed by decisive actions; otherwise, a country’s international credibility and positions suffer. The question stands: what options does Russia have in the situation, now redefined by the American strike on Syria?

There is no doubt that stabilization in Syria is in Russia’s interests, but that can hardly come through a military victory for Assad. First of all, such a win remains only a long-term prospect. Besides, the prolonged fighting, even if ultimately beneficial to the Syrian authorities, will further damage the country in many ways, and Moscow is not interested in having a basket case for an ally.

This is why Russia is interested in a political solution. It is worth emphasizing, once again, that Assad can become more amenable to this solution in the wake of the United States’ military action. Still, even under Russian pressure, the Syrian president and the forces he represents cannot reach an agreement by themselves. The opposite side of the negotiating table also needs to get organized, and be representative, ready and capable of implementing a possible agreement. Washington can help in the search for such partners for a political settlement—provided, of course, that there is a real interest in Washington to drastically change course in Syria and stop the bloodshed.