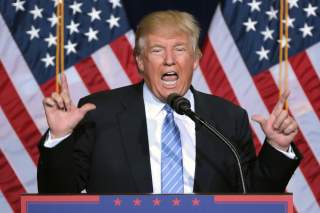 Beijing reacted with both anger and condescension Monday to President-elect Donald Trump’s assertion the previous day that he is not bound by Washington’s decades-old “One-China policy.” The torrent of words from state media and the foreign ministry came in conjunction with a threat to use force against Taiwan.

On Sunday, Trump demonstrated he was not backing down in the face of the furor over his December 2 phone call with Taiwan President Tsai Ing-wen. “I fully understand the One-China policy,” he said to Chris Wallace in an interview aired on Fox News Sunday. “But I don’t know why we have to be bound by a One-China policy unless we make a deal with China having to do with other things, including trade.”

The Ministry of Foreign Affairs wasted little time in replying. “I want to stress that the Taiwan question has a bearing on China’s sovereignty and territorial integrity and touches our core interests,” said spokesman Geng Shuang. “Adhering to the One China principle is the political bedrock for the development of U.S.-China relations. If this foundation is compromised or disrupted, the sound and steady growth of the bilateral relationship, as well as bilateral cooperation in major fields, would be out of the question.” China, Geng said, was “seriously concerned” by Trump’s comments.

China’s state media proceeded along a dual track. Global Times, the tabloid controlled by People’s Daily, forecast a “real storm.” Then there was this explicit warning from the nationalist paper: “In response to Trump’s provocations, Beijing could offer support, even military assistance to US foes.”

And on Monday evening, Global Times dropped the big threat. “If Trump wants to play tough, China will not fail,” the paper stated in an unsigned op-ed. “Beijing should start from severely punishing Taiwan independence forces, exploring the possibility of disciplining those forces through non-peaceful means and make the use of military force an actual option to realize reunification.”

The harsh words followed Saturday’s aerial exercise. Four Chinese planes flew clockwise around Taiwan, an especially provocative maneuver. On November 25, China’s air force sent aircraft counterclockwise around the island, a possible warning to Trump and Tsai not to go through with their then upcoming phone call.

For the most part, however, state media on Monday ladled out condescension, calling President-elect Trump an amateur when it comes to foreign affairs. Global Times extensively quoted a China Foreign Affairs University professor, Li Haidong, who portrayed Trump as a “novice,” “immature” and “manipulated by some conservative forces.”

Xinhua and the Global Times were following the line established by the official China Daily, which after the Tsai telephone conversation said that Trump was a “diplomatic rookie.”

Yet China’s reaction could have been worse. Beijing’s tone, even with the insults and threats, suggests Chinese officials are hoping Trump will follow the playbook of new American leaders who have criticized China to get into office and then moderated their views to govern. By giving the president-elect the excuse of inexperience—you can almost hear Beijing leaders saying “he will learn”—they see themselves as generous by providing an out.

But America’s next president is unique and unlikely to take the path of predecessors. As Zhu Zhiqun of Bucknell University told the South China Morning Post, “If there is any pattern from previous administrations, that pattern will not apply to Trump since he does not play by the rules.”

Good for Trump. The critique from the American foreign policy establishment of his Taiwan moves is that he has unilaterally changed the basis of America’s relations with Beijing, executing a sharp break from the policies in place since 1979.

That, by the way, is also China’s complaint. “A country must be responsible for its commitments to other countries, and despite the change of government, the new U.S. administration should act in accordance with the current framework of China-U.S. ties, rather than ignoring it in an impulsive and self-deceiving way,” said the Xinhua commentary, entitled “Principles, not impulsiveness, needed for China-U.S. ties.”

Trump gets high marks for ignoring these Chinese and American views trumpeting stability. Stability, unfortunately, has not been working for the United States as American policies, since the end of the Cold War, have put China’s well-being above its own interests and those of the international community.

Many say Trump is threatening the basis of U.S.-China relations, and that is true, but Beijing has by various acts also threatened that basis, in the Taiwan area as well as in others, such as trade, cyber espionage, North Korea and the South China Sea. Who says only the Chinese are allowed to change policy?

Trump may be a rookie, but his instincts are generally sound.

Yet there is one concern: his intimation, to Fox’s Wallace, that Taiwan is merely a bargaining chip. Put aside the notion that the United States is already involved in a global struggle of ideas, so Washington should support democracies because they are democracies. Also put aside the fact that Taiwan is not America’s to bargain away, and in any event Beijing, due to internal dissension, is not in a position to arrive at a grand bargain with the United States.

The problem with Trump’s bargaining-chip comment is that it has the potential for needlessly aggravating relations with China. If Beijing felt Trump were a firm believer in Taiwan, it would still huff and puff, but would eventually realize it was no match in the long run for a determined America, especially with China troubled by both a fragile economy and an increasingly turbulent leadership transition.

But if Chinese leaders think Trump is not serious about supporting Taiwan because it’s only a chip, they would be tempted to push harder, knowing they could get more out of Washington by being even more belligerent. That creates what everyone fears: the spiral downward.

If the Chinese think they can’t budge Trump, however, we will all be much better off. So the master of The Art of the Deal should stand firm and not deal.