Trump's Tariffs are a Trade Tool 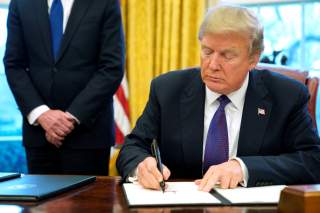 There are currently two major tariffs proposed by the Trump administration. One is a specific tariff on steel and aluminum, the result of an investigation that began last summer into what amounts to national security surrounding those industries. The second is a so-called Section 301 investigation of China for the theft of intellectual property.

In searching for an analogue to the steel and aluminum tariffs, there are a few recent examples of similar actions taken by presidents. For example, in 2002, then President Bush implemented a 30 percent tariff on steel. There are a number of similarities between the methodology and logic used in the Bush-era tariffs and the auspicious timing.

For the potential China tariffs, it is a bit more difficult to find a modern similar circumstance. Instead of using history as an example then, it might be better thought of as a regime shift toward protectionism as a negotiating weapon. This is a better framework for understanding the potential and the context.

The Steel and Aluminum Tariffs

The steel and aluminum tariffs are not important in the grand scheme of things. But the signal—that the United States will impose tariffs at will—has a chilling effect on the positive economic sentiment that has prevailed in 2017 and 2018. Critically, the tariffs will hurt critical allies the most.

China is not the target of those tariffs. China is a minuscule part of the steel trade with the United States. For aluminum, the figures are even lower. Canada, on the other hand, will feel the tariffs acutely. Using the Census Bureau's “for consumption” figures, China is 2 percent of steel imports and Canada is 20 percent. That is a striking difference. Mexico is also a significant trading partner.

Given there was a round of NAFTA negotiations currently underway when the potential tariffs became news, the timing of the rhetoric was always a bit suspect. And President Trump himself has stated Canada and Mexico would be excluded with a positive NAFTA outcome. In many ways, the steel and aluminum tariffs look more like a bargaining stick than true tariffs.

One argument for using steel and aluminum tariffs as a trade “stick” is that some trading partners—like China—would come to the bargaining table over steel and aluminum. Hao Tan, writing last year in Foreign Affairs, presented a particularly well thought through proposition for mitigating some of the global trade angst. His article “The Art of the Steel Deal” was prescient in some ways, and potentially a roadmap forward in others. The basic premise was that steel and other energy intensive industries have already begun to leave China, and it would be something the Chinese government might be willing to give up.

China might not be in the cross hairs of the tariffs, but it is the sole target of the potentially much farther-reaching Section 301 investigation. Between steel and aluminum tariffs and the 301 investigation, the 301 on China is far more important. President Trump recently tweeted that the United States had asked China for a plan to reduce its trade surplus with the United States by $1 billion. Later reports increased this figure to $100 billion or 28 percent of the Chinese surplus, a substantive difference.

For background, Section 301 is a trade rule that allows a president to take significant unilateral action against countries deemed to “unjustifiable or unreasonable tariff” or other trade restrictions. The “Special Section 301” is a specific list of intellectual property offenders compiled annually by the United States Trade Representative. The list of offenders is long and includes both significant and insignificant offenders.

The critical aspect of a Section 301 investigation is that the available remedies are wide-ranging. After all, the language reads, “the President... may impose duties or other import restrictions on the products of such foreign country or instrumentality, and may impose fees or restrictions on the services of such foreign country or instrumentality, for such time as he deems appropriate.” There is no need for the president to consult Congress, but there is the requirement that the president allow for offenders to seek a remedy.

As stated above, there are issues that the United States and China can find common ground on in trade including steel. And there are numerous other areas as well. For instance, last summer following a meeting between President Xi and President Trump, China offered to be more open to U.S. beef exports.

How will the U.S.-China trade relationship evolve? It is difficult to tell. After all, the two sides should at least attempt to come to terms before the U.S. places tariffs. That would be the normal course of events. The $100 billion figure is a nonstarter for China, but it was probably only an opening bid. The Chinese will more than likely counter with a more reasonable and politically satisfying for both sides. Steel, autos, and planes seem the most likely to be on the table for China, and those are politically appealing to the Trump administration as well.

In the end, the Trump administration appears (at least initially) to be using tariffs and the threat of tariffs to gain concessions from trading partners deemed to have abused the free-trade system. If this strategy becomes successful, the likelihood becomes further threaten-to-negotiate cycles.

In the end, there is a protectionist lean to the administration. However, a trade war is not (necessarily) imminent, and the details of any action will not be available for some time. Markets appear to be handling the potential action in stride, and there has not been an overreaction. The primary takeaway is that paying attention to trade and rhetoric developments over the next few months will be paramount. As long as any incremental tariffs are indeed “surgical” and China comes to the negotiating table, the global economy should be able to cope.