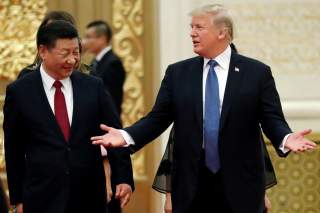 President Donald Trump on Wednesday handed a reprieve to ravenous Chinese acquirers looking for U.S. tech companies by issuing a statement that he will not put in place across-the-board rules blocking certain investments from China.

On May 29, the White House in a statement promised by June 30 to “implement specific investment restrictions” barring Chinese parties from acquiring “industrially significant technology.”

Instead of using authority granted by the International Emergency Economic Powers Act of 1977 to issue such investment restrictions, the president on Wednesday endorsed legislation, now working its way through Congress, expanding the authority of the Committee on Foreign Investment in the United States. CFIUS, as the Treasury-led interagency body is known, can block certain acquisitions of U.S. businesses by foreign parties.

“China will closely monitor the legislation process and evaluate its potential impact on Chinese companies,” Commerce Ministry spokesman Gao Feng said on Thursday in Beijing to reporters. “China does not agree with tightening foreign-investment conditions using national security as reasons.” The official reaction was, considering the circumstances, mild, an indication Chinese leaders were relieved by Trump’s decision not to act.

Yet Beijing, which has been behind many recent tech acquisitions, should not be too happy. Trump is determined to stop China from scooping up America’s “crown jewels,” the term he used in his Wednesday statement. As some observers are now saying, the United States and China are entangled in a tech war, not a trade one.

In that tech war, in reality an all-encompassing struggle, China is not in a position to prevail over a determined American leader.

The House of Representatives is certainly determined. Tuesday night the body approved the Foreign Investment Risk Review Modernization Act by a 400–2 margin. The bill, like a Senate version passed earlier this month, gives CFIUS the ability to look at—and stop—a broader range of transactions. The two bills now head to reconciliation.

Alan Tonelson, a trade expert based in Washington, DC told the National Interest on Wednesday that he would have liked to see specific regulations—Trump’s original plan—but that improving CFIUS rules is a necessary first step “to better protect from Chinese predation.”

CFIUS legislation, when it is enacted, will probably create a category of “countries of special concern.”

There is no country of greater concern to the United States than the People’s Republic of China. Xi Jinping, the assertive Chinese ruler, is determined to make his country the world’s tech leader, and he does not feel constrained by China’s World Trade Organization obligations.

Xi’s Made in China 2025 initiative, announced in 2015, is a collection of blatant trade violations. CM2025, as the initiative is known in China, seeks near self-sufficiency in ten crucial industries, including aircraft, robotics, electric cars, semiconductors, and wireless communications. The plan is comprehensive, including assistance for the purchase of foreign-tech companies.

That pits China’s best against America’s giants. “In the saga of the U.S.-China economic rivalry,” writes Lorand Laskai of the Council on Foreign Relations, “Made in China 2025 is shaping up to be the central villain, the real existential threat to U.S. technological leadership.”

Chinese officials, however, are now beginning to understand they have pushed the United States too far. Hong Kong’s South China Morning Post reports that the Chinese central government has “instructed Chinese state media agencies to avoid mentioning Made in China 2025 in their reports.”

Similarly, a “senior western diplomat” speaking to Reuters said “Chinese officials have recently begun downplaying Made in China 2025.” Beijing’s new line is that “the aspects that have raised the most ire abroad were simply proposals by Chinese academics.”

That assertion, of course, is patently false because, among other reasons, Beijing won’t drop CM2025. In fact, Chinese officials have told American negotiators the program is nonnegotiable.

Xi Jinping evidently thinks his country is sufficiently advanced to challenge the United States at this time for tech leadership. Many Chinese, however, are not so sure. The normally assertive Global Times in an editorial published Sunday noted that China has become “overconfident” about its tech capabilities.

Some Chinese agree. Liu Yadong, editor-in-chief of Science and Technology Daily, struck a nerve recently when publicly proclaiming that the country’s leadership had been, in the words of the South China Morning Post, “hoodwinked” into believing China will soon become the world’s tech leader.

A hoodwinked Xi may not think so, but U.S. restrictions will impact China. “It’s going to be a big handicap for Chinese technology development,” said Jingzhou Tao of law firm Dechert to the Wall Street Journal, on expected U.S. investment prohibitions.

Furthermore, Robert Blohm, a Toronto-based China expert who spent a decade in Beijing, raises a more fundamental point about Chinese aspirations: the shortcomings of the Chinese state-driven model. “Five-thousand years of state failures still haven’t taught them,” he told the National Interest.

China’s Made in China 2025 program creates a confrontation at a time of a multiplicity of disputes over technology. The other big tech controversy involves Trump’s tariffs, to be imposed under Section 301 of the Trade Act of 1974, for theft of intellectual property.

Chinese rules, in contravention of WTO obligations, require foreign companies to hand over technology for market access, and China outright steals, through cyber and other means, U.S. tech. The theft, from all indications, amounts to hundreds of billions of dollars a year.

The first of Trump’s 301 tariffs, scheduled to go into effect July 6, have riled the Chinese leadership. “In the West, you have the notion that if somebody hits you on the left cheek, you turn the other cheek,” Xi Jinping told the Global CEO Council, a grouping of foreign business leaders, on Thursday in Beijing. “In our culture, we punch back.”

“China is not going to yield to outside pressure and eat the bitter fruit,” a senior Chinese official told the Wall Street Journal. “That’s the negotiation principle set by President Xi.”

Xi Jinping can throw a punch and establish all the principles he wants, but he is in no position to sustain U.S. retaliation. His punch remark is widely interpreted as a threat to go after American companies in China, but Chinese officials are not especially enthusiastic about that course of action. “A big worry for China is that foreign investors are opting to leave the country,” a Chinese government source told the South China Morning Post. “The option of targeting U.S. firms in China has never been on the cards.”

That last statement is certainly untrue. In any event, this is a particularly bad time for Beijing to target U.S. companies. The U.S. economy is vibrant, and China’s is slowing fast. China absolutely depends on access to the United States. Last year, 88.8 percent of the country’s overall merchandise trade surplus related to sales to America.

It is, from all appearances, a bad time for China to target any other country at all. Various indicators for China’s economy in May—in particular, fixed-asset investment, industrial production, and retail sales—either hit historic lows or brushed close to them. Chinese equity market indexes are plunging—the Shanghai Composite is the world’s worst-performing major stock index this year—and the renminbi is tumbling against the dollar.

And if all that weren’t bad enough, China has been accumulating indebtedness faster than it has been growing. When so-called hidden debt is taken into account, the country is now incurring maybe one-and-a-half times as much debt as it is producing nominal gross domestic product, even if the official GDP figures were not substantially inflated, which they most certainly are.

Therefore, just about nobody but Xi thinks this is a good time to take on America, especially with a determined Trump at the helm. Said Jude Blanchette of the Crumpton Group to Bloomberg News, “People are going to look back at this year as the pivot point when Xi Jinping overreached and sparked an international backlash against the Party and China’s development model on multiple fronts.”

That might not stop Xi. As Stephen Roach wrote in the official China Daily Wednesday, “Xi does not do capitulation.” Yes, but by resisting reasonable requests from Washington and other capitals he is effectively setting his own country on fire.

After all, “Chinese swagger” has unintended consequences, as Blohm explained to me: “It’s ‘now or never’ go for broke before eventually going broke.”