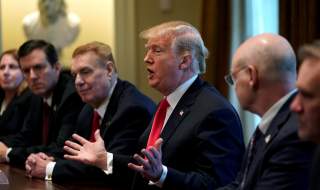 The most important of the important fault lines in America’s trade-policy debate revealed by President Trump’s announcement of aluminum and steel tariffs is the one that’s been most sorely neglected. It’s not the split between backers of the freest possible global commerce versus those more inclined to put sand in the gears; it’s not the split between champions of strengthening U.S. manufacturing versus opponents of such “industrial policies”; nor is it the difference between those who believe national-security considerations and alliance relationships should usually override economic issues versus backers of the reverse priorities.

The divide must seem counterintuitive—largely because those two ideals are almost always closely associated. But major tensions between them first burst into the open three decades ago, and the Trump tariff uproar shows that they still pose the biggest strategic questions facing Americans in their efforts to meet global economic challenges.

On one side are those insisting—in step with mainstream economic theory—that eliminating barriers to trade among countries will always produce the most prosperity for the United States and the world over the longest time span. On the other side are believers that indiscriminate trade liberalization can—and has—undermined the United States and global prosperity by enabling all manner of largely interventionist economies to rig world trade at the expense of generally open countries like America. This trade liberalization also promotes the very statism the system rightly seeks to minimize.

These claims were first made systematically in the 1980s, which is when a band of “revisionist” scholars, former U.S. officials and journalists charged that, despite their membership in the free world Cold War camp, the German and Japanese economies differed so fundamentally from America’s economy as to preclude mutually beneficial commerce. Moreover, because the economic structures of these countries were the mirror image of America’s economic structure—mainly in fostering production rather than consumption, and in prioritizing high-value manufacturing—standard trade diplomacy could never significantly open their markets to U.S. producers. Also, the secretive bureaucracies of these countries had the power to create regulatory non-tariff trade barriers, which frustrated U.S. trade negotiators because they were difficult to identify and address.

China’s integration into the global economy, capped by admission to the World Trade Organization (WTO), has revived the compatibility issue with a vengeance. For on top of the above practices, Beijing’s interventionist strategy brazenly manipulates exchange rates, fosters intellectual property theft and extortion, and seeks to spur growth by providing government subsidies for massive overcapacity in numerous products, and exporting the worldwide price-cratering surplus.

Yet although the Chinese challenge to free markets worldwide dwarfs that of U.S. allies in the 1980s, the case voiced against the actual or proposed American tariffs levied in response has scarcely changed over the past thirty years. Consumer prices will rise. Non-tariffed U.S. manufacturers will face higher input prices and lose more jobs than the trade curbs preserve. Relationships with key security partners will be threatened.

These concerns matter—as they did in the 1980s. But at least as striking is the free-trade enthusiasts’ continued neglect of how accepting Beijing’s mercantilism can threaten free markets in the United States and around the world. For example, is a growing presence of state-subsidized, artificially cheap foreign goods healthy for the American economy? Is heavy reliance on inputs priced by a foreign government, rather than by supply and demand, an acceptable, or even sustainable, recipe for competitiveness? How can turning the other cheek, or pretending that failed institutions like the WTO can bring a timely fix, bolster market practices at home or abroad and generate the expected competition-related benefits like efficiency, innovation and consumer choice?

These questions, moreover, assume added importance upon recognizing that the problem far transcends steel and aluminum. According to the European Chamber of Commerce, Beijing has also produced overcapacity in cement, chemicals, flat glass, paper and shipbuilding. P.S. Motor vehicles may be next. And barring an end for the nine-year period of sluggish global demand that’s followed the last recession, expect China and others to try to subsidize and dump ever more American industries out of existence unless a line is drawn over the two metals making headlines.

Not that the steel and aluminum tariffs lack for narrower, more conventional justifications. For instance, once the current economic recovery got on track, the after-inflation output of U.S. primary metals fell more than three times faster than the overall output of domestic manufacturing—even though the sector’s productivity grew by more than 5 percent and industry’s productivity worsened by more than 5 percent. America’s steel sector also was the only such industry in the world to lose major global production share during this period of time.

But the vital principles and interests that Americans rightly profess to value are also at stake, and the struggles to preserve them are rarely won when there isn’t a spotlight on them.

Image: U.S. President Donald Trump announces that the United States will impose tariffs of 25 percent on steel imports and 10 percent on imported aluminum during a meeting at the White House in Washington, U.S., March 1, 2018. REUTERS/Kevin Lamarque/File Photo