Trump's Tax Plan Is an Outline, Not a Strategy 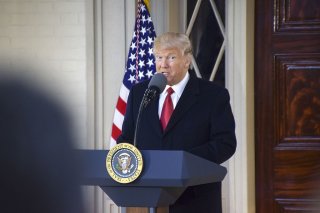 It’s not quite fair to say that President Trump has come out with a tax-reform plan. What Treasury Secretary Steve Mnuchin and National Economic Council Director Gary Cohn unveiled earlier this week is really a set of bullet points.

A reasonable enough set of bullet points, from a conservative perspective. Individual tax brackets would be cut from seven to three. The top marginal tax rate inches downward from 39.6 percent to 35 percent. There would also be marginal rates of 25 percent and 10 percent.

The corporate tax rate would be slashed from an OECD high of 35 percent to 15 percent. We would switch to a territorial system, taxing corporate profits wherever in the world they are earned, without the House Republicans’ complicated “border adjustment.”

Deductions for mortgage interest and charitable contributions would remain. The standard exemption would be doubled. Every other tax break would potentially be on the chopping block.

That all sounds good. But we don’t know the income levels at which the different tax rates apply. So that means we also don’t know whose tax bills would rise and fall. We don’t have a revenue score. The plan is pro-growth, but it seems overly optimistic to suggest that it will pay for itself, especially after years of GDP expanding anemically.

There is a reason this hasn’t been attempted since 1986. That tax reform was arguably even more ambitious. It dropped millions of Americans from the tax rolls entirely, helping to create Mitt Romney’s dreaded “47 percent.” It chopped the number of personal tax rates from fourteen to just two, with the top rate lowered all the way to 28 percent.

This tax package was bipartisan. Signed into law by President Ronald Reagan, it passed a Democratic House with the help of relatively liberal lawmakers like Chicago’s Dan Rostenkowski. In the immediate aftermath, the deficit continued to fall despite lower marginal rates.

But not everybody liked it. This included one Donald Trump, who described the 1986 Tax Reform Act as a “disaster.” During the campaign, Trump’s conservative critics brought up this comment to illustrate that he was a liberal who panned the Reagan tax cuts.

The reality is somewhat more complicated, for reasons that reveal what Trump is up against as he tries to reform the tax code himself. To achieve such drastically lower rates—the top marginal tax rate was 70 percent as recently as when Reagan took office five years earlier—it eliminated a lot of tax breaks, including incentives for holding real estate.

Being a real-estate developer, Trump obviously didn’t like this. Neither did many other people in his line of work. And there is a credible argument to be made that Trump is right that this deepened the savings and loans crisis, though the reforms were beneficial in other ways.

When you try to broaden the tax base by getting rid of the deductions and credits that litter the internal revenue code, the country as a whole may win, but individual taxpayers and businesses definitely lose.

In Reagan’s tax reform, Trump was possibly a loser. Certainly some other people in real estate were. Under Trump’s plan, people living in high-tax states who can no longer deduct their state and local taxes will be losers. A lot of the surviving moderate blue-state Republicans represent such taxpayers. That’s going to be a problem for passing the Trump plan.

Trump is unlikely to get the same kind of bipartisan cover Reagan did. With a Republican House and Senate, he does not need it (the GOP only held the Senate in 1986). But as the Obamacare fight reminded us, sweeping reforms are hard to achieve and even harder to sustain when passed by party-line votes.

Even the bipartisan 1986 reform was difficult to preserve. The top tax rate was raised to 31 percent in 1990 and 39.6 percent in 1993. The number of tax brackets eventually more than tripled.

Virtually nobody seriously talks about going back to pre-Reagan marginal tax rates. (Kurt Eichenwald’s word salad in Newsweek comes close.) There has nevertheless been a lot of backsliding since the 1980s reforms.

There are some good reasons Trump’s team spared us all the details. Tax reform is not an area in which the White House can simply write a bill and present it to Capitol Hill as a fait accompli. Congress, even under Republican control, will want to have its say.

Despite a greater Republican consensus on taxes than health care, however, the Trump administration still has a lot of work to do to get a bill on the president’s desk.