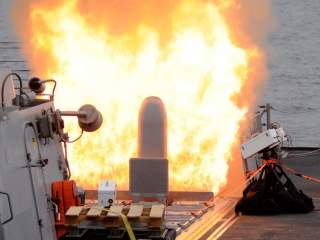 Last year, when the Assad regime gassed its own people, the Trump administration sent an unmistakable message: The unrestrained use of chemical weapons makes it difficult for the U.S. to protect its interest in the regional conflict. So ... stop.

Assad did — for about a year. In that time, the U.S. largely accomplished its goal of demolishing the Caliphate. Now, as the U.S. considers what to do next while protecting its interests over the long-term, Assad — for some reason — has decided to press his efforts to regain territory. And for him, that meant resuming the use of chemical weapons.

So the U.S., along with its British and French allies, repeated the message — the unrestrained use of chemical weapons inflames the conflict at a time when it is really in the best interests of all parties to wind the conflict down. And it did that a bit more forcefully.

And just like last time, the administration has delivered the correct and proportional response to the Assad regime’s unacceptable actions.

The strike also offers some important insights into the character of the new national security team that Trump has assembled.

The president was briefed on options for a punitive strike on Syria a little more than 24 hours before the first contrails laced across the night skies of the Middle East. Reports of in-fighting and debate may or may not be accurate, but one thing is clear: the president didn’t dither. Not only did Trump decide and execute, he did so not unilaterally, but in concert with British and French allies.

The strike also demonstrated that Trump, tweets aside, is not the distracted, impulsive or ill-disciplined leader he’s often accused of being. From day one, he has demonstrated a resolve to commit the resources and take the risks to do what it takes to get the job done. With this strike, he reminded Assad of his resolve.

The strike, of course, is not strategy, but it suggests the elements of one. As horrific and as unacceptable as the use of chemical weapons is, and as odious as Assad’s regime remains, the U.S. would not be using coercive force if there were not interests worthy to protect.

The ends of America’s strategy are clear. We can’t tolerate a return of the Caliphate. We can’t watch while Iran presses a dagger at Israel’s heart, risking a regional war. We don’t want the problems of Syria to bleed over and destabilize Iraq and Jordan. We don’t masses of refugees on the road again.

Now the challenge for the Trump administration is to transition to a regional footprint that achieves those ends in a sustained manner over time. The strike should help give the U.S. the time and space to put that presence in place.