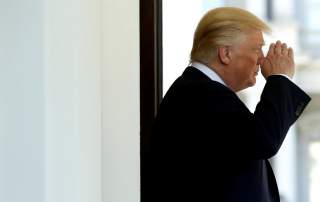 Here we go again. President Donald Trump just announced—on Twitter, completely out of the blue and without even telling the Pentagon—that he intends to ban transgender people from openly serving their country in the U.S. military.

President Trump’s announcement says that transgender people will no longer be able to serve their country. This not only discriminates against a group of fellow citizens for no good reason, but will actually undermine our national security by forcing thousands of people already serving to leave the military, while preventing many other highly qualified people from joining.

According to the president, his generals convinced him that allowing transgender individuals to serve in any capacity will burden the military with tremendous medical costs and disruption. This is patently false.

According to the Rand Corporation, the nation’s premier defense government research organization, there are somewhere between 1,320 and 6,630 transgender people currently serving on active duty—with no disruption. And the number of people initiating new treatments would be between 55 and 270, at a cost of between $2.4 million and $8.4 million (in an approximately $700 billion defense budget). This is also much less than it would cost to recruit and train the thousands of people who would be discharged.

And what about the impact on readiness? Again, according to the Rand Corporation, the impact on readiness of allowing transgender people to serve openly will be minimal. The number of transgender service members is small relative to the total force, and transgender people are currently serving with little to no disruption in operational effectiveness. There’s no reason, then, to assume that full implementation of lifting the ban would negatively affect readiness.

Why then are the generals, whom Trump supposedly consulted, apparently concerned? Looking at how they have reacted to every proposed social change since the end of WWII, it is not surprising that some of them would be concerned about this change.

For example, WWII titans like Generals Marshall and Bradley openly criticized President Harry S. Truman’s 1948 order to integrate African Americans into the armed forces. A group of admirals openly fought against Admiral Zumwalt’s attempt in the 1970s to fully integrate the U.S. Navy. In the late 1970s, the Joint Chiefs of Staff convinced the outgoing Carter administration to issue a directive claiming that military service was incompatible with homosexuality. In the early 1980s the military tried to roll back the increase in the number of women which had occurred in the Carter years. And in the 1990s, the military resisted opening up combat positions to women and President Bill Clinton’s attempt to allow gay, lesbian and bisexual people to serve openly.

These concerns were summed up by General James Mattis, in a book he co-wrote shortly before becoming Secretary of Defense, when he said, “We fear that an uninformed public is permitting political leaders to impose an accretion of social conventions that are diminishing the combat power of our military.” The current chairman of the Joint Chiefs of Staff apparently feels the same way. He openly opposed the decision by the Secretary of Defense to integrate women into combat infantry units.

However, when each of these policies were implemented, the generals not only accepted them but realized they actually improved readiness. I have no doubt that when Trump’s order is overturned, the results will be the same. This is a position shared by Senator John McCain (R-AZ), the Chairman of the Senate Armed Services Committee, and Admiral Mike Mullen, a former chairman of the Joint Chiefs of Staff. As Admiral Mullen said this week, “Thousands of transgender Americans are currently serving in uniform and there is no reason to single out these brave men and women and deny them the medical care that they require.”

Lawrence J. Korb is a Senior Fellow at American Progress. He is also a senior advisor to the Center for Defense Information and an adjunct professor at Georgetown University. Dr. Korb also served as assistant secretary of defense (manpower, reserve affairs, installations, and logistics) from 1981 through 1985. In that position, he administered about 70 percent of the defense budget.

Image: U.S President Donald Trump salutes a Marine during a departure from the West Wing of the White House in Washington, U.S., May 16, 2017. REUTERS/Joshua Roberts