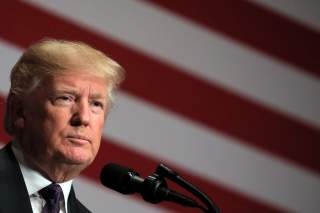 President Donald Trump’s nomination of CIA director Mike Pompeo as the new secretary of state will prove to be a useful strategy in the course of diplomatic negotiations leading up to the May summit vis-à-vis Pyongyang. One may question Trump’s decision to fire Rex Tillerson at this time, against the background of recent wave of reconciliation on the Korean Peninsula, and since someone who is for—rather than against—engagement should be heading the bargaining process, and not a hawk like Pompeo.

However, simple game-theory perspective tells us that Trump’s nomination of Pompeo cannot come at a more opportune time. For months leading up to the recent breakthrough on the Korean Peninsula, Washington and Pyongyang have been unleashing a war of words, both conducting irrationality of rationality policies, threatening each other with military means such as bloody-nose preventive attack (United States), or firing a nuclear bomb on the continental United States (North Korea). Here the logic of chicken has been in operation between the two countries.

Then, after South Korea’s special envoy’s visit to Pyongyang, North Korea, all of a sudden proposed to hold talks with both Seoul and Washington on the issue of denuclearization. Hence, from a game-theory perspective, the North has chosen to retreat or cooperate.

This is a unique situation in which the game of prisoner’s dilemma, which has regulated U.S.-DPRK nuclear negotiations, has changed into one of “chicken.”

In a prisoner’s dilemma, uncertainty and high information costs result in both sides arriving at a stalemate. Indeed, more than twenty years have passed since the first nuclear crisis. No one is to blame since there is incentive to defect in order to gain greater payoffs. However, in such a situation, crisis can be alleviated if there is third-party mediator who can resolve the information cost problem or if the number of participants to the negotiations are small as possible.

South Korea’s administration has done just that going in between Washington and Pyongyang, first through meetings in the Pyeongchang Olympics and next by sending special envoys. Hence, “mediator diplomacy” can be said to have actually worked by once again changing the payoff structure from one of chicken to prisoners dilemma.

In a game of chicken, third-party roles are usually more limited because there is incentive (more payoffs) for one side to hold ground than to back down or engage in mutual cooperation. The temptation is more so for great powers like the United States, which face low costs going into mutual defection in case the opponent decides to eventually betray.

However, soon after accepting Kim Jong-un’s request to talks, Trump seems to have once again decided to play the madman playbook. After all, North Korea’s real intentions over denuclearization are still uncertain and may not be revealed during the upcoming bargaining process. Thus, the dominant strategy in this case is for the United States becomes to defect first. If Washington defects, then the dominant strategy for North Korea becomes to cooperate rather than defect, because although being exploited is bad, it is not as bad as mutual defection—a situation in which the costs it will have to burden will be much higher than for Washington, considering its relative power.

Donald Trump is doing just that. By nominating hawks like Pompeo (and maybe even John Bolton as McMaster’s replacement), by resuming plans to conduct Foal Eagle and Key Resolve drills in April and May, which were originally put on hold to avoid inflaming tensions on the Korean Peninsula, Trump has gained the upper hand in the upcoming diplomatic negotiations.

Furthermore, just two days before his nomination, on March 12, Pompeo spoke to Fox News and said, “Make no mistake about it, while these negotiations are going on, there will be no concession made.” Hence, we can see why and how Trump’s nomination of ultra-hawk Mike Pompeo at this precise time is the United States’ optimal strategy to secure North Korea’s cooperation in the denuclearization talks in May and the diplomatic bargaining process that have recently begun.

For denuclearization talks to succeed, the United States must stand firm on its previous campaign of maximum pressure against North Korea until the May summit. Even during the talks, no concessions should be put on the table, whether that may be aborting or downsizing joint military exercises, providing economic assistance, refuting past UNSC resolutions, or signing a permanent peace agreement. Nothing should change unless North Korea’s cooperation regarding denuclearization is confirmed, which, in this case, will require complete, verifiable and irreversible denuclearization of Pyongyang’s nuclear and missile programs. Likewise, the international communities’ policy coordination efforts to fully implement UNSC sanctions must be sustained.

Ding Rongjun is an assistant professor of diplomacy at Tongji University. He is a graduate of Yonsei University and China Foreign Affairs University.