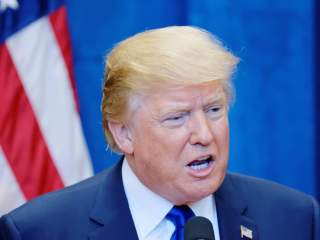 In the final Republican debate before the South Carolina primary, Donald Trump said the Iraq war was a “big, fat mistake,” that former President George W. Bush lied about the weapons of mass destruction and Republicans shouldn’t give him credit for keeping the country safe when 9/11 happened under his watch.

An outraged Jeb Bush defended his brother, who was himself drawn to the campaign trail for the first joint Bush brothers rally of the 2016 race. George W. Bush implicitly criticized Trump throughout his remarks. Both Jeb and South Carolina’s extremely hawkish senior senator Lindsey Graham compared the Republican frontrunner to Michael Moore.

Trump won the South Carolina primary. Jeb Bush is out of the race.

Let that sink in for a minute.

Perusing the exit polls, Trump won a plurality of veterans in the military-friendly state, beating his nearest rival by 12 points. He won among voters who said their top issue was terrorism, beating Bush by 22 points.

South Carolina isn’t technically winner-take-all in terms of delegate apportionment, but in this case the winner did take all. Trump not only won statewide by double digits, he swept every congressional district.

Trump argued against the foreign policy of the last Republican president in a way that even went too far, yet still it was Jeb Bush making a tearful exit from the GOP field on election night. If Trump does nothing else for the rest of the race, he will have proved that foreign policy is no longer the third rail of Republican politics. If you have the standing with a critical mass of primary voters, you can criticize even the George W. Bush-era war on terror.

How did he do it? Fairly or not, Michael Moore and the antiwar left were seen by detractors as anti-American and weak. Trump is seen as pro-American and strong. That gives him much more flexibility to oppose the Iraq war. His supporters don’t think his opposition comes from an unwillingness to fight America’s enemies.

Trump has a credibility with a high percentage of Republican primary voters that eluded previous Republican Iraq war critics ranging from Chuck Hagel to Ron Paul. The Texas congressman was seen as excessively ideological and empathetic to hostile foreign countries; Hagel was just perceived as a RINO.

By contrast, Trump is somebody who “tells it like it is.” Among the 16 percent of South Carolina GOP voters who thought that was the most important quality, Trump received 78 percent of the vote.

Not all of Trump’s voters are likely to agree with his take on the Iraq war or WMD. But it wasn’t a deal-breaker for them, just as Pat Buchanan’s opposition to the first, more popular war in Iraq didn’t keep him from winning many millions of conservative votes in the 1996 Republican primaries.

Trump has turned the war on terror inward. It hasn’t been lost on many Americans that successful acts of terror in the U.S. homeland have been carried out by people who are here. This means securing our own borders and keeping track of who is overstaying their visas could be better counterterrorism tools than redrawing the borders in the Middle East.

Nearly three out of four South Carolina Republican voters endorsed Trump’s temporary ban on non-U.S. Muslims. While only 10 percent picked immigration as their top issue, many likely see terrorism as an immigration issues as much or more than a foreign policy issue.

Not all of this is to Trump’s credit. Despite his admirable reluctance to repeat the no-win wars of the past fifteen years, he speaks cavalierly about what could fairly be described as war crimes. His recitation of apocryphal tales of bullets dipped in pigs’ blood shows a frightening degree of bloodlust toward Muslims. He evinces a callous disregard for civil liberties.

Trump is a deeply flawed vessel for challenging an excessively interventionist foreign policy, often stoking fears and encouraging sentiments that have helped build public support for a constant war footing in the first place. He is about to get a challenge from a more compelling and consistent hawk than Jeb Bush: the Floridian’s onetime protégé Marco Rubio.

Rubio is in many ways an attractive candidate: eloquent (his repetitive New Hampshire debate moment aside), relatively young, more likely to help the Republican Party cope with changing demographics than Trump, a talented politician. He is beloved by conservative elites and Republican strategists who are likely to help him get repeated second looks until he wins a primary. He tells a story that is easy to relate to for those of us who came of age as conservatives while Ronald Reagan was president.

Rubio is a more appealing face for the Republican Party’s future in every way but one: he seems hell bent on repeating the worst mistakes of George W. Bush’s foreign policy. If Rubio is elected president, Robert Gates isn’t walking through the door to the Oval Office.

Trump’s win suggests Republicans aren’t necessarily clamoring for such a repeat. Rubio’s rebound in South Carolina will test that theory.