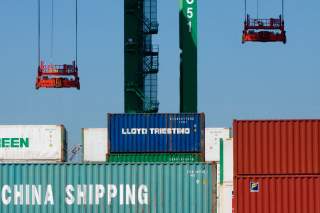 The most tangible outcome of the Mar-a-Lago meeting between President Trump and his Chinese counterpart Xi Jinping was a one-hundred-day plan to reduce trade imbalances. China expressed a willingness to end its ban on U.S. beef imports and limit exports of steel to the United States along with loosening restrictions on America’s investments in China’s financial services sector. Taken together such measures are miniscule in value but symbolically important when compared with the bilateral trade deficit of $350 billion.

For China, the objective is to avoid an all-out trade war that would have a negative impact on both sides. But the one-hundred-day plan is unlikely to fully deflect protectionist sentiments from surfacing via other channels, especially if the White House uses trade issues to press China to take a more aggressive posture towards North Korea. A faction within the White House remains fixated on the view that trade deficits are a threat to growth, jobs and security, and much of the blame belongs to China. Recent executive orders taking a bilateral approach to trade deficits and intentions to target trade partners using subsidies to “dump” their products in the United States are likely to refocus attention on China as the major culprit.

Rather than focusing on trade frictions, America’s interests should be on strengthening investment relations by concluding a bilateral investment treaty (BIT). The United States can learn an important lesson from China’s past experience: the key to strengthening competitiveness lies not in protectionist measures but by increasing the productivity of a nation’s workforce through supportive infrastructure investments. But an “America First” agenda will not easily accept that promoting U.S. investment abroad supports that vision.

It is understandable why the White House obsession with trade deficits has popular appeal. Last year, the United States imported roughly $500 billion more goods and services than it exported, and trade with China accounted for more than 60 percent of that overall deficit. If exchange rate manipulation is not the culprit, then according to this way of thinking it surely must come from China’s unfair trade practices.

This line of reasoning on trade as well as investment issues being championed by President Trump’s more populist advisers is misguided.

First, a negative trade balance does not imply slower economic growth or a weaker job market. The United States has been running persistent trade deficits regardless of whether the economy was doing well or poorly. Nor is it true that a smaller deficit is necessarily better than a larger one. In 2000, for example, the U.S. economy grew at more than twice the rate it did last year, but the trade deficit at that time of 4 percent of GDP was considerably larger than last year’s 2.5 percent.

Moreover, there is no direct link between China’s trade surplus and America’s trade deficit. The U.S. trade deficit started to balloon in 1997, while rapid growth in China’s surplus didn’t start for another six years and its size didn’t surpass Japan’s until 2006. Logic dictates that China could not have retroactively caused America’s deficit to expand a decade prior to its own emergence as a trading powerhouse.

In fact, America’s trade deficit in manufactured goods with East Asia as a whole has been roughly constant since the mid-1990s. What has changed is that China became the final assembly point for most goods East Asian manufacturers ship to the United States, so China’s surplus now makes up the lion’s share of Asia’s total surplus with America. Importantly, much of the value added of these exports is the result of components manufactured in economies like Korea, Taiwan, Japan, or even the United States itself. Thus America’s trade deficit with China neither explains the size of America’s overall deficit nor which country benefits more from the bilateral trading relationship.

Put simply, bilateral trade balances do not matter. Overall trade balances do—but deciphering whether a trade deficit should be viewed with alarm or largely as a nonissue begins with understanding that a country’s trade balance is shaped more by capital flows than trade measures. The factors that shape capital movements and their impact on trade are complex but the outcomes must adhere to certain principles.

A country’s trade balance is always equal to the gap between what a country invests and how much of that investment is financed by domestic savings. That gap is filled by the excess savings of trade surplus countries, which typically show up in their purchases of U.S. government securities or other assets. But this accounting identity does not tell us much about causality.

Economists generally agree that America’s recent trade deficits are primarily the result of inadequate domestic savings driven by large budget deficits and low personal-savings rates. Budget deficits emerged in the aftermath of 9/11 with surging military expenditures and rising social benefits while household savings rates of around 5–6 percent of personal incomes are about half of what they were two decades ago. The decline was induced by lower interest rates and the aggressive consumer lending practices of U.S. banks and retailers.

Securing the additional savings needed for investment by borrowing from abroad is reflected in an overall trade deficit. Resorting to punitive trade measures to reduce bilateral deficits does not work because actions targeting imports of one country would only result in importing more from another and lower exports nurtured by exchange rate appreciation, leaving America’s overall trade deficit unchanged.

But America’s trade deficits are also affected by capital inflows from the excess savings of trade surplus countries, such as China, Japan, Germany and the oil-rich nations. Their surplus savings are drawn to the United States given its deep capital markets, helping to keep interest rates low and the dollar strong while providing the financing needed for the U.S. government and households to overspend. Thus causality runs both ways. America’s trade deficits are being driven by domestic policies that encourage excessive consumption but this is made possible by the excess savings being provided by trade surplus countries like China.

For China’s trade surplus to decline, it needs to reduce its high savings rate. Its “excessive” frugality is the result of both a cultural affinity for saving and complex structural factors, including a rapidly aging population and weak financial and social security systems. These issues are being addressed by China’s leadership, but it will be many years before they can be fully resolved, which means that trade surpluses will persist.

Meanwhile, moderating U.S. trade deficits requires increasing its net savings through budget reforms and encouraging households to save more. In this spirit, few realize how this relates to the failure to reform America’s healthcare system. Many advanced economies are able to provide both universal coverage and quality services at a lower cost than the United States and in doing so they are less dependent on foreign savings for financing their investments.

But even these savings-enhancing measures cannot fully succeed because only the United States has the privilege of running a forty-years-long “perpetual trade deficit” since the U.S. dollar is the dominant global currency for trade and reserve purposes. The related demand for dollars makes it structurally overvalued. The result is that exports are penalized and imports encouraged, practically guaranteeing a trade deficit.

Regarding the second concern—foreign investment—a BIT that opens China’s market to more U.S. investment would generate the profits and linkages needed to create more jobs at home. China has one of the most restrictive investment regimes of any Organisation for Economic Co-operation and Development country for services. The 2017 American Chamber of Commerce survey noted that: “China’s environment now discourages investment, with eight in ten firms saying they feel foreign companies are less welcome than in the past, and more than 60 percent having little or no confidence that the government is committed to opening China’s markets further.” Liberalizing market access in services such as financial, communications, information technology, entertainment and education and not trade-related issues is the highest priority for U.S. firms operating in China. Doing so would also be good for China by putting more pressure on its own companies to become more innovative, especially since they now have the scale to stand on their own.

With this line of reasoning, the solution to America’s economic concerns is ironically the same as it was for China decades ago. Rather than resorting to protectionist measures, China lowered trade and tariff barriers in joining WTO while it poured massive funding into infrastructure. This combination drove an increase in labor productivity of around eight percent annually for several decades—three times that of other comparable economies—helping China to become a major manufacturing export power even as its currency was appreciating.

Both Republicans and Democrats have acknowledged that America’s deteriorating infrastructure base needs to be addressed to strengthen economic competitiveness. China has much to offer both financially and technically to support such efforts. There are legitimate security concerns about Chinese companies, especially state-owned firms investing in the United States. But much of the recent Chinese investment in the United States has been private, and any security concerns can and are being be handled by the interagency Committee on Foreign Investment in the United States. For many U.S. firms operating in the services sector, China is an attractive investment opportunity that allows them to expand their global presence, which ultimately enhances America’s economic security.