Trump's War against the DC Establishment Isn't Going Away 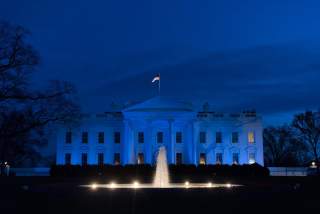 The testimony by acting FBI director Andrew G. McCabe today before the Senate Intelligence committee contained no bombshells. He mildly disputed the notion that former director James Comey did not enjoy much support within the FBI. But otherwise it was a fairly anodyne hearing.

The excitement came from President Trump himself, who performed something of a U-turn on the issue of who bears responsibility for firing Comey. It is not always easy to keep up with the Trump administration. On Tuesday, Press Secretary Sean Spicer issued a statement saying that Trump “acted based on the clear recommendations” of the Justice Department. Then on Wednesday Vice President Mike Pence said that Trump had fired Comey on the recommendation of the Justice Department. He noted, “Let me be very clear that the President’s decision to accept the recommendation of the deputy attorney general and the attorney general to remove Director Comey as the head of the FBI was based solely and exclusively on his commitment to the best interests of the American people and to ensuring that the FBI has the trust and confidence of the people this nation.”

But today Trump indicated that was not the case. He didn’t hem or haw about his desire to rid himself of Comey. Instead, he said he was the Decider. In an interview with NBC’s Lester Holt, Trump was firm and decisive in stating that he had decided to fire Comey no matter what: “I was gonna fire regardless of recommendation. Regardless of recommendation I was going to fire Comey.” For good measure, he denounced Comey as a “showboat” and a “grandstander.” So much for the administration’s efforts over the past few days to depict Trump as acceding to the advice of Deputy Attorney General Rod Rosenstein, who was apparently threatening to resign in indignation over the contention that he was the author of Comey’s ouster. Trump himself apparently believed that firing Comey would be a popular move among both Republicans and Democrats. There can be no doubting that Comey was in fact a lousy director of the FBI who should have resigned before being issued a pink slip by Trump. But the administration’s maladroit handling of the matter has simply emboldened its adversaries rather than defusing the issue of Russia and the Trump campaign.

Then there is Trump’s meeting with Russian foreign minister Sergey Lavrov yesterday. The administration is claiming that it was hoodwinked by the photos that the Russian press distributed of Trump and leading Russian officials. “They tricked us,” a White House official said to CNN. “They lie.” Hmmm. Trump took considerable heat for meeting with Lavrov right after he had sacked Comey. What was the point of the meeting if his administration was going to dish it out to Moscow? How could it possibly have been unaware that the photos would not be made public and, for that matter, why bar the American press from covering the powwow?

Meanwhile, Democrats are gearing up to further paste Trump by depicting him as an agent of the Kremlin. In a Washington that is in permanent scandal mode, with each political party seeking down to bring down a president from the opposite party (see: Benghazi), the Trump administration maneuvers are tailor-made for creating a new Watergate. Ever since Watergate, Congress has increasingly substituted partisanship for politics.

Trump may be wagering that he can ride out the kerfuffle over Comey, just as he has repeatedly emerged from what was deemed crisis after crisis in the past, only to see him emerge largely unscathed. Trump is a professional survivor. By the end of his first term he might look like the Houdini of politicians. But a new poll from Quinnipiac, taken before the Comey tumult, suggests that the Trump magic may be losing some of its sheen, including for his base. The poll indicates that his support among white voters without college degrees and independent voters is eroding. 48 percent of white men says he is doing a good job. 58 percent of voters say his first hundred days in office were “mainly a failure.” In addition, the poll notes, “By a 54 - 38 percent margin, American voters want the Democratic Party to win control of the U.S. House of Representatives. This is the widest margin ever measured for this question in a Quinnipiac University poll, exceeding a 5 percentage point margin for Republicans in 2013.” The danger for Trump is that congressional Republicans will defect from him en masse in coming months if they believe that a so-called wave election will inundate their chances in 2018. The reason why Richard M. Nixon ultimately resigned from office was that Republican elders such as Sen. Barry Goldwater told him in August 1974 that his support on Capitol Hill had vanished. “None of us doubted the outcome,” Goldwater wrote in his autobiography. “He would resign.”

Already speculation about Trump’s future is rife. Writing in the Washington Post, Jim Hoagland muses that Trump may only want to be a one-term president: “Given that he will be 74 at the end of his mandate, Trump may even prefer to go out in a blaze rather than a whimper. I of course can’t be sure that is his intent. But his actions almost guarantee that result, whatever his intentions may be.”

Maybe. But the Democrats have their own host of issues, and Trump’s presidency remains in its infancy. If Trump plays his cards right, he could revive his presidency. So far, however, he has failed to deliver on most of his campaign promises, ranging from building the wall to overhauling Obamacare, from tax reform to an infrastructure plan. It’s unclear whether he recognizes that it will take more than a fusillade of tweets aimed at his detractors to resuscitate his political fortunes, or that they are even in trouble.