Trump's War on the Deep State 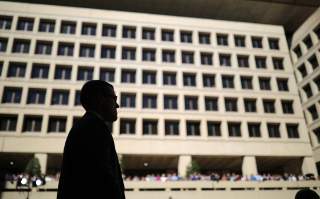 IN WASHINGTON now, the “deep state” generally means officially nonpartisan and politically inactive people who are in and near government, and are in practice partisan and often hyperactive in their opposition to the administration. This sort of thing occurs to some degree in almost every administration, but is rare once new administrations have settled in and installed loyalists in all key positions. In contentious times, during rending national controversies and after a radical change of administration, and especially when there is widespread media hostility to an administration, the phenomenon is more noticeable. In living memory, the most egregious antics of the deep state—widespread efforts to disrupt and discredit the administration—have been in the presidencies of Richard Nixon and Donald Trump.

The two sets of circumstances are easily distinguishable. Nixon came to office in 1969 and was the first president since Zachary Taylor in 1848 not to have his party in control of either house of Congress when he was inaugurated. North Vietnam had made it clear in its rejection of President Johnson’s 1966 Manila offer of joint withdrawal that Hanoi sought the complete humiliation of the United States. If Ho Chi Minh’s ambition was simply to unite North and South Vietnam, he would have accepted Johnson’s offer, waited the decent interval and reinvaded with no danger that the United States would plunge once more into that quagmire. Nixon inherited the Democrats’ war in Vietnam and preferred to extract the United States while trying to preserve a possibility for the survival of a non-communist regime in Saigon. For declining simply to surrender all Indochina to the tender mercies of the North Vietnamese, the Vietcong, and the Khmer Rouge and Pathet Lao, Nixon was undercut and harassed by advocates of defeat and shame in Vietnam, many of whom, like Daniel Ellsberg, had been happy enough to escalate the war before becoming activist advocates of the virtues and moral necessity of American defeat.

Nixon’s legal problems ramped up over his mishandling of Watergate. It was essentially caused by hawkish zealots in the administration and the Republican National Committee engaging in amateurish and ill-considered counter-harassment of antiwar activist members of a Democratic Party that simply wanted to leave Vietnam at once “by plane and by boat.” As the president became vulnerable, the whole administration became a seething hotbed of enemies of Nixon, leaking his tax returns and reams of secret documents and intelligence about Vietnam and other matters. There has never been any conclusive evidence that Nixon himself committed illegalities, but members of his entourage did, and executive authority evaporated by the week. Nixon, patriot as he was, resigned rather than subject the country to an impeachment trial. The deep state won; Congress cut off all aid to South Vietnam; it fell to the communists and millions died. The disaster was complete, and part of the legacy has surely been a relative inferiority in the quality of candidates for high public office since then, the coarsening of political discourse and increased cynicism of the political press, and the intoxication of federal politicians with the high-stakes game of criminalizing policy differences. None of it shows any signs of ending. Quite the contrary.

This is why Donald Trump went to war against the entire political class: all factions of both parties, the bureaucracy, the national media, the lobbyists, Hollywood and Wall Street. He said the whole system was rotten and had failed the nation: hopeless wars that accomplished nothing except the wastage of thousands of lives and trillions of dollars, the extension of Iranian influence and an immense humanitarian crisis, a flatlined economy, a shrinking workforce, increasing poverty and crime, oceans of debt, large trade deficits from trade agreements that exported unemployment to the United States and the unmonitored influx of millions of illiterate peasants from Latin America. He ran nearly three million votes behind his Democratic opponent, Hillary Clinton, though he won the Electoral College clearly enough, and 96 percent of the 312,000 votes cast in the District of Columbia were against him. Almost everyone of influence in the country, including virtually all the Congress of both parties, was opposed to him. For the first nine months of the new administration, there was the constant confected threat of impeachment. The phantasmagorical imbecility that Trump had somehow colluded and connived with the Russian government to rig the election was the excuse of the hapless Clinton and her Trump-hating echo chamber in the national media for the election result.

The deep state was almost the whole state, and it pitched in to sabotage the administration. For nearly that long, the Republican leaders sat on their hands waiting to see if he would be impeached or not. His nominees were a long time in being confirmed. There were leaks of White House conversations, including with foreign leaders—outright acts of insubordination causing Trump, a decisive executive, to fire some fairly high officials, including the malign director of the FBI, who then informed Congress that he had leaked a self-addressed memo (probably illegally, as it was technically government property), in order to have a special prosecutor named to torment the president over the fatuous Russian allegations, although Comey testified that Trump himself was not a target or suspect and the Russians had not influenced the outcome of the election. (This was a sober position compared to the wholesale fabrications of the Democratic vice chairman of the Senate Intelligence Committee, Mark Warner, that a thousand Russian agents had swarmed the key battleground states and had delivered Wisconsin to Trump.)

The president has strengthened the White House staff. The FBI and Justice Department have been ripped apart in their partisanship and misuse of the dossier on which the collusion argument and the surveillance of the Trump campaign were based. And the dossier, a pastiche of falsehoods from gossips in the Kremlin, has been exposed as a smear job paid for by the Clinton campaign and Democratic National Committee, and the whole impeachment movement has collapsed. The hunters are the prey and Trump will prosecute, sack, or intimidate the deep state. But it is there, can arise quickly and can be very dangerous. Forewarned is forearmed.

Conrad Black is a writer and former newspaper publisher whose most recent book is Richard M. Nixon: A Life in Full (PublicAffairs, 2007).