Trump's Withdrawal from the INF Treaty Formalized What Was Already True 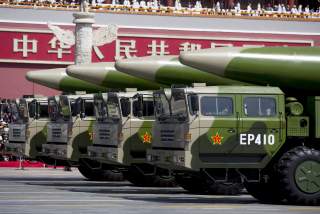 President Donald Trump announced on October 20 that he would withdraw from the Intermediate-Range Nuclear Forces Treaty (INF) agreed upon by Ronald Reagan and Mikhail Gorbachev more than thirty years ago. Inspired by the nuclear near-miss of the Cuban Missile Crisis, the agreement was designed as a de-escalation measure in what turned out to be the final days of the superpower standoff between the United States and the Soviet Union.

It is widely assumed that Trump’s National Security Advisor, John Bolton, is behind the move. Bolton is visiting Moscow this week for talks on foreign policy and national security. He has long advocated that the United States should withdraw from the INF Treaty.

From a military standpoint, the INF Treaty was a dead letter right from the start. For example, it covered only land-based missiles. So even under the INF Treaty, both the United States and the Soviet Union (later Russia) could position intermediate-range, nuclear-armed ships and submarines right off each other’s coasts. And the treaty doesn’t prohibit missiles with ranges greater than 5500 kilometers. (3418 miles), which of course can hit targets within that range if required.

So why would anyone sign such an empty treaty in the first place? The answer is simple: money. On the American side, Ronald Reagan was desperately trying to climb out of the deficit hole he had dug in his first term. Banning entire weapons systems like the Pershing II ballistic missile and the BGM-109G cruise missile allowed Reagan to make massive cuts to defense procurements without seeming soft on the Soviets. And as we now know, Mikhail Gorbachev and the Soviet Union were facing a system-wide economic meltdown. They couldn’t even afford the weapons they had, never mind developing new ones.

Fast forward thirty years and the resulting gaps in each country’s arsenal have largely been filled. While sticking to the letter of the treaty, both sides have infringed on the spirit of the treaty to such an extent that the agreement itself is now mostly meaningless—so far as the United States and Russia are concerned.

Today’s Russia, with no real allies and an economy less than one-tenth the size of America’s economy, cannot possibly hope to compete with the United States in a high-technology arms race. But China is another matter. The Trump administration is pressing hard for reform in China just as China’s planned economy is starting to falter, and China can ill afford significant new defense spending on top of its existing buildup.

As things stood last week, China was free to develop intermediate-range carrier-killer missiles at its own pace, with no direct pressure from the United States or Russia. China’s DF-26 ballistic missile and DH-10/CJ-10 cruise missile seem to fall squarely inside the parameters of the INF Treaty. Now China may face some competition.

If Xi Jinping is smart, then he will back down on expensive weapons systems development before China goes too far down the Soviet road—and he finds himself in the same retirement home as Gorbachev. China should come to the table and endorse the status quo in the Pacific. For as the Soviet Union found out thirty years ago, expansionism comes at a steep cost. Bolton seems prepared to teach Xi that simple historical lesson.