The Truth Behind Russia’s Navalny Protests 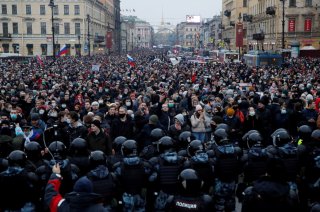 Throngs of protesters took to the streets last Saturday in what the Russian authorities have called “unsanctioned” demonstrations. Nominally, the actions were aimed at protesting the recent arrest of Russian opposition figure Alexei Navalny. But as the day unfolded, the demonstrations took on the form of a generic anti-government protest. The police were dispatched to disperse the crowds, resulting in a slew of violent clashes. There were reportedly 3,500 arrests in total; of the 1,373 arrested in Moscow, over 700 were released over the weekend. Attendance tallies remain somewhat contested. Early reports noted as many as 40,000 protesters had gathered in Moscow alone, but more recent estimates have seen that number revised down to around 15,000 in the capital and thousands more in major Russian cities including St. Petersburg and Vladivostok.

Although far from trivial in scale, the protests sparked by Navalny’s detention appear not to have attracted nearly as many participants as the 50,000-strong anti-government protests of 2019. This deflated attendance is perhaps at least partly the result of preemptive measures taken by Russian authorities. In the days leading up to the demonstrations, Russian officials told students—and their parents—that participation in Saturday’s protests will be recorded and reported to their schools; university students were issued similar warnings.

There is little question that the protests, and the measures taken by Russian police to quell them, have been a thorn in Russian President Vladimir Putin’s side. The demonstrations would have been a political liability at any time, but especially in the run-up to Russia’s September parliamentary elections. Not only Navalny’s supporters but potentially any Kremlin opponent can now claim to have been the victim of a repressive regime that criminalizes dissent.

Even so, Washington’s policy approach must incorporate a series of long-overdue truths about the Kremlin and the state of the Russian opposition. First, it is grossly premature to view the Saturday protests as a popular referendum on the Kremlin. There is no compelling evidence that a significant portion, let alone anywhere near a majority, of Russians support the violent overthrow of the Putin government. According to the most recent polling data, President Vladimir Putin’s approval rating sits steadily in the mid-60 percent range. Navalny’s YouTube videos on government corruption have garnered millions of views, but it does not follow that every Russian who agrees with his anti-corruption messaging would vote for him in a presidential election. Navalny is keenly aware of this; it is why he developed what he calls “smart voting,” an electoral strategy encouraging Russians to vote for any viable candidate who is not a member of the ruling United Russia party.

Then there are the protesters themselves. They were drawn from a haphazard coalition that included liberals, radical socialists, communists, and varying shades of nationalists, united less by political allegiance to Navalny than by their shared opposition to the Kremlin. Outside of Moscow, many of those who partook in Saturday’s events were regional activists protesting what they see as the Kremlin’s negligent approach to Russia’s far eastern periphery. Still, many others were teenagers and schoolchildren, swept along by viral social media posts. The demonstrations encompassed a broad slice of what is a complex and amorphous Russian opposition culture, but one thing is clear: the anti-Kremlin demonstrators were not a homogenous ideological bloc with a common set of political demands.

Some of these groups were guided by what can broadly be described as a commitment to Western-style liberal democracy, but far from all. It is not at all clear that the numerous sub-factions represented at the protests, such as the supporters of the jailed left-wing populist Nikolai Platoshkin, were fighting for anything even remotely approaching the liberal values that President Joe Biden seeks to promote overseas. Things are even more tenebrous on the foreign policy front. Not only do these groups not support pro-EU or pro-NATO approaches, but many of them believe that Putin’s policies have been far too accommodating of the West. Take, for instance, the Communists, who were prominently represented at the protests. The Communist Party supports the immediate recognition of Donbass, endorsed Putin’s military intervention in Syria, and maintains that Crimea belongs to Russia. Are these really the champions of liberal democracy that the Biden administration would like to uplift?

The Saturday protests reaffirm what has been true since the 2011 Bolotnaya Square protests, when National Bolsheviks, monarchists, communists, anarchists, LGBT activists, far-eastern separatists, and an assortment of self-proclaimed liberals joined forces in a makeshift bid to expel Putin from the Kremlin. There is no singular “opposition” for Washington to support—no unified alternative ideology, least of all one palatable to the West, to replace the current Russian state and institutions. The Biden White House must reckon with this inconvenient reality as it formulates not only a formal response to the protests but a comprehensive policy approach to Russia over the next four years.