Truth Or Consequences: There’s a Strategic Need for Nuclear Modernization 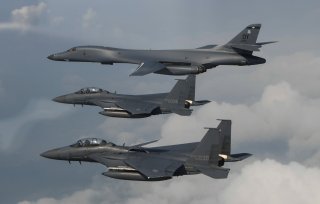 Meanwhile, Russia’s mobilization and deployment of more than eighty thousand forces around Ukraine, including nuclear-capable Iskander missiles, reveals something of Russian nuclear strategy.  Both these events show that, despite much hand-wringing, nuclear weapons serve no purpose other than to deter other nuclear weapons. Governments act on the belief that these weapons serve many critical political-military and thus strategic functions. Moreover, the trend appears to be running against reductions in favor of larger nuclear arsenals in the belief that high-end wars, which have an inherent escalation potential, are increasingly likely.

​The need for nuclear modernization has to be seen in this light.  While the anti-nuclear community still argues for unilateral reductions or for cutting the budget to eliminate one or another leg of the triad, other governments,  not least Russia and China, are modernizing and building new and innovative nuclear and space platforms.

This trend is not confined to U.S. adversaries. For example,  Great Britain has announced its intention to increase its nuclear arsenal by 40 percent from 180 to 260 weapons.  The reasons for this increase instead of a previously planned reduction of nuclear weapons are clear. “However, in recognition of the evolving security environment, including the developing range of technological and doctrinal threats, this is no longer possible.”  Similarly, the French military now believes that it must prepare for high-intensity war.

​The Ukraine crisis shows this assessment is well-founded and that Moscow believes and acts on the assumption that nuclear weapons serve multiple positive security objectives. Russia clearly believes and says that its nuclear weapons deter conventional threats, i.e.  threats by NATO to defend itself and posit-Soviet states.

By deploying strategic bombers and nuclear-capable Iskander missiles around Ukraine during the current crisis, Moscow also displayed its belief that such a show of force will intimidate both Ukraine and NATO-to include the United States. Indeed, there is little cognitive space in Russian definitions of deterrence between that term and outright intimidation (Ustrashenie).

​In other words, in the real world, the idea of solely using nuclear weapons to deter other nuclear weapons and the idea that one or more arms of the triad are dispensible are not accepted in practice by nuclear-armed governments.

Various governments like Russia are still looking for ways to use nuclear weapons as active ingredients of their military-political strategy. In Russia’s case, it has over twenty nuclear weapons programs or delivery systems currently underway while the Pentagon expects China to at least double its arsenal in the current decade.

Therefore, a dispassionate assessment of our nuclear arsenal and the lessons of history that show that modernization is necessary. America has never achieved progress in disarmament without convincing Moscow that Washington is capable of arming to match and supersede anything Moscow comes up with.  That includes low-yield nuclear weapons which Moscow has championed since 1999, i.e.  before Vladimir Putin became president and which high-ranking officials have more than once said could be used in warfare.

​Under the circumstances and in view of the fact that a bipartisan consensus has formed around the indisputable necessity of nuclear modernization since Secretary of Defense Robert Gates called for it in 2008, unilateral disarmament makes a nuclear country’s deterrent and policies quite literally incredible.

As the UK government observes, its nuclear deterrent is and must remain credible for now and in the future given the current international situation.

That situation undoubtedly comprises Moscow’s efforts to obtain escalation dominance (escalate to win as the Vice Chairman of the Joint Chiefs of Staff Air Force Gen. John Hyten described it) at every stage of a crisis by possessing credible and prominently deployed nuclear capabilities of short-, medium- and long-range capability as well as both counterforce and counter-value capabilities.

​Thus, in the current Ukraine crisis, Moscow tried to dominate the escalation “ladder” by mobilizing enormous numbers of combined conventional forces plus nuclear-capable weapons, all the while making threats  that Ukraine risked destruction. And this came about merely because Kyiv and the U.S. asserted that they would defend their interests against persisting Russian  “low-intensity” threats as the war Moscow initiated in 2014 continues.

​Numerous strategists have noted that in war the other side gets a vote and if that vote is not taken seriously, then that failure inevitably becomes a disadvantage.  The failure to grasp the strategic reality that U.S. adversaries regard nuclear weapons as multi-functional and usable weapons does not make the mantras of sole use any more truthful. If anything, then that failure forces America to confront the strategic nullity that such slogans represent. To be credible and effective, a strategy must take its point of departure from reality, not wish-fulfillment. The desire to effectuate unilateral disarmament strictly on the belief that others will follow America’s moral leadership or equally unjustifiably unrealistic strategic perspectives will not make the world safer—quite the contrary.

Policy recommendations that oppose nuclear modernization amount to unilateral disarmament and a betrayal of U.S. allies. Such recommendations do not merit serious consideration, whether killing Ground Based Strategic Deterrent, cutting the number of Columbia-class submarines, or eliminating the Long Range Standoff Weapon or bomber cruise missiles, as well as upgrades to America’s regional NATO-based extended deterrent. The idea that if Washington simply shows restraint then its adversaries will do the same is ultimately the triumph of hope over reality. And, after all, “hope is not a strategy.”

Peter Huessy is president of Geo-Strategic Analysis of Potomac, Maryland, a guest lecturer on nuclear deterrent policy at the US Naval Academy, and previously senior defense consultant at the National Defense University Foundation for 22 years.