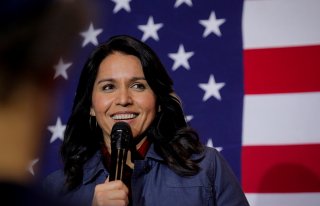 Rep. Tulsi Gabbard (D-Hawaii) faced immediate backlash after breaking with the Democratic party in a new legislation that clarifies Title IX protections for female athletes are based on “biological sex,” which would ban transgender girls and women and non-binary people to participate in these programs.

Title IX is most notably known for preserving equal treatment and support for women’s sports programs, as it protects people from sex-based discrimination in any school-related program receiving federal aid. A federal judge ruled that Title IX applies to transgender women and therefore cannot be excluded from a female sports program.

The Protect Women’s Sports Act, co-sponsored by Rep. Markwayne Mullin (R-Okla.), orders that any school that grants “a person whose biological sex at birth is male to participate in an athletic program or activity that is designated for women or girls” would be unable to get federal funds.

“Title IX was a historic provision . . . to provide equal opportunity for women and girls in high school and college sports. It led to a generational shift that impacted countless women, creating life-changing opportunities for girls and women that never existed before,” Gabbard said in a statement.

But she noted the law is “being weakened by some states who are misinterpreting Title IX, creating uncertainty, undue hardship and lost opportunities for female athletes. It is critical that the legacy of Title IX continues to ensure women and girls in sports have the opportunity to compete and excel on a level playing field.”

Mullin echoed his colleague’s remarks, adding that “Title IX was designed to give women and girls an equal chance to succeed, including in sports. Allowing biological males to compete in women’s sports diminishes that equality.”

The Oklahoma representative also said the legislation will “safeguard the integrity of women’s sports and ensure female athletes can compete fairly.”

But the initiative, which is unlikely to pass in a Democratic House, faced brutal criticism, as one transgender activist dubbed it as “blatantly transphobic.”

“Remember when @TulsiGabbard tried to convince us she was an LGBTQ ally?” wrote Zeke Stokes, former chief programs officer for GLAAD. “We knew she was a liar, a fraud. Here’s the proof.”

The outgoing four-term representative also received pushback after homophobic remarks from 2004 were uncovered. She had labeled the LGBTQ community “homosexual extremists.” Gabbard later apologized for the remarks.