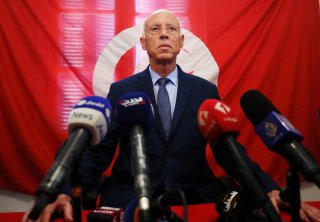 In the weeks to come, Tunisian politicians and citizens will continue to argue over whether President Kais Saied’s executive actions on July 25—unilaterally dismissing Tunisia’s prime minister, suspending its parliament, and declaring a state of emergency—constituted a “coup.” It is already clear, however, that certain regional actors are clearly hoping that it proves to become one. While official reactions from the Arab states have largely urged calm and conciliation, media outlets in Egypt, Saudi Arabia, and the United Arab Emirates (UAE) have overtly favored an end to democratic politics in Tunisia.

Although it lacks the tremendous geostrategic and geopolitical value of other Arab countries such as Egypt and Saudi Arabia, Tunisia is very important in other, mostly symbolic, ways. In December 2010, Tunisia became the birthplace of the “Arab Spring,” a series of uprisings across the Middle East that led to the fall of several authoritarian Arab leaders, including former President Zine el-Abidine Ben Ali. In the years after the 2011 revolutions, and following crackdowns against political reformers in the Arab Gulf states, a military coup in Egypt, and bloody civil wars in Libya, Syria, and Yemen, Tunisia has continued to pursue parliamentary politics, earning it a reputation as the sole success story of the Arab Spring. For this reason, preventing democracy from in the North African country has long been important to regional Arab dictators, which have feared the threat democratic movements pose to their control, as well as the danger of well-organized Islamist parties gaining power through democratic elections in the Middle East.

The supporters of anti-democratic politics have played an important role in Tunisia’s political landscape. Through the media networks that these forces control, they have helped push negative messages about Ennahda, Tunisia’s largest political party, which is Islamist in character but politically moderate and to some extent secular.

The Gulf region has been involved heavily in Tunisia after the Arab Spring, and intra-Gulf disagreements have influenced the country’s politics. On one side, Qatar, which largely supported the Arab Spring, forged close ties with Tunisia’s leadership, provided financial aid to Tunis, and played host to Saied, former Prime Minister Hichem Mechichi, and Speaker of Parliament (and Ennahda chairman) Rached Ghannouchi in three separate visits in November 2020 and May 2021.

However, Qatar has been opposed regionally by the United Arab Emirates, which has spent years building up strong networks in Tunisia and developing relationships with financial institutions, politicians, media outlets, and businessmen. While capitalizing on many Tunisians’ legitimate anger and grievances with government inefficiency and corruption, the UAE has worked to spread narratives in Tunisia that attribute all the country’s problems to Ennahda and other Islamists. As Ghannouchi put it, “[the UAE] has taken upon itself the idea that the Arab Spring was born in Tunisia and must die in Tunisia.” A further sign of Emirati influence over Saied came when, in the hours after the crisis began, Tunisian police raided the offices of Al Jazeera, a Qatari state-owned media organization long opposed by the UAE.

Without the West playing a decisive role in defense of Tunisian democracy, the counter-revolutionary states will be keen to capitalize on Tunisia’s current turmoil. Just as the Trump administration’s decision to withdraw from Libya led to the Emiratis waging an increasingly militarized, muscular, and bellicose foreign policy in that war-torn country, the absence of a well-defined and active American or French role in Tunisia could also lead to Abu Dhabi filling the void.

Based on the tepid response from Washington, Paris, and the other Western capitals—none of which have yet described Saied’s actions as a “coup”—the West will probably approach Tunisia’s political crisis with a measure of flexibility. To be pragmatic about defending their national interests in Tunisia, Western states do not want to burn bridges with Saied, regardless of whether Tunisia stands on the brink of dictatorship or not. Given the terrorist threat of the Islamic State (ISIS) in Tunisia and other North African countries, the United States and France would probably be willing to accommodate an autocratic Saied to maintain cooperative relations with Tunis in the domain of counterterrorism.

Within this context, it is doubtful that the West will do much to push back against Tunisia’s counter-revolution. If history is any guide, then Western states have no problem working with unelected governments that ousted democratically elected ones, with President Abdel Fattah el-Sisi’s Egypt being a salient case in point. When it comes to Tunisia, however, the Biden administration has a real chance to prove that its rhetoric about restoring democratic values to U.S. foreign policy and breaking from former President Donald Trump’s supposed habit of courting authoritarians—an accusation leveled by then-candidate Biden during the 2020 presidential primaries—is genuine.

While the Biden administration understandably has other priorities in the Middle East and North Africa, from the stalled nuclear talks with Iran to the Yemen conflict and the complicated situation in Libya, the White House should not ignore events in Tunisia. Given the extent to which Tunisia and Libya’s futures are intertwined, U.S. leadership will have a harder time encouraging Libyan parties to resolve their problems through peaceful means if there is instability in Tunisia. Moreover, the health of democracy in Tunisia is directly connected to Libya’s democratic growth and vice versa. Put simply, if the administration is serious about resolving the Libyan crisis, it cannot ignore Tunisia.

There are also national security interests at stake for Washington. With grave concerns about ISIS and Al-Qaeda-linked militias in the Maghreb and Sahel, officials in the United States and Europe must consider the ways in which such extremists could exploit the demise of Tunisian democracy. These reactionary voices have long opposed Tunisia’s democratic system of governance, and its failure could embolden those who have always maintained that democracy would fail in Tunisia and elsewhere in the region. By standing in defense of the rule of law and democratic institutions in Tunisia, the United States and Europe can play their parts in ensuring that this is not the outcome.

Dr. Khalid al-Jaber is the Director of MENA Center in Washington, DC. Previously, he served at al-Sharq Studies & Research Center and as Editor-in-Chief of The Peninsula, Qatar’s leading English language daily newspaper. Al-Jaber is a scholar of Arab and Gulf Studies, and his research focuses on political science, public diplomacy, international communications, and international relations. He has published scholarly works in several academic books and professional journals, including the World Press Encyclopedia, Sage, and Gazette.