Tunisia's Success Story Is an Illusion 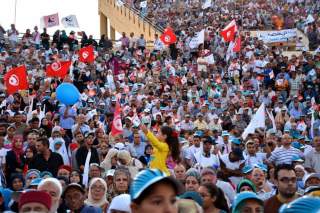 Most world powers have welcomed the election of Beji Caid Essebsi, Tunisia’s new president, as a victory for democracy. At home, however, Essebsi’s victory was immediately followed by two nights of violence in multiple areas of the country. With 40 percent of voters— mostly the country’s increasingly disillusioned youth— this abstention is the other winner of the elections.

Western countries are desperate to find a bright spot in an increasingly chaotic region, and it is no wonder that, three years after Syria, Libya, Egypt, Yemen, and Tunisia each experienced their own "Arab Springs," Western powers chose the latter as their shining example. In light of the situation in the other countries, however the title of “model student” is quite relative. More importantly, the wave of positive articles and congratulations should not hide the growing division within the country, which explains why, despite Tunisia being celebrated as an example of democracy in the Arab world, it is also a primary source of foreign fighters for the Islamic State in Iraq and Syria.

The country is fractured along two main lines. The first is the division between a young and still largely unemployed generation and other, more senior generations. For the country’s youth, the latest elections, which ended with a duel between Essebsi, who turned 88 this year, and his 79-year-old rival, Moncef Marzouki, was the symptom of a persistent issue rather than the culmination of the revolution. The revolution, which the youth started three years ago, failed to fundamentally change the composition of the Tunisian elite. It also inadvertently resulted in the worsening of the economic situation for the very same segments of the population that had confronted the authoritarian regime of former President Zine el-Abidine Ben Ali.

The second divide comes from the widening economic gap between the country’s coastal areas, particularly its northern part, which represent the economic backbone of the country,  and its less developed, less westernized, and often marginalized inner regions. Popular discontent among residents of Tunisia’s inner regions periodically sparks outbursts of anger, with residents fighting over public jobs, denouncing the lack of economic opportunity, and sometimes setting ablaze local political or governmental buildings. This marginalization is not new, but rather the result of policies from a highly centralized government. Yet, years after Mohammed Bouazizi set himself ablaze in 2011 in the Sidi Bouzid Governorate, it is telling to that the place where it all started was also marked by the highest level of abstention during the recent election.

In light of the dissonance between the stunning, yet misleading, success of the Tunisian revolution, and the increasing sentiment among the part of the population that have been left out, this “success” is dangerous. It also partly explains why, despite its banning and a broad crackdown on its members, jihadist groups such as Ansar al-Sharia in Tunisia or the Islamic State continue to find new Tunisian recruits.

Ansar al-Sharia, a jihadist group responsible for the storming of the U.S. Embassy in Tunis in 2012, understand and have capitalized on this divide. Before the group was banned, it frequently organized “humanitarian” trips to outlying areas, where the government had virtually disappeared following the fall of the former regime. It centered its activities in the same regions that felt left out due to both decades of mismanagement from the authoritarian regime and the revolution itself.

In a relatively short period of time, when the group was considered to be a “political party” and could thus operate freely, Tunisia’s main militant organization managed to deeply embed itself with part of the population in Tunisia. It is because of these deep roots that the continuing crackdown has yet to neutralize Islamist radicals.

Ansar al-Sharia is not the only jihadist group betting on Tunisia’s inability to solve its socio-economic strife and the despair of its youth. A few days before elections, the Islamic State published a video depicting three of its Tunisian members calling for the boycott of the elections. More importantly, these three jihadists took credit for the killing of two opposition MPs and called for Tunisians to join their ranks and fight against the “infidel” Tunisian government.

The risk is that, as Tunisia is seemingly “out of the danger zone” following the last elections, the West might lose interest in the tiny North African nation. In Tunisia, the new administration itself, along with other political figures, may be blinded to the potentially explosive frustration of a significant part of the population and return to contentious politics, as was highlighted by Mr. Marzouki’s bitter speech and veiled accusations of fraud after his defeat.

However, Essebsi did state his willingness to “work together without excluding anyone.” Let’s hope that these are not mere words, or the Arab Spring’s “model student” could otherwise turn into its most blatant disappointment.

Michael Horowitz is an intelligence analyst working for Max-Security Solutions, a geopolitical risk consulting firm based in the Middle East.