Turkey’s Demands Meet Reality When It Comes to Syria 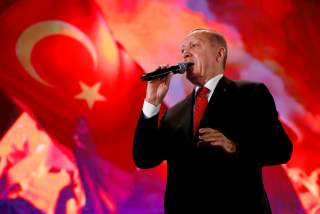 The United States is caught between its best partner against ISIS and the second-largest NATO army, as Turkey presses the United States for a foothold in northeastern Syria at the expense of the Kurdish-led Syrian Democratic Forces (SDF). But the impasse could end soon.

After a tense week of negotiations, the U.S. embassy in Ankara issued a sanguine statement on Wednesday announcing an agreement on “initial measures to address Turkey’s security concerns,” the creation of a joint U.S.-Turkish operations center and efforts towards repatriating Syrian refugees.

Turkey’s own defense minister, Hulusi Akar, announced that the negotiations have been “constructive” and his U.S. counterparts have come “closer to our position.”

Public bluster by Turkish president Recep Tayyip Erdoğan has forced the United States to respond, but its demands may be tempered by geopolitical realities. And the U.S. Department of State, led by Special Envoy James Jeffrey, has pushed the SDF to accept concessions aiming to appease Turkey.

Turkey accuses the SDF of backing Kurdish separatists within Turkey. Since the 1980s, the separatist uprising and state crackdown have killed tens of thousands of people, mostly in the Kurdish-majority southeastern corner of Turkey.

On Sunday, Erdoğan threatened a Turkish invasion of the SDF-held territory east of the Euphrates, where two thousand U.S. troops are stationed as part of the fight against ISIS, warning that “patience has an end.” And the Washington Post reported on Monday that U.S. negotiators were making a “last ditch” offer to remove all SDF forces and begin joint U.S.-Turkish patrols in an eight-seven-mile wide and nine-mile deep corridor along the Syrian-Turkish border.

The next day, the balance seemed to swing in the other direction. The Washington Post had been told that the Trump administration does not claim the authority to defend the SDF by force, but Secretary of Defense Mark Esper threatened to “prevent” any “unilateral incursion” by Turkey.

“When I started my job as an analyst at the Washington Institute nearly two decades ago, I would say the U.S. military was Turkey's biggest friend in Washington. Now it is Turkey’s biggest adversary,” said Soner Cagaptay, director of the Turkish Research Program at The Washington Institute for Near East Policy, citing divergences in Iraq and Syria policy.

“In the discussions with Turkey, the U.S. has made it clear that the SDF will manage northern and eastern Syria for the foreseeable future,” Nicholas Heras, a Center for a New American Security fellow with direct knowledge of the talks told the National Interest. “It’s a slow walk toward a U.S. chaperoned Turkish presence east of the Euphrates.”

Bassam Ishak, the Syrian Democratic Council’s diplomat in Washington, told the National Interest that the current agreement is ambiguous, but set down the SDF’s red lines for its interpretation. He said that the SDF may accept a “Turkish presence in patrols” but not a “stationary Turkish presence” in any future safe zone, and that “it is not acceptable” for Turkey to move “jihadi” proxies into the area.

A few hours after the U.S. embassy’s announcement, Loqman Ehme, a spokesperson for the SDF-aligned Autonomous Administration declared via semi-official media that “James Jeffrey also said that they won’t impose anything the North and East Syrian Administration won’t accept.”

He added that any safe zone “must be governed by the region’s own people, execution must be local and migrated persons must return to rebuild their life. Our territory fulfills all three conditions. Our zones are safe zones.”

“Jim Jeffrey seems to have accepted that a limited safe zone would not derail U.S. efforts, the last-ditch efforts to defeat ISIS, but the only way we can really see this work is if the SDF and the YPG clearly agree to some sort of Turkish involvement here in the north,” said Merve Tahiroğlu, an analyst at the Foundation for the Defense of Democracies, referring to the People’s Defense Units (YPG) that form the core of the SDF.

A “chaperoned” Turkish presence alongside the SDF would be is a significant step down from Erdoğan’s previous demand for a twenty-mile deep Turkish-run “safe zone” free of the SDF along the entire 290-mile border.

“What Turkey wants is not to take over the whole area, but to cut into it with narrow belts of five to ten mile width, trying to reach down to the highway twenty miles down so that this is not a contiguous YPG entity, but it's broken into two or three pieces,” Cagaptay told the National Interest, mentioning the central M5 road as a core Turkish objective.

If Turkey took the whole territory, then “there would be both exodus of Kurds and also an insurgency afterwards, which is why I think Turkey’s goal is not to go for big cities, because it would risk urban insurgency in the aftermath, and not go for Kurdish-majority areas, but really keep it small at the time being for Arab-majority areas,” he added.

After months of threatening the SDF, Turkey invaded the SDF-held district of Afrin in January 2018. By the end of the grueling campaign in April, the United Nations Office for the Coordination of Humanitarian Affairs estimated that 137,000 people had fled the Kurdish-majority region, compared to the 150,000 who remained. Turkish-backed forces have reportedly forcibly displaced even more since. More than a year later, the SDF-backed insurgency is still festering.

Ehme’s Wednesday declaration demanded an end to “invasion, pillaging and tyranny in Afrin” as a condition for any safe zone.

With its safe zone proposal, Turkey is “certainly looking to remove the YPG political leadership and military leadership from the town of Kobani and Tel Abyad,” Tahiroğlu said, “so in that sense it will be similar to what it did in Afrin, but I don't think they're looking for a medium to long-term occupation.”

In addition to the costs of a violent invasion, the risk of a U.S.-Turkish military confrontation has held Turkey back. Unlike in Afrin, the SDF-held territory east of the Euphrates hosts two thousand U.S. troops in the fight against ISIS.

“It’s unimaginable for two NATO allies to get into such a position,” Tahiroğlu told the National Interest. “I’d like to believe that despite all of the problems in the bilateral relationship, this is still a step too far for Turkey.”

“Given that there is CAATSA sanctions looming, and Trump’s personal talks with Erdogan on that matter, it seems like Trump is trying to use that as leverage to get Turkey to nudge a little,” she said, referring to the Countering America’s Adversaries Through Sanctions Act of 2017. Under the new law, Turkey’s recent purchase of S-400 air defense missiles from Russia should have triggered sanctions, but President Donald Trump has pushed back against Congress in implementing them immediately.

The practical realities of the fight against ISIS have also restrained Turkish actions against the SDF. The SDF is currently holding ten thousand ISIS prisoners at the infamous Hawl camp. For the SDF to abandon the fight against ISIS and jeopardize the stability of former ISIS territory, in order to defend against Turkey, would be a “disastrous outcome,” Tahiroğlu claimed.

Destabilizing former ISIS territories further would work against the return of refugees, one of Erdoğan’s primary goals in demanding a safe zone. Turkey currently hosts around 3.6 million Syrians. A worsening economy and losses for Turkey’s ruling party have soured public opinion towards the Syrian population, and Turkish authorities have begun deporting tens of thousands to the Turkish-occupied areas of Syria, including Afrin.

“That’s a rare issue that unites most of Turkey’s citizens that are otherwise divided into anti- and pro-Erdoğan camps,” Cagaptay said. “So, he’s going everything that he can to make sure that the safe zone is large enough that he can accommodate more than a few hundred thousand, perhaps more than a million refugees.”

Ishak told the National Interest that it would be unacceptable to the SDF for Turkey to repatriate Syrian refugees to “change the demography of the region according to [Turkish] wishes and interests.”

According to the Syrian Observatory for Human Rights, at least 429 deportees have been killed by Turkish border guards trying to re-enter Turkey from Syria.

“Those refugees, many of them right now, are long-term, and essentially permanent residents of Turkey at this point. There’s going to have to be more discussions in Ankara about how to absorb these people into society, but I think with the safe zone, part of the idea is to return some of the refugees back to this land,” Tahiroğlu said. “Unless there is a political solution, it's going to be very hard for Turkey to achieve any of its effort towards this end.”