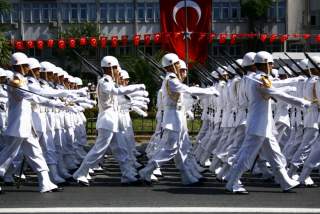 Despite heightened media reporting that Turkey has been planning a full-scale intervention in Syria, Prime Minister Davutoglu has repeatedly tried to dismiss these rumors saying this past week, “No one should expect that Turkey will go into Syria tomorrow or in the near future. It's speculation.” Having just hosted a high-level American delegation in Ankara to discuss the situation in Syria and joint efforts to defeat the so-called Islamic State, many observers are prone to believe the prime minister. However, the real man to watch may be his political patron, President Recep Tayyip Erdogan.

Turkey has already deployed further artillery and missile batteries and added additional troops on the Syrian border over this past weekend as President Erdogan called an unprecedented National Security Council meeting without an elected government in place yet. In addition, the Armed Forces leadership has called a meeting for this weekend to discuss a proposed intervention to establish a buffer zone in northern Syria. Talk of intervention is being considered at a time when Washington has been focused on defeating ISIS through working closely with “effective partners” on the ground in the form of Kurdish forces and regional allies. While Saudi Arabia, Turkey and Qatar’s backed opposition militias are laying siege to President Assad’s remaining positions in Aleppo, they still do not have a unified command structure and there is little consensus on what a post-Assad Syria might look like. Key to any future regional calculus in Syria is understanding the reasoning of one man, President Erdogan, who seems determined to assert Turkish leadership and can be a powerful spoiler for all future developments.

President Erdogan’s recent convocation of the National Security Council in Ankara to discuss a potential intervention is more substantive than purely rhetorical bluster. Ankara presently has 54,000 troops stationed on the border and is reportedly mulling deploying four hundred more armored vehicles to the border for a potential incursion. The president’s contemplation of increased actions seems driven by his assessment that the situation across Turkey’s southern border is becoming unsustainable, along with his own domestic political considerations. Erdogan has a limited window to take such decisive action before the formation of the new coalition government under Davutoglu, which may constrain his present autonomy in foreign- and defense-policy decision making.

President Erdogan’s changing assessment of the threat environment is driven by three degrees of threats Syria poses. For Erdogan, President Bashar al-Assad and the Kurds are the most immediate threats in his view (and ISIS is a distant third) to Turkey’s national security. Washington disagrees with this assessment and has been trying to convince Ankara to focus on defeating ISIS by making peace with the Kurdish forces that have been the most effective American partners on the ground against ISIS. The high-level American delegation that just visited Ankara and the ongoing dialogue do not seem to have changed Erdogan’s calculation that many of the other Islamist groups in northern Syria are sympathetic to the Sunni-predominant Turkey and remain his best potential partners in defeating Assad.

The most recent terrorist attacks in Kobani, which have sparked renewed Kurdish accusations of Ankara turning a blind eye to ISIS’ activities, and the People’s Democratic Party (HDP)’s electoral gains in the June 7 elections have precipitated the latest animosity between Erdogan and the Kurds. The once-promising Kurdish peace process in Turkey has come to an end with these elections, which catapulted the HDP’s leader, Selahattin Demirtas, to becoming Erdogan’s new arch political nemesis. Unlike the traditional and nationalist opposition parties that have long-standing ideological disputes with the Justice and Development Party (AKP), the HDP and Demirtas in particular made it personal to Erdogan. Further, old fears of a Kurdish homeland, which includes parts of Anatolia have returned with a vengeance amongst the Turkish political elite. President Erdogan’s once-warm relations with the Kurdistan Regional Government’s president, Masoud Barzani, helped stem the anger resulting from Ankara’s lukewarm response to the first Kobani offensive last fall, but this is no longer enough to prevent the clear splits in Kurdish and Turkish nationalism within the country and the region today.

In Erdogan and Davutoglu's worldview, the Ottomans represent the golden age of rule for the Sunni world and gave the currently stateless Sunni Arabs of the Maghreb and Kurds a natural home. Recent developments in Syria and Iraq have only heightened Turkish fears about their growing refugee population and what impact this would have on the AKP’s political position in Turkey. Rather than being the champions of the Kurds, the AKP (and Erdogan in particular) has become vilified as their oppressor. Rather than responding with the types of forward-thinking rhetoric and policies that characterized the Kurdish peace process Erdogan and the AKP championed several years ago, they have reacted like every other Turkish nationalist government of the past. Erdogan has publicly reminded the Turks of the tragic lost decades of the 1980s and 1990s where a civil war in Turkey claimed over 30,000 lives against the Kurdistan Workers’ Party (PKK), of whom the Syrian Democratic Union Party (PYD) is an offshoot.

While Prime Minister Davutoglu has signaled cautious support publicly for any military action Erdogan chooses to take, there are signs of differences between him and the president. Erdogan, as the first popularly elected president of Turkey, has three more years of uninterrupted rule, whereas the prime minister is in a less stable position, needing to form a government coalition, which in all likelihood will collapse before the completion of its term. Depending on the character of the next government and Davutoglu’s coalition partners, Erdogan’s actual power as president may become more constrained. Despite the prime minister’s repeated promises that Erdogan will remain the central figure in Turkey’s new government, all potential coalition partners, to varying degrees, want the president to return to the ceremonial role his office is accorded by the constitution, rather than continue to exercise the extraordinary informal power he has exerted since his election as president.

President Erdogan’s immediate constraint on military action is more operational than political, given that the formation of a new coalition government is still weeks, if not months, away. Throughout his thirteen years in power, Erdogan has waged a low-scale war with the Turkish military, whose political power in the state has been diminished. Despite strong civilian control of the military, a deep lack of trust exists presently between the military and the president. Erdogan will need the military’s support for a sustained and successful operation.

Lacking military support, Erdogan has been focused on rallying Turkey around the nationalist cause of defending the homeland from problems across the border and the deepening “Kurdish threat.” The president is aware that most public-opinion polls in Turkey show a majority of Turks oppose an intervention in Syria. Yet with the Syrian Kurds’ strong territorial gains in northern Syria and the fact that they have proven to be the only effective fighting force against ISIS, along with the empowerment of Turkish Kurds in the recent election, Erdogan has played on these fears to whip up nationalist and populist support among the secular political and military elite for military action in Syria.

As the most successful politician in Turkish history since Ataturk, and having an uncanny knack for sensing the national mood, observers shouldn’t underestimate Erdogan’s ability to use this as an opportunity to take such decisive action. As long as Turkey is in coalition negotiations, all eyes will be on Erdogan to see whether he takes preemptive actions to establish a buffer zone aimed at curtailing Kurdish gains in northern Syria. Depending on what actions he takes, the emerging coalition may be saddled with Erdogan’s actions while he reaps the potential rewards as he has the unparalleled benefit of the presidential bully-pulpit and loyal media coverage.

While there is a short-term risk of an adventurist foreign policy under Erdogan that any new coalition government in Ankara will quickly try to reel in, there is an immediate risk of unintended consequences. A terrorist attack in southeastern Turkey or a Turkish military attack on Kurdish forces within Syria could dramatically change the situation on the ground for Erdogan. The president is presently willing to take a calculated risk, but a full-scale escalation or breakdown in relations with Erbil or Washington seems unlikely. Mobilization and heated rhetoric seem to be the most likely courses of action presently. In the long term, the consequences of his actions in the absence of a new government could shape the type of president he will continue to be for the next three years, as well as his future and popularity in the longer term.

Joshua W. Walker, Ph.D. is a Transatlantic Fellow at the German Marshall Fund of the United States and a former Senior Advisor at the U.S. Department of State. Andrew J. Bowen, Ph.D. is a Senior Fellow and Director of Middle East Studies at the Center for the National Interest.