Is Turkey About to Assault Syria’s Kurds? 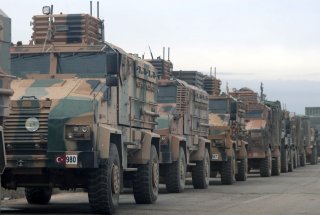 Following an October 10 missile attack that killed two Turkish policemen in northwestern Syria, Turkish president Recep Tayyip Erdogan stated that Ankara had “no tolerance left” and was “determined to eliminate threats” originating in Syria. Is a new Turkish military operation imminent against the Kurdistan Workers’ Party (PKK), a militant group that has been designated a terrorist organization by both Turkey and the United States, and its U.S.-backed Syrian branch, the Kurdish People’s Protection Units (YPG)?

Fears of the impact of Kurdish separatism and spillover into Turkey have already triggered three Turkish military interventions into Syria. In 2016, the Turkish military launched Operation Euphrates Shield, a campaign to uproot ISIS from an 80-mile stretch of the Turkish-Syrian border and prevent the YPG from creating a contiguous canton across the entirety of northern Syria. Operations Olive Branch, the 2018 campaign to control the Kurdish-controlled city of Afrin and northwest Syria, and Peace Spring, the 2019 assault against the YPG in northeastern Syria, have only served to expand Ankara’s reach and challenges. 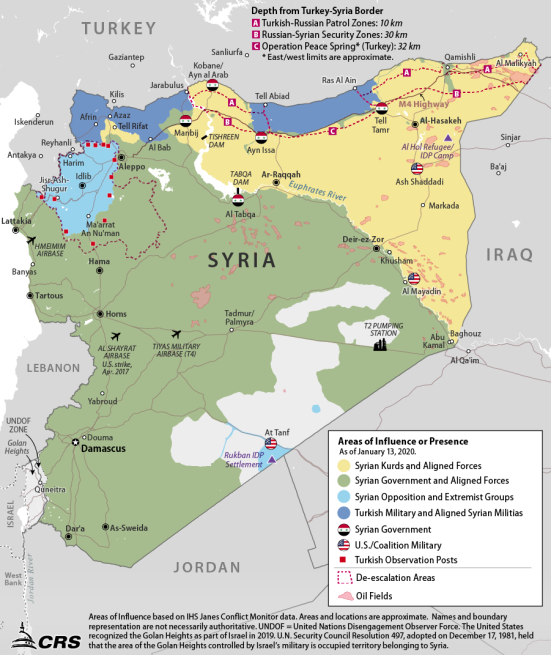 The state of Syria’s civil war as of January 13, 2020. Image courtesy of the Congressional Research Service.

Indeed, Turkey is now mired in a frozen conflict; Ankara is responsible for managing and protecting millions of Syrians while contending with offensives by the Syrian government and its Russian and Iranian allies. Moreover, abuses and atrocities committed in areas under Turkish control have provoked a fierce Kurdish insurgency and regular attacks against Turkey’s security and proxy forces. The strike on October 10 was only the latest in a long-running series of attacks, but it may be the impetus for further geopolitical shifts in Syria.

In fact, in response to the October attack, Al-Monitor reports that Turkey began mobilizing its Syrian opposition allies—even summoning some of their leaders to Ankara—in advance of an operation against the Syrian Democratic Forces, a U.S.-backed umbrella militia group in which the Kurdish YPG is the dominant fighting force. Soon afterward, Syrian president Bashar al-Assad reinforced the YPG-controlled city of Tell Rifaat in the northern Aleppo Governate to deter a potential Turkish offensive, much as Assad regime forces did in October 2019 to repel a Turkish assault (Operation Peace Spring) on the YPG in the northeast.

However, in contrast to 2019, when Ankara and Moscow agreed to have the Turkish and Russian militaries jointly patrol a safe zone along Syria’s northern border, Russian and Turkish troops now find themselves on opposite sides of a looming battle in the northwest. To be sure, as recently as September 26, Reuters reported that the Russian Air Force, Assad’s Syrian Arab Army, and Iran-backed militias pounded a number of northwestern Syrian villages near the Turkish-controlled cities of Idlib and Afrin with airstrikes and artillery fire, killing at least five Turkish-backed fighters and injuring a dozen civilians. Turkey then marshaled its own reinforcements to bolster its position and staunch the exodus of additional refugees that threaten to overrun both Turkey and Europe.

Tensions remain high, though there is reason to believe that a crisis can be averted. Despite that a new military campaign in Syria could help Erdogan rebound from political and economic troubles at home—much like initiating Operation Euphrates Shield one month after the July 2016 coup attempt helped Erdogan regain domestic and international standing—Turkey’s president has his hands full administering Idlib and Afrin in the northwest and various Syrian proxies and cities in the northeast. He may prefer avoiding additional escalation.

Mazlum Kobane, the commander in chief of the U.S.-aligned Syrian Democratic Forces, certainly thinks this is the case. As Kobane told Al-Monitor in early November,

Erdogan has always sought the support of international actors before embarking on a military intervention here. He’s made threats and continues to make threats. He insists he will intervene and will continue to insist. In doing so he is looking to prepare the ground for an operation. However, the existing situation in northeast Syria is different now. […] In my view, unless Turkey gets the approval of either Russia or the United States, Erdogan cannot take such a step. And as far as I am aware there is no such approval.

Kobane has a point. In mid-October, Turkish officials signaled that Ankara would postpone any military operations until Erdogan met with U.S. president Joe Biden on the sidelines of the G-20 in Rome on October 31. Erdogan arrived at the meeting with an extended parliamentary mandate for military operations in Syria in hand, before engaging in “positive” discussions on Turkey’s expulsion from the F-35 stealth fighter program, its bid for the F-16V fighter jet, and human rights with Biden. Although both leaders later announced the formation of a “joint mechanism” to manage relations, official statements did not suggest that a deal on Syria was forthcoming.

Consequently, it is unclear for how long Erdogan will heed Biden’s warning against taking “precipitous actions” that would harm the U.S.-Turkey relationship. On November 1, the day after their bilateral meeting, the Turkish president declared that “there is no stepping back from” additional cross-border operations in Syria. Thus, while Turkish officials argue that Syria has no military solution, Erdogan and Foreign Minister Mevlut Cavusoglu have made clear that Ankara will intervene if Russia and the United States do not fulfill their political promises and accept their “responsibility” for the recent violence. Likewise, Turkey has regularly sought European support for the purpose of exiting its Syrian quagmire to little avail; Ankara has argued that rather than criticizing and sanctioning Turkey for its intervention, the West should be grateful that the Turkish military has prevented the Assad regime, Russia, and Iran from slaughtering their way across northern Syria, producing destabilizing refugee crises in the process.

Accordingly, if the United States and Europe cannot propose or implement a solution to Erdogan’s Syrian troubles, he will ultimately turn to Russia for an alternative, or be forced to go it alone. As Syrian journalist Ibrahim Hamidi recently assessed, Russia has occasionally turned a blind eye to Turkey’s interventions in Syria in exchange for territorial or political concessions, and could do so again. Will Moscow greenlight Erdogan’s new operation in exchange for “liberating” Idlib from terrorists or regaining control of the pivotal M4 Highway? If the United States wants to keep Turkey close, rather than seeing Ankara fall further into Moscow’s orbit, and remain in the driver’s seat in Syria, rather than being left responding to events occurring outside of its control, it must assuage Ankara’s concerns, not let them fester.

Adam Lammon is the Managing Editor of The National Interest and a Junior Fellow in Middle East Studies at the Center for the National Interest. He received his master’s degree in Security Policy Studies from George Washington University’s Elliott School of International Affairs. He tweets @AdamLammon.