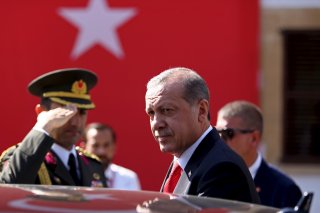 In 1974, the Turkish Army invaded Cyprus over fears that the Greek junta would try to annex the island. Any excuse for Turkish forces to remain in Cyprus quickly evaporated, however, when the Greek junta collapsed and Greece reverted to democracy. Still, Turkish forces remained on the island in pursuit of a long campaign of ethnic and sectarian cleansing. Today, the Turkish Republic of Northern Cyprus, the proxy state that Turkey established, controls one-third of the island.

While the international community recognizes Greek Cypriots as victims of Turkish aggressions—no country other than Turkey recognizes Northern Cyprus’ sovereignty—the island’s ethnic Greeks are not Turkey’s only victims. Rather, Turkey now appears to be pursuing a campaign of cultural genocide against the island’s traditional Turkish community.

Shortly after the Turkish invasion, Turkish settlers began arriving in northern Cyprus. The Turkish government, eager to bolster the numbers of ethnic Turks and Muslims on the island, encouraged the migration. Many were poor agricultural workers who moved into the houses left behind by Greek Cypriots.

While there has been no legitimate census, many estimates say the Turkish settlers and their offspring make up half the population of the Turkish-occupied zone. Speculation grew in recent years, however, that settlers could outnumber true Turkish Cypriots. Such conjecture is correct. While great sensitivity surrounds the topic, sources say the true number of Turkish Cypriots today number approximately 90,000 while the settlers now number between 160,000-200,000.

The reason for the acceleration of settlement, Article 49 of the Fourth Geneva Conventions notwithstanding, is a deliberate decision by Turkish president Recep Tayyip Erdoğan to drown out Turkish Cypriots. His methods differ and the scale is smaller, but what Turkey now does in northern Cyprus is not in its outcome far different from what the Han Chinese do in Xinjiang.

Erdoğan’s motivation is religious intolerance. While many diplomats and activists describe the struggle for religious freedom as one between religions, often the chief victims of religious bigotry are those deemed insufficiently pious or orthodox within a religion. This is why, for example, Pakistani authorities increasingly target their country’s Ahmadis, while Saudi Arabian authorities harass the kingdom’s Shi’ite community in the Eastern Province and the Sufi community in Hijaz. Erdoğan is a Muslim Brotherhood acolyte. He has long targeted Turkey’s Alevis and other heterodox sects. His wrath has also extended to fellow Sunni Muslims should he deem them insufficiently conservative. Military officials and diplomats recalled after the 2016 “Reichstag Fire” coup, for example, faced imprisonment until and unless they could find Sunni extremist mullahs to vouch for them.

Herein lies the problem for Turkish Cypriots. Historically, Turkish Cypriots are very moderate and tolerant. While there were bouts of sectarian tension after the island’s 1960 independence from British control, intermarriage between the country’s Muslim and Christian communities was not unheard of in the years and centuries before and even, to a lesser extent, after. They drank alcohol and, at least until the 1974 invasion, they socialized with their Greek neighbors. They were, in essence, Muslims in the way many Kemalists are Muslims: They appreciated their cultural heritage and might get married in a mosque, have the village imam bless a new child, or fast for the first few days of Ramadan, but they did not let Islam dominate their life. Many Turkish Cypriot women went unveiled too.

They were, in essence, not much different from Greek Cypriots. The most recent settlers, however, care little for Cypriot culture. Both male and female settlers turn their backs on Cypriot traditions and treat indigenous Turkish Cypriots no better than they would Christians. Rather than create jobs and build schools for the Turkish-occupied zone, Erdoğan not only constructs new mosques but also funds radical preachers who would be more at ease in the Taliban’s Afghanistan than they would in the bistros or beaches of Cyprus.

The world should care. While Erdoğan has played the UN peacekeeping and monitoring mission like a fiddle, his actions make a political settlement less likely. With little true connection to the country or culture, the settlers vote for the least tolerant, most hardline politicians. Ersin Tatar, the current Turkish Cypriot president, is a case in point. He may claim democratic legitimacy, but he failed to win the majority of true Turkish Cypriots. He is, in effect, an illegitimate puppet put in place by colonists more loyal to Turkey than Cyprus.

The lasting damage, however, will not only be political and diplomatic but also cultural. Erdoğan’s policy now subordinates and suffocates the population whose protection was the justification for the Turkish invasion in the first place. Simply put, Erdoğan today poses a greater threat to Turkish Cypriots than the irredentist Greek junta did prior to 1974.