Turkey Has Turned Itself Into a Terrorist Target 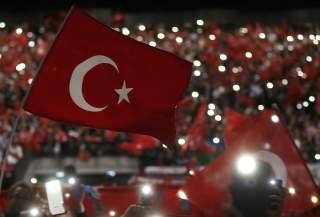 Between the second half of 2015 and late 2016, Turkey experienced different kinds of terrorist attacks, which resulted in hundreds of dead and caused serious damage to the country’s economy. In 2016 alone, tourist arrivals fell by about 30 percent compared to the previous year, leading to a significant reduction in foreign-exchange reserves and general economic deterioration. Partial trend reversal has been recorded in 2017, with no high-profile attacks reported (leaving aside the New Year’s Eve attack). External and domestic factors explain the improved security situation, but the medium-term outlook seems uncertain.

On New Year’s Eve, an Uzbek man armed with Kalashnikov (subsequently identified as Abdulkadir Masharipov) killed thirty-nine people in an Istanbul nightclub. The attack—later attributed to the Islamic State—was the peak of a spiral of violence that began in summer 2015 with the double Islamic State suicide attack in Ankara (109 dead and five hundred wounded), and fuelled fears about Turkey's future, with the country more and more compared to almost-failed states like Iraq and Pakistan.

The country has suffered major attacks in previous years. For example, in 2013 two car bombs caused more than fifty deaths in the town of Reyhanlı, which is just a few kilometers from the Syrian border. Still, terrorist attacks haven’t been so frequent and significant to such an extent that doubt could be cast on Ankara’s very institutional stability and—even more so—its ability to protect citizens and foreign investment since the summer of 2015.

At least fifty-five terrorist attacks were reported in 2016 alone, which is more than 70 percent of the seventy-six attacks that have occurred on the European continent. Three of the five most serious attacks in 2016 took place on Turkish soil. The one that occurred in Istanbul on June 28 killed forty-eight people. Another attack, this one in Gaziantep on August 20, left fifty-seven dead. Finally, in Istanbul, on December 10, 2016, forty-eight additional people were killed in an attack.

Since July 2015, Kurdish violence, which is mainly limited to the southeast of Turkey (where Kurds are the majority), has caused at least 1,200 deaths (especially among the security forces). In 2016 alone, about 70 percent of the attacks on Turkish soil were Kurdish. In addition to the Kurdish Workers’ Party (PKK), Turkey is also a base for other separatist armed groups that have stepped up their activity in the last few years by means of high-profile attacks. It is, for example, the base of the Kurdistan Freedom Hawks (TAK), which has mostly hit Istanbul, Ankara and other major cities.

The jihadist threat, which has grown since the rise of the Islamic State in Iraq and Syria, has mostly led to attacks in crowded places and, in some cases, hitting foreign targets. For example, twelve Germans and one Peruvian were killed in a suicide attack in old Sultanahmet District on January 12, 2016.

Lastly, Turkey faces a threat (less serious than the other two) posed by far-left groups, particularly the Revolutionary People's Liberation Party/Front (DHKP-C). This situation is due to domestic issues such as the strong sociopolitical polarisation that mainly affects urban centers. These groups tend to attack government targets and U.S. assets, but lack the resources and capacity to conduct high-profile attacks.

The Reasons for the Terrorist Wave

There are both domestic and external reasons behind the spiral of violence that has affected the country since the second half of 2015.

Undeniably, the regional security deterioration in Syria and Iraq has caused the terrorist threat to significantly rise, allowing different armed groups to proliferate. However, Ankara’s policies have ended up causing a multiplying effect, which has ultimately paved the way for the series of attacks on Turkish soil.

As we know, Ankara has long been accused of an ambiguous attitude towards the regional jihadist groups. In the years immediately following the outbreak of the Syrian civil conflict, Turkey was used as a logistical base for the Syrian opposition (including jihadist organizations) and as the main corridor for the so-called foreign fighters, which have increased the ranks of fighters in Syria and Iraq. Although there is no evidence of Turkey's direct support to the jihadist groups, checks along the Syrian border were quite inefficient, at least until the Islamic State threat prompted the Turkish authorities to take a hard-line approach. For example, in July 2015, following the Suruc bombing, Turkey authorized its NATO allies to use its Incirlik Air Base for military operations in Syria and Iraq and conducted air operations against Islamic State. Prior to this change, Turkey long had Bashar al-Assad’s removal, rather than neutralizing jihadism, as its foreign-policy priority. The “open-door policy” that has been adopted by the Ankara authorities has had the side effect of encouraging jihadist cell proliferation in the country. Many of the Turkish nationals who went to Syria and Iraq to fight in the ranks of the Islamic State and other jihadist groups are Islamist Kurds who were once part of Hezbollah (a Marxist group mainly active in the nineties that was created to counter PKK hegemony). In other cases, the deserters were radical Islamists from the most conservative regions of Turkey, including Central Anatolia and the major urban centers (Istanbul, Ankara, Izmir).

The Ankara government’s initial indirect support to active jihadists in Syria has further complicated relations with the Kurdish community, which is at the forefront of the struggle against the Islamic State and other groups. The Turkish authorities started negotiations with the PKK in 2012 that resulted in a March 2013 cease-fire. However, the fears arising over the Kurdish side becoming too strong in Syria and Iraq coupled with Erdoğan’s alleged intention to win back nationalist support in preparation for the November 2015 election made the government stricter on the negotiations issue and gradually sidelined the previous agreement. Accordingly, the cease-fire was declared definitively over in July 2015, right when the terrorist wave began.

The New Year’s Eve attack on Istanbul’s Reina nightclub was the last major incident in the country.

Additionally, the construction of a wall along the border with Syria, which should be completed by the end of this year, and the implementation of an integrated border-security system (through the installation of surveillance systems, thermographic  cameras, surveillance radars, remote controlled weapon systems, command and control centers, seismic and acoustic sensors and lighting systems) have certainly helped the security forces effectively prevent potential terrorist infiltration from Syria. Enhanced security in Turkey and at the border coupled with the Islamic State becoming weaker in Syria and Ankara’s military operations has shielded Turkey from major attacks.

The security operations, known as “Shield Euphrates,” were launched in August 2016 and officially ended in March this year. Nonetheless, Turkey is still present in the country. In political terms, Ankara has proved to have become more pragmatic by taking a less and less hard line on the Assad regime. Turkey is giving up—at least for the time being—its hegemony goals. It now seems as if the country has shifted to a dual-target strategy: stabilizing the regional and domestic-security situation and preventing the creation of a Kurdish autonomous entity in Syria and in Turkey. It is likely that these goals will inspire Ankara’s agenda in the short- to medium-term future and lead to closer cooperation with regional actors such as Russia and Iran.

The terrorist threat is bound to remain significant, and various factors will likely impact the Turkish security situation.

Iraqi Kurdistan’s independence referendum has had a political and symbolic meaning to the Kurdish communities living in Turkey and other countries in the region. It’s outcome could push armed groups to step up their efforts and perhaps use the successful struggle against the Islamic State and resulting international legitimation. In Turkey, this could translate to an upsurge of attacks on military and political targets and an increase in Kurdish political propaganda.

A new wave of jihadist attacks is not to be ruled out in the short- to medium-term future. According to the Turkish authorities, more than five thousand suspected Islamic State militants were arrested and around 3,300 foreign fighters were extradited in the first nine months of 2017. Despite more effective border control and constant and widespread monitoring of national territory, there could be an uptick in Islamic State military infiltration attempts from Syria and there could be an increase of attacks on Turkish soil in order to make up for the reputational damage. Nevertheless, it is currently hard to imagine an attack comparing to those launched between 2015 and 2016.