Turkey Is Not the Answer to the War in Syria 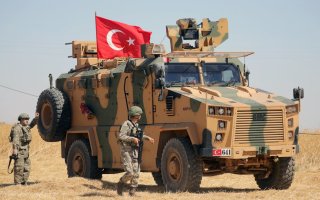 The world’s eyes, fixed on Syria only a few years ago, now hardly linger there as the world's focus on Ukraine and China grows. But Syria, Russia’s training ground for Ukraine, is now threatened by a new outburst of violence, one with implications beyond its own borders. For America, this crisis is an opportunity to regain lost leverage in the Middle East.

American troops are still in Syria. So are Russian troops. And so are Turkish troops. All three zones of influence share a common border. American and Russian troops patrol different parts of the territory controlled by the Syrian Democratic Forces, the militia that defeated ISIS in Syria with the aid of American airpower, while Turkey controls parts of the northern border, its troops propping up Islamist proxies.

We reached this precarious situation through American error. America has partnered with the Syrian Democratic Forces since 2014 to defeat ISIS. The SDF’s predecessor organization, a Syrian Kurdish militia called the YPG, caught Washington’s attention with a courageous stand at the border town of Kobane. Unlike the Iraqi army and the Iraqi Kurdish Peshmerga, at that time generally on the run, the YPG and its Arab allies stood and fought. American airstrikes turned what would have been a last stand into a great victory over ISIS, one that eliminated much of its heavy armor along with thousands of its fighters. Though the SDF proved a brilliant partner over the following years, even building a functioning multi-ethnic and semi-democratic statelet as ISIS was destroyed, it nevertheless came with one caveat: Turkish enmity.

The YPG arose from the PKK, a Kurdish insurgent group that Turkey considers a terrorist organization. Turkey grew worried about the YPG’s influence on its southern border—even though the SDF had become majority-Arab—and launched interventions into Syria in 2016 and 2018, first to seize a stretch of land then held by ISIS in order to stop the SDF’s march along the border, and then to seize the SDF’s western outpost of Afrin. But Turkey couldn’t proceed against the SDF’s core territory because of America’s presence there. America promised to protect the SDF in exchange for concessions to Turkey; the SDF agreed to demilitarize the border and allow joint U.S.-Turkish patrols.

Swayed, however, both by Turkish president Recep Tayyip Erdogan’s pleas and his own strategically vague desire to lessen America’s foreign footprint, President Donald Trump chose to withdraw American forces from most of the SDF’s territory in October 2019, keeping only a residual force in the oil-rich Deir ez-Zor province to, in his words, “keep the oil.” Turkey immediately launched an invasion from the north, forcing the SDF to invite Russian troops to patrol those areas vacated by the United States. Turkey, unwilling to attack Russia, limited its invasion to a modest stretch between the border towns of Ras al-Ayn and Tel Abyad.

This awkward arrangement persists today: American forces patrol part of the SDF’s territory, Turkish proxies hold that border strip, and Russia patrols the rest. But Russia has recently been forced to withdraw some troops from Syria due to its war in Ukraine, most notably resulting in fewer sorties over Syria. It’s not clear whether Russia still has the will or the ability to defend the SDF, so the timing is perfect for Turkey to strike again.

Small wonder, then, that Erdogan has just announced publicly his intention to do so, pledging to “clear terrorists” from Manbij and Tel Rifat, two SDF-held cities. Manbij is quite large; if the SDF resists, any urban battle will cause numerous casualties, including civilian ones.

Does Erdogan think Russia will simply withdraw, permitting him to advance? Possibly. Russian and American forces never “protected” the SDF in the full sense, as their numbers were simply too low to resist a Turkish advance. From a military standpoint, Erdogan could have destroyed both foreign contingents many years ago. But, of course, he does not want to attack either Russia or America for fear of the consequences. America’s small presence and the later Russian presence deter not through denial but through the threat of punishment. They force Erdogan into the position of being the aggressor, meaning he cannot afford to strike first.

But it is not clear that Russia retains the ability to punish Turkey, especially given Putin’s ongoing display of military weakness. On the contrary, Turkey holds all the cards. Turkey controls access to the Bosporus, and so can bottle up the Black Sea Fleet—already officially denied passage into the Mediterranean and thus unable to reach Russia’s Syrian base in Tartous—or stop Russian cargo ships. Turkey’s Bayraktar drones have proven very effective in Ukraine, and deliveries continue. Nor is Russia’s incentive to stay in Manbij or Tel Rifaat very strong. Russia wants to shore up Assad, of course, but the SDF is a long-term threat to his power. Assad and Russia may calculate that new SDF losses are worth a small territorial cost—or perhaps even a large territorial cost. Assad certainly wants Deir ez-Zor’s oil wells (a Syrian force, backed by Russian contractors, infamously tried to attack them in 2018 before being cut to pieces by American troops and airstrikes). But northern Syria was never a very prosperous region. At any rate, Erdogan may well calculate that Russia will simply withdraw, and he can easily offer carrots to sweeten the deal.

However, a new Turkish invasion will hurt not only the Syrian people and the SDF but also American strategic interests. America’s withdrawal was a great mistake. First, it was a moral error to betray the SDF, one that hurt America’s standing with its allies. It’s hard not to view the Syria withdrawal as a precursor to the botched withdrawal from Afghanistan. But the presence in Syria was both cheap and valuable, offering useful leverage against Turkey, Russia, Assad, and Iran while preventing an ISIS resurgence. We gave up that leverage for nothing in return.

The difficulty lies in reversing America’s previous mistakes. In Syria, as in many cases of great-power rivalry, the key was being there first—deterring other nations with America’s mere presence. But just as Turkey, Assad, or Russia couldn’t attack an area patrolled by U.S. troops, America can’t simply evict Russian or Turkish troops. Nor has any obvious diplomatic resolution presented itself.

If Russia withdraws, why let Turkey fill the vacuum, especially if any incursion involves backdoor concessions to Putin? Instead, America can and should resume its former role as protector of the SDF’s entire territory. All the United States would need to do is announce publicly that American troops will resume patrols in any areas vacated by Russian forces. To make that announcement credible, the United States should reinforce its Syrian presence with more heavy armor and additional troops (at the moment we have several hundred troops with some infantry fighting vehicles but no tanks). Doing so would leave Russia with a difficult choice: keep troops needed in Ukraine patrolling an area of modest strategic value or withdraw and risk a sudden resurgence of American influence and SDF power.

Most likely Russia will just stay in place, but that’s not a bad thing. It’s far better for the United States to have an intact SDF as a continued threat to Assad’s power than a Turkish invasion that will, in the end, mostly benefit Assad and Iran and further erode the American partnership with the SDF. Guaranteeing protection in case of a Russian withdrawal also reduces Assad and Putin’s leverage over the SDF. The SDF has always had a strained relationship with Assad, who repressed Kurds before the civil war, and Russia, who initially promised to protect Afrin from Turkish attacks, but then left. Russia maintains leverage because it can threaten to withdraw at any time, allowing Turkey to invade, and the hope is that this threat permits Assad to gradually increase his control over SDF-held regions. But if the SDF knows that America, not Turkey, will fill the power vacuum left by a Russian withdrawal, it has little incentive to listen to Assad’s demands or permit his government to meddle in local governance bodies. Actually, in that case, the SDF will want Russia and Assad to leave, all the more so because the United States recently agreed to exempt SDF-held territory from some of the sanctions levied on Assad’s government. This exemption will allow foreign investment (except in the oil sector), but foreign investors are much more likely to come to an area protected by the United States.

America can heighten the effect by improving the quality of its weapons shipments to the SDF. The United States has been supplying the SDF since 2014, but most shipments are limited to small arms, vehicles, and the like. While sending weapons is hard because they’re so badly needed in Ukraine, Washington ought to create a long-term plan to train and arm the SDF with modern anti-tank systems, as well as man-portable air-defense systems. Better weapons will make any Turkish advance far more costly. They will also reduce Assad’s ability to attack the SDF directly, even with Russian support, forcing him to rely on the threat of a Russian withdrawal and consequent Turkish advance to exercise influence. However, that can also be prevented by an American promise to occupy the void before Turkey does.