Turkey Is Optimistic about President Trump 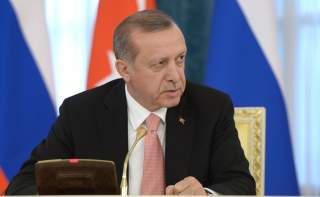 Recep Tayyip Erdoğan’s government has emerged as one of the cheerleaders of the results of the U.S. election. This was not unexpected, given the extent of anti-Clinton sentiment in the pro-government Turkish press, which unprecedentedly waived its neutrality before an American election. In addition to the Gülen movement’s financial support for PACs aligned with Hillary Clinton, hints of a Clintonian Syria policy that would boost the Democratic Union Party (PYD) at Turkey’s expense proved to be enough to horrify Ankara about the prospects of a Democratic administration. These complaints came on top of Ankara’s divergence with the Obama administration, which not only wobbled on supporting the region’s goals of “democratic transition,” particularly in its second term, but also appeared ready to yield to the possibility of a military takeover by the Gülenists a few months back.

Turkey is currently operating under a siege mentality. The country is involved in the Syrian and Iraqi military campaigns, while at home it is waging a multifront fight against the Kurdistan Workers’ Party (PKK), Islamic State (ISIS) and, to a lesser extent, leftist organizations such as the Revolutionary People’s Liberation Front (DHKP-C). Yet nothing has shaken the whole state apparatus as much as the asymmetrical fight against the Gülenists, who were known to have penetrated all state and civil organs under a four-decade effort to monopolize power in accordance with their Messianic goals to establish a Khomeini-style political regime in Turkey. The “purification” process following the failed coup attempt, involving massive purges within the state, whistleblowing and potential criminal charges for association with the Gülenists, has not only strained the bureaucracy but also brought social costs, with growing mistrust within the conservative backbone of society. The Gülenists failed in their overall goal of overthrowing the elected government, but they have not ended lobbying activities in the United States or the other 160 countries in which they operate to further erode President Erdoğan’s international reputation. Overall, a cloud of uncertainty and unpredictability hangs over Turkey.

Beyond these internal dynamics of upheaval, Turkish foreign relations are also in jeopardy. First, Ankara has largely severed its institutional links with the Western political and security community, even if it has never gone beyond security-only engagement. At present, Turkey is still a NATO member; however, nobody can be assured of a sustained transatlantic commitment to Turkish security, given that Turkey is under attack by a number of terrorist organizations. Second, Turkey’s regional security perceptions are on high alert, given the ongoing geostrategic competition in Syria and Iraq. Erdoğan has prioritized removing the threat of PKK enlargement on the Turkish-Syrian border, but also keeps an eye on Shia expansionism. The future of the fight against ISIS is still unknown, and Ankara is apprehensive about the PKK and Shia militias filling the void, particularly in Mosul and Raqqa. Thus, Erdoğan vehemently seeks American and, to an extent, Russian attention, to be seen as an equal partner in redesigning the region. Such a redesign did not materialize during the Obama era.

Against this background, Erdoğan expects Trump to be aligned with his government in three crucial ways. First, Trump is expected be open to extraditing the leader of the Gülen movement, Fethullah Gülen, who resides in Pennsylvania. One of the key members of Trump’s transition team slated for the role of National Security Advisor, Lt. Gen. Mike Flynn, published an article on the day of the election that was in full accord with Erdoğan’s expectations about Gülen.

Second, Erdoğan seeks a partnership with the United States in Syria and possibly in Iraq to isolate Assad and the PYD, as well as Iran’s rising clout. This would be in tune with General Flynn’s implicit calculus to roll back “radical Islam,” including ISIS and Iran-led militias, in return for backing Turkish geostrategic goals. In the same Election Day article, Flynn underscored, “Turkey is really our strongest ally against the Islamic State in Iraq and Syria (ISIS).” This would also imply a reinvigoration of the U.S.-Turkish partnership with Israel, the pro-Western Arab monarchies—Saudi Arabia, Jordan and the Gulf sheikhdoms—and arguably Egypt.

Third, more broadly, Turkey would feel comfortable seeing a U.S.-Russian accord on regional issues with a balanced approach that would reassure Turkish interests. Ankara recently found rapprochement with Moscow and seeks to play down its discomfort with Russian interventionism, from Crimea to Syria. If Trump could soothe relations with Putin, then Erdoğan would seek a common denominator to bring back peace and stability to its neighborhood. In any case, Turkey is dependent on the United States’ (and, more broadly, NATO’s) commitment to regional and global security to attain its foreign-policy goals. Therefore, there are still great unknowns about what the new U.S. administration is considering in place of the global security architecture, given Trump’s qualms about the current structure of the transatlantic organization.

Despite high expectations, there are potential divergences on the horizon with the upcoming U.S. administration. The Trump administration might be less vocal about “common values” and less critical of post-coup-attempt measures in Turkey. However, still it would require more compliance with broader U.S. foreign-policy goals on the Turkish side. The Iranian question was put aside by Obama’s dubious but effective multilateral diplomacy. A reopening of Pandora’s box would discomfort Turkey in financial and geostrategic terms. While Turkey is apprehensive about Iran’s destabilizing role, it also acknowledges Iran’s importance in putting things back together. A return to confrontation with Iran would remove any remaining potential of having a leading regional Shia power join in efforts to stabilize the region. This could open up further risks of instability, from Lebanon to Yemen and Afghanistan. Thus, Turkey needs to seek an optimal formula with Washington to turn Iran into a responsible regional actor, which entails acknowledgement of Iranian interests.

The direction of a Trump-Putin accord might also hurt Turkish interests if they both chose to agree on a sphere-of-influence arrangement to reinstitute security in Europe and the MENA region. Although this remains a distant possibility, as Europe is vital for both and Russia’s presence in Syria is a historical anomaly, the exclusion of Turkish interests in Syria, Iraq and, to a lesser extent, in the Balkans and Eastern Mediterranean would induce a strong response from the Turkish establishment.

Hints of a new U.S. approach to the “war on terror” and relations with the Islamic world also contain pitfalls for Erdoğan. Trump’s commitment to fight back “radical Islam” might go to the extreme of confronting political Islam, which would in that case collide with the Turkish government’s support for the integration of Islamist groups into the region’s future regimes. On that note, a crucial aspect of the West’s relationship with Islam in the Trump era will be the handling of Muslim minorities in Europe and the United States. The Western populist wave has turned xenophobic and anti-Muslim, which threatens not only the five million Muslim Turks in Europe, as seen in the selectively anti-Turkish Brexit campaign, but also carries a risk of undermining Turkish-Western institutional links—even in NATO.

Last but not least, with emerging problems for Turkish macroeconomic indicators, Turkey expects a more inclusive trade regime with the United States and further U.S. investments to prop up its development goals. If Trump keeps his election campaign promise to focus on “America first,” then Turkey would feel the heat of lessening trade and investment as a developing economy.

Overall, Turkey is ready to cooperate with the incoming Trump administration on common geostrategic goals. The question is to what extent the new president would integrate Turkish interests and concerns in his regional and global designs.