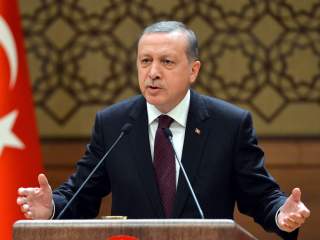 Domestic security has been headline news for Turkey in 2016. Successive terrorist attacks in Ankara and Istanbul have increased in intensity—an indication that Turkey’s parallel wars, against Kurdish separatist groups in the southeast of the country and against Islamic State in Syria, are far from being under control.

For President Recep Tayyip Erdoğan, the rising death toll and economic damage of these attacks represent both a challenge and an opportunity. Erdoğan and his former party, the Justice and Development Party (AKP), successfully regained a majority in the Turkish parliament in November 2015, in part by running a campaign that only the AKP could deliver security and development for the Turkish people. Every bombing in the major population centers of Turkey contradicts this message, but it also contributes to Erdoğan’s wider political ambitions.

Although elected president in 2014 with almost 52 percent of the vote, Erdoğan is openly dissatisfied with the constitutional checks to his authority that the Turkish political system outlines. He is pushing for a change in the constitution that would shift the political executive away from parliament and into his hands. Erdoğan already exercises an unprecedented amount of control over decisionmaking in Turkey, both legally and through an extensive and opaque network of informal mechanisms and relationships.

If You Don’t Like What They’re Saying, Change the Conversation

There are, however, obstacles to Erdoğan’s ambition. Turkey has undergone a definite shift towards authoritarianism over the last year, but real political opposition still exists to check Erdoğan’s ambitions, if not quite challenge his position. As his administration has been dogged by successive allegations of corruption and nepotism, Turkey’s opposition parties have grown concerned that Erdoğan would exploit any constitutional shift towards an executive presidency. They fear he would use the position to prosecute as many of his perceived opponents as he felt necessary, and secure immunity for himself and his family once his term expires.

If speculation is to be believed, and Erdoğan intends to start his campaign for constitutional change before the summer, he needs to bring outside support to the AKP and sufficiently discredit his most determined opponents. Accordingly, Erdoğan has decided to securitize the political environment in the hope that a polarized opposition will bring undecided voters to his cause.

This has taken the form of attacks on political parties like the Republican People’s Party (CHP), the Peoples’ Democratic Party (HDP) and alleged adherents of the Gülen movement, an moderate Islamist group that Erdoğan has been feuding with ever since its followers in the police and judiciary allegedly orchestrated a corruption investigation into his family and allies in 2013.

On April 8, the Twitter account known as “Fuat Avni” posted a leak of proposals by Erdoğan to accuse the CHP of complicity and support of the Revolutionary People’s Liberation Party/Front (DHKP/C), a Marxist-Leninist political group that has been designated as terrorist by Turkey, the United States and the EU.

The Fuat Avni account claims to be a whistleblower operating from within the government, and has reliably predicted key government crackdowns since it went active in 2014. This was the same day that Erdoğan publicly derided Kemal Kılıçdaroğlu, the leader of the CHP, as unfit for his position, saying that he did not recognize him as such.

The leak, if true, suggests that Turkey’s National Intelligence Organization (MİT) will use moles within the DHKP/C to implicate the CHP. Aside from an attack on a police post on March 30, the DHKP/C’s most high-profile assault was the murder of prosecutor Mehmet Selim Kiraz after a standoff with police.

Targeting supposed representatives of the Turkish “deep state” would predictably put the DHKP/C in direct confrontation with the CHP, whose members are vocal upholders of the Atatürk legacy. Despite pro-Erdoğan newspapers promoting the idea of complicity and ties between the DHKP/C and CHP, evidence supporting these claims has not been forthcoming.

On April 9, Kılıçdaroğlu reiterated the stance of the party by refusing to accept Erdoğan’s current proposals for constitutional change. The CHP are the largest opposition party in parliament and the main focus of Western-oriented secular-liberal ideology in Turkey, although the party has not won a plurality of seats in parliament since 1977; its core constituency is in Turkey’s west, including its European section. As a voter base, the CHP’s supporters find the increasingly intrusive Islamism of the AKP anathema and are unlikely to support any move that strengthens Erdoğan’s hand.

Targeting the CHP as terrorist supporters is a crude move on behalf of the president and his allies, but it is not without strategic merit. Doing so would represent the culmination of a broader trend that has come to characterize Erdoğan’s approach to political discourse.

On March 14, 2016, Erdoğan publicly called for the Turkish definition of a terrorist to be broadened to include supporters of terrorism, equally guilty and subject to punishment. It was heavily implied that this amendment would be used to implicate political and business figures. Why would Erdoğan seek to smear the opposition in such a way? As the country faces multiple internal threats, it seems counterproductive to actively seek to alienate a well-established and institutionalized faction of domestic politics.

The answer lies in Erdoğan’s dream of an executive presidential system, and the demographics required for its implementation. Currently, the AKP has 317 seats in the 550-seat parliament, leaving it short of the 330 votes that would be needed to take the proposal for a constitutional referendum to a public vote.

Erdoğan is making a gamble. He knows that the chances of converting CHP or HDP members to support his ambitions are extremely unlikely, particularly in the polarized domestic environment he has created over the past eighteen months. His aim must lie with the only party that has so far largely escaped his excoriation, the far-right Nationalist Movement Party (MHP), led by Devlet Bahçeli.

Although separated by political ideologies, both the AKP and MHP share a voter base among conservative nationalist Turks, and the AKP succeeded in poaching Tuğrul Türkeş, a high-profile member of the party, after the June 2015 elections.

The MHP’s leadership is currently in crisis; members have signalled dissatisfaction with Bahçeli and applied for a Turkish court ruling to demand an extraordinary party congress, which was granted on April 8. In turn, Bahçeli has accused his challengers of belonging to the “parallel state” aspects of the Gülen movement—conforming to President Erdoğan’s narrative of division.

If the MHP is conflicted by internecine strife, Erdoğan will look to offer its members stability in supporting his agenda, particularly if he can continue to push a narrative of domestic terror threats to the Turkish state from Marxist and Kurdish elements—sacrilege to the MHP. If he can secure enough MHP deputies to support his campaign over the 330-seat threshold, there is every chance that a subsequent referendum would succeed.

This approach, of manipulating the media and legal mechanisms of the state, was developed last year in the run-up to November’s parliamentary “rerun” elections. The AKP had suffered an unexpected public rebuke in the June election last year, when it lost its majority for the first time. Key seat losses came from the participation of the HDP.

Under the charismatic joint leadership of Selahattin Demirtaş and Figen Yüksekdağ, the party, running on a liberal, pro-Kurdish program, gained an unprecedented 13 percent of the vote and appeared to present a permanent check to the president’s plan of using an unchallenged AKP majority to force through his constitutional amendment.

The response from Erdoğan and the AKP was to essentially shift discussion of the HDP away from political considerations and into security concerns; aware that Turkish voters are sensitive to the idea of Kurdish terrorist attacks, the AKP shifted to a narrative that portrayed the HDP and the terrorist Kurdish Workers’ Party (PKK) as one and the same.

This was facilitated by the breakdown, in July 2015, of the nascent peace process between the Turkish government and the PKK. Erdoğan accused the HDP leadership of terrorist sympathies in July, and in response, Demirtaş openly replied that the eighty HDP lawmakers would voluntarily lift their parliamentary immunity if required in a show of good faith. By January 2016, Erdoğan had maintained the HDP terror narrative long enough to claim that there was no Kurdish problem in Turkey, only a terror problem.

The End of Opposition?

Erdoğan’s position as president is strong. He is the unquestioned authority behind the AKP and has ensured that the party is represented by parliamentary deputies largely beholden to his patronage. If he plans to mobilize his considerable resources in a campaign to amend the constitution, there is little cohesive political opposition. As Erdoğan sees it, an executive Turkish presidency will be decided by eliminating the Turkish opposition.

However, he cannot be complacent. Turkey’s economy is suffering from high inflation, and there is a strong suspicion that the Central Bank is under pressure from the president not to increase interest rates in response. Unemployment reached a ten-month high in March, and the continued pressures of a diplomatic feud with Russia, support for Syrian refugees and the collapse of the Turkish tourism industry in response to terrorist attacks will mar the attempts of Erdoğan to portray AKP governance as economically competent.