Turkey Prepares for a Pompeo Problem 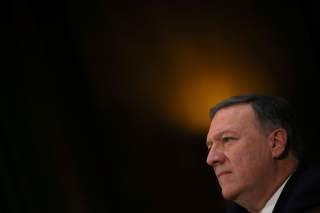 The tension between Turkey and the United States appeared to have diminished after the outgoing Secretary Rex Tillerson’s visit to Turkey in February. The two countries had been at loggerheads over a number of issues, particularly U.S. support for the Syrian Kurdish YPG militia, seen as terrorists by Turkey. The tension reached new heights after Turkey launched a military incursion into the northwestern Syrian Kurdish enclave of Afrin. The United States voiced concern that Turkey’s operation jeopardizes the fight against the Islamic State as the YPG is withdrawing forces from the fight to help the Kurdish forces in Afrin against Turkey. Turkey has repeatedly warned that it will also drive the YPG militia from Manbij, east of Afrin, where there are around two thousand U.S. military personnel. Ankara has called on Washington to pull back from the town. Despite Turkey’s warnings, the U.S. Central Command chief General Joseph Votel said the United States has no plans to withdraw troops stationed near the town. The once unthinkable prospect of a direct clash between the two NATO allies became alarmingly real.

Tillerson’s visit to Ankara calmed tensions down. After the meeting, Tillerson and his Turkish counterpart announced that they had “reached an understanding to normalize the relations” and set up a mechanism to address outstanding issues.

The sacking of Tillerson is likely to complicate efforts to resolve the crisis with Turkey. The outgoing U.S. secretary has led efforts to ease tensions and is known for favoring coopting Turkey over confronting. Mike Pompeo, President Donald Trump’s pick for secretary of state, on the other hand, has a hard-line approach on foreign policy and is not a big fan of Turkey’s President Recep Tayyip Erdogan. In a tweet posted the day after the failed coup in Turkey in 2016, Pompeo labeled Erdogan’s Turkey a totalitarian Islamist dictatorship. Ankara is concerned that Pompeo, with his military background, might support Pentagon’s policy of closer engagement with the YPG. The U.S. Central Command, which oversees coalition operations in Syria and Iraq, has worked very closely with the YPG and is unwilling to severe ties with a group that it thinks is the most effective fighting force. Pompeo wants the United States to play a more assertive role in Syria. If he chooses to take the CENTCOM’s advice to keep working closely with the YPG to achieve that goal, Turkey-U.S. relations will remain strained.

Pompeo’s track record as an Iran hard-liner could become another complication in Ankara-Washington ties. Pompeo agrees with Trump that the 2015 nuclear deal is a disaster. Even after the accord was signed, Pompeo warned European leaders against investing in Iran. Turkey, on the other hand, has become one of the principal beneficiaries of the deal. Turkey and Iran are close trading partners. Turkish officials repeatedly said that Iran’s nuclear program was peaceful and opposed unilateral sanctions. A recent court case in Manhattan in which a Turkish banker working for a state-owned bank was convicted of taking part in a billion-dollar scheme to evade American sanctions against Iran highlighted the diverging views. A U.S. decision not to extend U.S. sanctions relief on Iran will put Turkey in a difficult spot and further complicate Turkey-U.S. relations.

Turkey and President Trump found themselves on opposing front in the Qatar crisis that erupted after Saudi Arabia, Bahrain, the United Arab Emirates, and Egypt cut ties and blockaded Qatar in June, accusing it of supporting “terrorism” and fostering ties with their rival Iran. The Turkish president has supported Doha while President Trump has accused the Gulf country of sponsoring terrorism at the highest levels. Tillerson had a moderating effect on Trump’s stance and steered U.S. policy toward a negotiated settlement of the conflict. If Pompeo reinforces Trump’s hardline instincts, Turkey’s Qatar policy could become more a big problem for Washington.

All the issues haunting Turkey-U.S. relations aside, Pompeo will find a NATO partner that is at odds not only with the West but also with the U.S. allies in the region. Ties between Turkey and Egypt have been frosty since the toppling of the Muslim Brotherhood-based government of President Mohammed Morsi. The two countries withdrew ambassadors and have kept the diplomatic relations at charges d'affaires level since. Relations suffered another blow after the Egyptian media affiliated with the regime celebrated the attempt to unseat President Erdogan in July 2016. The two countries remain skeptical of each other’s moves in the region.

Turkey-Saudi ties are tense as well over Turkey’s support for the Muslim Brotherhood, Ankara’s close ties to Iran and Erdogan’s support for Qatar. In a recent press statement, Saudi Arabia’s Crown Prince Mohammed bin Salman said that Turkey belongs to an “axis of evil” in the Middle East, along with Iran and “extremist religious groups.” For reasons similar to those that strained Turkey-Saudi ties, the United Arab Emirates has been at loggerheads with Turkey. Turkish and UAE officials have been trading accusations. The UAE foreign minister Abdullah bin Zayed al-Nahyan took to Twitter in December to accuse an Ottoman commander of stealing Islamic manuscripts during the siege of Medina in 1916. Erdogan’s response was equally harsh.

In a closed-door meeting with U.S. officials in January, Jordan’s King Abdullah II apparently accused Turkish government of enabling the infiltration of Islamist terrorists into Europe and encouraging a “radical Islamic solution” to the crises in the Middle East. Turkey-Iraq relations are uneasy as well. The two have found common ground in opposing the Kurdistan Regional Government’s independence referendum but sharp differences remain between Ankara and Baghdad. There is a deep sense of distrust toward Turkey in Baghdad. Suggestions in pro-government circles that Turkey could stake a claim to Kirkuk and Mosul, former Ottoman lands, is deeply disturbing to the Iraqi government.

The Trump administration’s recognition of Jerusalem as Israel’s capital has exacerbated existing tensions between Turkey and Israel. After the move, President Erdogan threatened to cut ties with Israel and called it a “terrorist” and “child-murderer” state. Israeli prime minister Benjamin Netanyahu fired back that Erdogan is responsible for the bombing of Kurdish villages.

The outgoing secretary Tillerson had the trust of his Turkish counterpart and led the efforts to engage Turkey. Whether the new boss at the State Department will follow his predecessor’s route remains to be seen. But one thing is clear: even if Pompeo decides to coopt Ankara, it will be an uphill battle.

Image: Representative Mike Pompeo (R-KS) arrives to testify before a Senate Intelligence hearing on his nomination of to be become director of the CIA at Capitol Hill in Washington, U.S., January 12, 2017. REUTERS/Carlos Barria