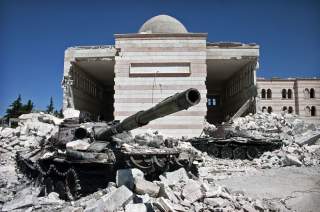 In recent years, Turkey and Qatar have found much common ground on a host of foreign policy issues. Both Ankara and Doha have sponsored a variety of Sunni Islamist groups, seen as conduits for their geopolitical influence in the fluid Middle East. However, both countries have experienced setbacks from their engagement in some of the region’s conflicts, most notably in Syria.

Last month, the Turkish and Qatari representatives left the Vienna talks on Syria maintaining their conviction that Bashar al-Assad must relinquish power as a precondition for peace. Although Turkey’s shared border with Syria and Qatar’s deep pockets provide the two nations much potential to prolong insurgencies against the Syrian Arab Army (SAA) and its allies, it appears unrealistic to imagine Ankara and Doha achieving their objective of toppling the Syrian regime through their current strategies, especially in light of Russia’s military intervention in the country.

Throughout the 2000s, both Turkey and Qatar pursued efforts to expand strategic clout at a time when Washington’s relative power was declining in the aftermath of the invasion and occupation of Iraq. Since taking power in 2002, the AK Party’s leader ramped up Turkey’s role and image on the Arab street through the ideological lure of the party’s brand of “democratic Islamism,” as well as through trade and investment opportunities that the Turks offered the Arabs.

Recep Tayyip Erdoğan’s anti-Israel rhetoric in the aftermath of Operation Cast Lead (2008–2009) and the Mavi Marmara incident of May 2010 improved the Turkish leader’s popularity in the region in the years leading up to the Arab Awakening. Similarly, Qatar relied on its ownership of Al Jazeera and its reputation as a “fair broker” in regional conflicts to enhance the nation’s own soft-power influence far beyond the Gulf. Indeed, Al Jazeera’s coverage of the U.S.-led war against Iraq in 2003, its focus on the Palestinians’ plight and its role as a platform for Arab regime critics to voice their opinions sat well with many Arabs, whose previous media selections were heavily censored and slanted in favor of the ruling regimes.

However, the Syrian crisis and 2011’s other Arab uprisings and “revolutions” elicited reactions from Turkey and Qatar that severely damaged their reputations. By sponsoring Sunni Islamist causes in Egypt, Gaza, Libya, Syria and Tunisia, Ankara and Doha came under harsh condemnation from other powers in the region. Many quickly accused Turkey and Qatar of stoking sectarian unrest and promoting extremism.

In Egypt, both states opposed the rise of Abdel Fattah el-Sisi in July 2013. In Libya, Ankara and Doha both supported the Islamist-dominated “Libya Dawn Coalition”. Both Turkey and Qatar prevented Hamas from becoming internationally isolated through their shared support for the Palestinian group, which the U.S. State Department and EU designate a “terrorist organization”. Qatar’s willingness to break political ranks with its fellow Arab states was underscored in August, when Doha strongly distanced itself from an Arab League resolution condemning Turkey’s bombing of Kurdistan Workers’ Party (PKK) targets in northern Iraq. Qatar expressed its “full solidarity” with Turkey as it seeks “to protect its borders and preservation of its security and stability.”

Yet it is in Syria where both countries have invested the most in their common cause. Despite their efforts to topple Assad, the regime’s resilience has highlighted the limitations of Turkey and Qatar’s means to project power beyond their borders. In 2011, the Turks and Qataris bet on Assad following the fate of Mubarak, Ben Ali and Qaddafi, and sought to be on the “right side of history.” Their miscalculations about the regime’s future were rooted in a misread of domestic issues within Syria and the dynamics of the regional forces that would ultimately come to have a profound impact on the course of events.

Unquestionably, the regime’s resilience is partially due to its brutality, but it is imperative to note that Assad has a wide network of support in Syria from groups who share common fears of the takfiris’ agenda. Given that the two most powerful factions fighting the Syrian regime are ISIS and Jabhat al-Nusra—both takfiri groups—many Syrians see the secular Ba’athist regime as the only realistic bulwark against Islamist extremism in Syria. Many analysts have largely attributed the strength of hardline jihadist forces not only in Syria, but also in Libya, to Ankara and Doha’s sponsorship of Islamist networks across the region, associating Turkey and Qatar’s influence with sectarianism and extremism.

Ankara and Doha also underestimated the extent to which Assad’s foreign backers would come to his side. Indeed, Ankara and Doha’s roles in the conflict have been dwarfed by Russia, Iran and Hezbollah’s military intervention against the regime’s enemies. Despite the efforts of Ankara and Doha to topple Assad, the SAA remains by the far most powerful force on the ground and the regime is not about to disappear. Syria’s most important strategic ally in the Middle East is Iran, which has a played a pivotal role as a military, political and economic supporter of the Assad regime throughout this conflict. That Washington and Moscow invited Tehran to join last month’s Vienna talks on Syria marked a reversal in U.S. foreign policy, given that Washington previously refused to talk directly to Iranian officials about the Syrian crisis. In the larger picture, Iran’s participation in the talks underscored not only Tehran’s important role in the Syrian conflict but that yet another ally of Assad was brought to the negotiating table.

It is important to note that despite the ideological dimensions of Turkey and Qatar’s role as sponsors of the anti-Assad rebellion, the geopolitics of natural gas have factored into Ankara and Doha’s alignment vis-à-vis Syria. In 2009, Assad rejected a Qatari offer to run a pipeline from the Gulf emirate’s North Field (which is contiguous with the South Pars field, owned by Iran) to Turkey and beyond via Saudi Arabia, Jordan and Syria. As a strategic ally of Moscow, Damascus’ refusal to sign the Qatari proposal was said to be driven in part by Syria’s interest in protecting Russia’s position as the EU’s number top natural gas supplier (which has tended to be overlooked as a factor in the analyses of Russia’s role in the Syrian crisis).

To the ire of officials in Doha, in 2010 Assad began negotiations for the alternative $10 billion “Islamic pipeline” with Tehran, with the objective of transiting natural gas to Syria’s Mediterranean coast via Iran and Iraq. Sixteen months after the Syrian crisis erupted, Assad signed the Memorandum of Understanding (MoU) with Iran. Syria has often been written off from a geostrategic perspective because it does not have much oil and gas compared to other Middle Eastern states. However, the country’s potential as a regional energy corridor has itself been a significant factor influencing the ongoing Syrian conflict—one that has received little attention in Western reporting about the conflict.

Since Saudi Arabia’s King Salman inherited the throne in January, Riyadh has softened its opposition to Sunni Islamist groups. In contrast to his predecessor, King Abdullah, who aggressively countered these groups both domestically and regionally, King Salman has sought to pursue a strategy of uniting the Sunni world against Iranian influence in the region, which he views as a graver threat than grassroots Sunni Islamist movements which represent social justice causes and embrace democratic institutions. In practice, this has entailed deeper collaboration with Turkey and Qatar in Syria, as well as diplomatic overtures to Muslim Brotherhood branches in Egypt, Gaza and Yemen.

The territorial defeats that the SAA endured earlier this year are believed to be largely attributable to Riyadh, Ankara and Doha’s stepped-up support for the “Army of Conquest” (a coalition of militias dominated by Jabhat al-Nusra and Ahrar al-Sham fighters). By pursuing deeper cooperation with Turkey and Qatar in Syria, Saudi Arabia has created a degree of tension with its two strategic allies: the UAE and Egypt, which both staunchly oppose nearly all forms of political Islam in the region. Although Egypt, Jordan and the UAE have not openly sided with Assad, their reactions to Moscow’s military campaign in Syria are indicative of their view of Russia as an important player in the regional struggle against terrorism, as well as the greater Middle East’s shifting geopolitical order, despite their Sunni Arab identities and alliances with Washington.

Although the full implications of Moscow’s strikes against Assad’s enemies in Syria have yet to be realized, Russia’s military campaign has enabled the SAA to reconquer territory in the provinces of Homs, Hama and Aleppo. As Saudi Arabia, Turkey and Qatar remain committed to their position that any transition in Syria cannot include Assad, and all three governments have condemned Moscow's backing of the Assad regime, it remains to be seen what Riyadh, Ankara and Doha may do to change facts on the ground in Syria.

Last year Ankara and Doha signed an agreement permitting the joint deployment of troops in either country. The return of Turkish troops to the Gulf emirate 100 years after Ottoman forces withdrew from modern-day Qatar is a symbolic development. It is a huge leap, however, to imagine that the next logical step in their evolving military cooperation is a joint force in Syria. In fact, last month Qatar's Foreign Minister Khalid al-Attiyah ruled out the possibility of deploying Qatari forces to Syria, instead vowing to continue financially sponsoring groups fighting the Ba’athist regime. Similarly, with Riyadh bogged down in Yemen, it is hard to imagine that Saudi Arabia will be committing ground forces to Syria.