Turkey Is on the Front Lines against ISIS's Bomber Drones 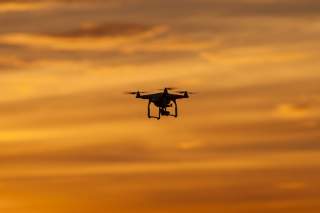 Unmanned aerial vehicles (UAV)—better known as drones—are great things. Their commercially available versions are really fun to play with, they shoot beautiful aerial videos, they help with environmental protection and scientific research, and they even deliver packages.

On 27 September, a ISIS-controlled drone dropped a bomb on Turkish soldiers in Syria’s Wuquf region, south of al-Rai, wounding three—one critically. The soldiers were part of the TSK-led “Operation Euphrates Shield,” which aims to bolster the Free Syrian Army against ISIS and the Syrian Kurdish Democratic Unity Party (PYD), an ally of Turkey’s bête noire, the Kurdistan Workers Party (PKK).

That ISIS used a drone to attack the Turkish military in Syria was not surprising; commercial drones have made their mark on military conflicts for some time. For example, the PKK used commercial drones for reconnaissance purposes in urban environments against Turkish security forces during the government’s anti-PKK operations in southeast Turkey in 2015–16.

Earlier in 2014–15, during the most intense phase of the fighting in Ukraine, commercial drones helped with aerial reconnaissance, finding targets and directing fire. And just last August, the Lebanese Shia group Hezbollah, which is fighting on the Assad regime’s side in Syria, used a weaponized commercial drone against antiregime forces outside Aleppo.

It is clear that, with the right explosive and drone (some of which cost as little as a few hundred dollars), militant groups could hurt opposing forces, ruin morale and damage equipment worth millions of dollars.

Is there an effective way to counter these perfect poor man’s spies and antiarmor/antipersonnel weapon? The United States, Turkey’s NATO ally, thinks so.

For the past few years, the U.S. Army has been conducting research into fielding defensive measures against consumer drones. According to Military.com’s Matthew Cox, this has been no easy task. Conventional small arms—be they shotguns or high-powered machine guns—could not shoot down explosive-laden drones. Not only are the small, fast-moving drones hard to hit, but they are also durable, and detecting them before they get too close is a serious challenge.

The U.S. military’s return to Iraq in 2014, along with threats from commercial drones in asymmetric warfare, has given urgency to the search for effective countermeasures. A photo taken on July 22 at Fire Base Bell outside Makhmour shows one such countermeasure, “DroneDefender,” developed by Batelle. The Washington Post’s Thomas Gibbons-Neff describes how it works:

The system has the ability to disrupt the user’s control link to their drone as well as its ability to sync with a GPS network. It is unclear what type of frequency the rifle uses to attack its target, but the size of the dual front-mounted antennas suggest that the disruption pulse is distributed across multiple radio frequency bands. The rifle has a range of roughly 400 yards, will hit a drone in a 30-degree cone and can be ready to use and fire in less than a second, according to the site. Aside from the antennas and the attached battery pack, the anti-drone rifle appears to be very similar to the M-16/M-4 series of rifles carried by U.S. troops, including a similar stock and attachment system for accessories such as scopes and flashlights. . . . The rifle takes “no extensive training.”

Given the difficulty of detecting small, low-flying targets, DroneDefender teams are paired with a specially designed portable radar that can detect drones several kilometers away.

The aforementioned Hezbollah attack against Syrian rebels on August 17 has justified the U.S. Army’s concerns. The Lebanese Shia group armed multi-propeller drones with artillery submunitions (possibly the Chinese-made MZD-2, a shaped-charge, dual-purpose ammunition) and used them against opposition forces near Aleppo.

That drones could be customized into “bomber drones” and airborne improvised explosive devices represents a dangerous milestone in asymmetric warfare—the innovative use of an increasingly popular and best-selling civilian technology in a (para)military context.

As the Daily Beast’s David Axe notes, drones are “cheap, easy to procure, and simple to operate. For all but the most impoverished military force, a $200 quadcopter is disposable. And that means the type could crop up again not only in Syria, but also on battlefields all over the world—as a bomber... or as a bomb itself, rigged to explode on command.” For that price tag, Axe points out, commercial UAVs are a sort of poor man’s precision-guided munition: “Hovering, commercial-style drones can fly only a short distance away from their operators and, under the best of circumstances, can haul only a few pounds of payload. But what the drone-copters lack in sheer power, they make up for in stability—hence their ability to accurately drop an unguided submunition.”

What lessons should Turkey deduce from all this, in order to field adequate defense and countermeasures to protect its troops and allies? Clearly, the TSK needs to improve its tactical and technical readiness in highly volatile kinetic environments, such as Syria. Loss of troops and equipment to antitank guided missiles and “bomber drones” in Syria will have significant political repercussions for the Turkish military, in the wake of the failed coup attempt of July 2016.

As the case of DroneDefender and the U.S. military’s other counter-drone technology studies demonstrate, adapting to technology-driven, rapidly evolving battlefield threats, especially within the context of asymmetric, irregular and hybrid warfare, requires several things:

• First and foremost, a very attentive survey of the tactics, techniques, technologies and materials used in today’s conflicts—be it in environments comparable to the plains of Ukraine, the deserts of Syria, or Iraq’s urban areas.

• Next, extensive research-and-development, testing and evaluation processes for new technologies and combat systems and development of tactics, techniques and procedures must follow. Taking into account trends in military technologies, with respect to militarized consumer drones, the TSK should look into man-portable counter-drone systems, electronic warfare equipment and low-power lasers (five to ten kilowatts) that can be transported on light tactical vehicles around the frontlines.

Turkish manufacturer Aselsan has been developing air-defense weapons systems and ground-surveillance radars for years. Korkut, a twin-barreled thirty-five-millimeter self-propelled antiaircraft gun, is slated to be deployed on the Syrian border. Likewise, the TSK has fielded a Ku-band ground surveillance radar, the ACAR, for the past few years.

These systems, however, are designed primarily against conventional threats and may not provide an adequate defense against weaponized high-tech consumer drones. It is clear that the Turkish military has to work harder (and more quickly!) to counter buzzing mini-bombers.

Of course, it is not just Turkey, but its NATO allies as well, that needs to be more vigilant against emerging threats that weaponize widely available civilian technologies. After all, we live in a world where, to paraphrase William Gibson, the future of warfare is already here but it is not evenly distributed. Advances in miniaturization, computing and robotics, coupled with developments in directed-energy weapons and electronic warfare, are helping state as well as nonstate actors and shaping tomorrow’s battlefields. Any military power that wants to overmatch its current and future adversaries has to redistribute the future to its own advantage.

Bleda Kurtdarcan is a lecturer at Galatasaray University School of Law in Istanbul, where he teaches public international law. He obtained his Ph.D. from Galatasaray University in 2014 and his LLM from Université Paris 1 Panthéon-Sorbonne in 2005. He specializes in law of armed conflict, law of the sea, maritime security, and the privatization of military services. He is the co-author of the book titled (in Turkish) Wars and Weapons of the Future: An Appraisal of Autonomous Weapon Systems, Lasers, and Computer Network Attacks Under the Law of Armed Conflict.

Barın Kayaoğlu is an assistant professor of world history at the American University of Iraq, Sulaimani. He obtained his doctorate in history from the University of Virginia, and he is currently working on his first book, based on his Ph.D. dissertation, on U.S. relations with Turkey and Iran from World War II to the present and pro- and anti-American sentiments in the two countries. You can follow him on www.barinkayaoglu.com, Twitter (@barinkayaoglu), and Facebook (Barın Kayaoğlu).