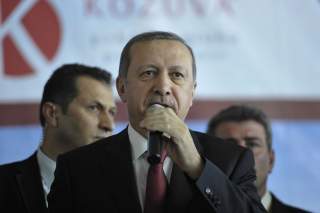 Last month’s failed coup attempt prompted numerous questions about Turkey’s relations with the West, and especially with the United States. At the heart of those questions lies a phenomenon that a New York Times editorial has dubbed “Turkey’s new anti-Americanism.” This “new” anti-Americanism found its voice in countless articles and opinion pieces recently published in Turkey that hold the United States directly responsible for orchestrating the failed attempt, as well as many government officials who have made comments about U.S. involvement in the failed coup.

Western spectators are caught unprepared. The intensity of the anti-American sentiments have convinced many that the failed coup will eventually trigger a “break-up” between Turkey and its long-time NATO ally, the United States. The narrative is simple. Turkey blames the cleric Fethullah Gülen—who lives in the United States in self-imposed exile, and whose green card application included a reference from a senior CIA official—for the failed coup, asking for his extradition. The United States so far remains unconvinced by the presented evidence that ties the failed coup to Gülen, a denial that in fact fuels anti-Americanism in the country. Widespread and rising anti-Americanism, so the narrative goes, will eventually force the Turkish government to sever ties with the United States, probably pushing Turkey into alliances with Russia and even Iran.

Such thinking is misleading, and follows from an acute inability to make sense of Turkey’s new anti-Americanism. It is true that U.S.-Turkish relations may deteriorate even further. However, even then, anti-Americanism will be a mere venue for such deterioration (to be employed by Turkey’s controversial president Recep Tayyip Erdoğan), not the cause or the driving force behind it. Put bluntly, present-day anti-Americanism in Turkey is harmless and will not lead to a breakup between Turkey and the United States all by itself—that is, unless President Erdoğan consciously decides to sever ties with the United States. If he ever makes such a decision, then anti-Americanism will be his way of convincing Turks that it is time to turn away from the West, not a force compelling his behavior.

That anti-Americanism has been very strong in Turkey for a long time is not just a claim; it is a fact. In a study published in American Political Science Review in 2012, political scientists Lisa Blaydes and Drew Linzer established that Turkey ranks first in the Islamic world for its anti-Americanism, with 90 percent of the population self-identifying as anti-American. The same study, joining many others, also points toward another fact that usually escapes Western spectators: it is not a particular group—say, Islamists—that professes unfavorable opinion of the United States. Anti-Americanism is shared by all ethnic, religious and political groups, and cannot be explained by differences in education or income levels.

Similar trends also apply to Turks’ perception of NATO: while Turkey has been a key member of the alliance for more than sixty years, a Pew Research study from 2014 found that only 19 percent of the population has a favorable opinion of NATO. In other words, Turkey has not discovered anti-Americanism in the aftermath of the failed coup; it is the Westerners who are discovering what has been out there for a long time.

Of course, this long-term trend itself begs the question: why would Turks, even the most educated and Westernized ones, dislike (or even abhor) the United States? From a historical point of view, anti-Americanism has its roots in the Cold War. Backed and inspired by the Soviet Union’s communist regime, Turkey’s leftists failed to exert decisive influence on almost every front but one: their anti-U.S. and anti-NATO propaganda (which was in fact the Soviets’ main concern and target, more so than “America” per se) had staying power, eternally branding the United States as a greedy and near-omnipotent “imperialist.”

The Soviet-infused interpretation of the United States resonated well with the country’s two main (and opposing) groups, secular Kemalists and conservative Islamists, for different reasons. According to conventional Kemalist thinking, modern Turkey is defined in terms of its struggle against imperialists. In particular, Kemalists’ foundational myth draws upon Mustafa Kemal Atatürk and the War of Independence he led after World War I, where the main enemy was the imperialistic ambitions of Britain and France, as epitomized by the infamous Sykes-Picot Treaty of 1916. In so many ways, Kemalists have always needed an outside imperialist threat to legitimize their ideology, and especially with the Soviet Union out of the picture, there hasn’t existed a better candidate than the United States to fit the bill for a long time.

For Islamists, in turn, anti-Americanism is all too easy and convenient: especially considering its heavy involvement in the Middle East, the United States makes for an ideal larger-than-life foe, one that allows Islamists to combine the socialists’ rhetoric of imperialism with the ever-popular narrative of Judeo-Christian crusaders.

Ironically, not only has anti-Americanism been dominant in Turkey for a very long time, but it also brings together groups with seemingly irreconcilable differences.

The second dynamic that is relevant to making sense of Turkey’s “new” anti-Americanism also unites Turks from all walks of life: an overwhelming majority of Turkish people—regardless of age, education, economic background, or religious or political beliefs—are conspiracy-theory junkies. Logic and facts, the bread and butter of sound analysis, usually take the back seat as Turkish people indulge in all-too-convenient “fables” that neatly explain quite literally everything, by pointing toward shadowy masterminds, usually residing abroad and operating in Turkey through their proxies.

Westerners may find it absurd that Turks believe the United States orchestrated the failed coup attempt. However, that kind of thinking is a fact of life in Turkey, where almost everyone is convinced that the United States was behind every single coup in the past and where many, ironically joining Donald Trump, think that the United States founded and funds Islamic State for its own purposes. Regardless of their political beliefs and education, most Turks will also confess that they think September 11 was an “inside job,” orchestrated by none other than the “deep state” in the United States, so that Americans would have an excuse to invade and destroy Iraq in particular, and the Middle East in general.

The idea that the United States is behind almost everything that goes wrong in the world is so strong and widespread that anyone who questions the relevant conspiracy theories runs the risk of being labeled as either a naïve fool who “just doesn’t get it” or a pen for hire (and, in some cases, a CIA agent). Long story short, in a country where conspiracy theories rule the day, it is not all that surprising for the media and political leaders to either indulge in such “theories” themselves or to use them to appease or energize the masses.

So, why should Turks’ penchant for conspiracy theories encourage Westerners to downplay the potential role that anti-Americanism can play in Turkish foreign policy? Simply put, just like their content, conspiracy theories’ real impact on politics is, for lack of a better word, fluffy. Conspiracy theories inspire passive reaction; they motivate people to indulge in fantasies and self-chosen paranoia, not take to the streets to push for policy change, especially when it comes to foreign policy.

The fluffiness of conspiracy theories, in turn, is a contrast to the third dynamic that is necessary to make sense of Turkey’s new anti-Americanism: the power Erdoğan holds over his supporters, which is what really matters in present-day Turkish politics, domestic or foreign. Understanding Erdoğan, in turn, requires recognizing his two key characteristics: his pragmatism and his “spell” over his followers.