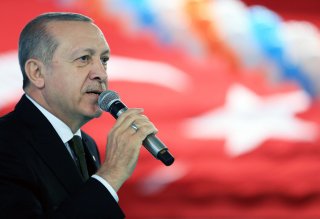 Turkey is a pivotal country, located with one foot in Europe and the other in Asia. It borders the European Union countries of Greece and Bulgaria and shares its southern borders with civil war-torn Syria, the autonomous Kurdish region of Iraq, aspiring regional power Iran, Russian ally Armenia, and Georgia. Across the Black Sea is Russia, a traditional foe and now tentative ally. With a little over eighty million people and one of the region’s largest militaries Turkey is of consequence for its neighborhood as well as the geopolitical calculations of the United States, Germany, Russia and the Middle East. Unfortunately, Turkey could well be heading into a major economic crisis.

Turkey has come a long distance since the chaotic 1970s and 1980s when oil shocks pummeled the economy, high inflation squeezed people’s wallets and military-civilian relations were characterized more than once by the rolling of tanks and the ousting of elected officials. The late 1990s through the first decade of the twenty-first century were marked by greater political stability, the ascendency of civilian over military power, strong economic growth, a taming of inflation and improvements in the average citizens’ standard of living. The man most linked to all of this is President Recep Tayyip Erdogan, who has gone from political strength to political strength, serving first as prime minister and then, upon changing Turkey’s constitution, stepped into the role of president, but with considerably enhanced powers from his predecessors in that office.

In the 2000s Erdogan’s Justice and Development Party (AK) won five consecutive elections (2002, 2007, 2011, June 2015 and November 2015). Although it ran as a party with Islamic roots, the AK won at the polls because of its pragmatism on economic issues, a lack of corruption and disillusionment with the country’s fractious secular parties.

However, the failed July 2016 military coup marked a turning point in in Turkish politics. While Erdogan’s AK triumphed over the military in earlier political infighting, it did so with the assistance of the Gulenists, who follow Turkish preacher Fethullah Gulen, who has lived in the United States since 1999. The Gulenists are seen as a religious and social movement, with a sizable number of followers in key parts of the Turkish state and business, conservative in many regards, and accused of being a secretive Islamic sect. The AK and Gulenists had a falling out, with the latter allegedly launching the 2016 coup.

In the coup’s aftermath, Erdogan’s rule has become considerably more autocratic and the country’s political freedoms have been curtailed in the name of national security. Along these lines, Erdogan purged the country of possible Gulenists, cracked down on the country’s Kurdish minority and embarked upon military actions against Syria’s Kurds, who have become one of that country’s major armed forces groups.

But it is the economy that looms as the biggest problem for Turkey. The Turkish economy expanded by a robust 7.0 percent in 2017, powered by a sizable surge in credit, driven by state loan guarantees and fiscal support. Export expansion, helped by a weak lira, was also a key factor.

The challenge is for the Turkish economy to step back from overheating the economy. Inflationary pressures are on the rise and the current account deficit is widening and likely to stay around 5.0 percent of GDP. Turkey could end 2018 under fiscal stress, financing concerns over its large account deficit and rising inflation, all of which could have political ramifications. The government is apprehensive that if it slows the economy by tightening monetary policy, it will hurt the ruling AK party in the elections for president and Grand National Assembly scheduled for November 3, 2019.

Turkey’s economic problems cannot be swept under the carpet. The overheating economy has drawn the attention of the International Monetary Fund, which in its concluding statement of the 2018 Article IV mission warned, “Areas of risk could become more apparent should external conditions take a negative turn. Vulnerabilities include large external financing needs, limited foreign exchange reserves, increased reliance on short-term capital inflows, and high corporate exposure to foreign exchange risk. Signs of possible oversupply in the building and construction sector are also emerging. While risk triggers are, by their nature, difficult to project, they could stem from domestic developments or regional geopolitical developments such as changes in investor sentiment towards emerging markets.”

The IMF’s criticism was not appreciated by Turkey. The words of one of President Erdogan’s senior economic advisors, Cemil Ertem, clarified the view from Ankara. According to Ertem, IMF suggestions that Turkey rein in spending and tame inflation were based on “failed economic theories, peddled by dinosaurs.” Indeed, he went on to stress, “We are going to do the exact opposite.”

The problem for Turkey is that it plans to keep pump-priming the economy as the Federal Reserve and European Central Bank tighten monetary policy, which means the cost of borrowed money is on the rise. This type of policy may achieve another year of strong growth, but it sets the stage for a hard-landing. At the same time, there are growing questions about the independence of the Turkish central bank, its awareness of the depth of the problem, and whether or not it will be able to contain inflationary pressures.

One of Erdogan’s advisers and an economics professor, Hatice Karahan, has dismissed the prospect of a sudden halt in the flow of foreign funds, noting that “even in the worst-case scenario I would not expect any drying up in the capital flows.” Considering that some of Turkey’s past economic crises were related to problems in financing the current account, Karahan’s statement seems a little misguided. Moreover, capital flows can dry up; ask anyone who went through the Latin American debt crisis in the 1980s and 1990s or any of the southern European countries, like Greece and Portugal in the recent European sovereign debt crisis.

The potential for an economic crisis in Turkey has not been just flagged by the IMF. In March 2018, the rating agency Moody’s downgraded the Turkey from Ba1 to Ba2 and maintained a negative outlook. As the agency stated, “The government appears still to be focused on short-term measures, to the detriment of effective monetary policy and of fundamental economic reform.” Moody’s also made a reference to “the increased risk of an external shock crystallizing, given the country’s wide current account deficits, higher external debt and associated large rollover requirements in the context of heightened political risks.”

Looking ahead, Turkey is heading into what could well be choppy economic waters, driven by the belief that strong growth must be maintained for President Erdogan and his AK Party to win re-election in November 2019. The question is: can the economy be kept afloat that long? With international rates on the rise, a potential slowdown in global economic expansion related to an increase in trade protectionism and ongoing expenses from Turkey’s military ventures into northern Syria, the country’s government finances are likely to get squeezed between rising borrowing costs and investor concern. In a sense, President Erdogan is taking a major gamble on international conditions remaining conducive to investors putting their capital into an increasingly risky situation. Considering the shifting tides of geopolitics and rising prospects for a major financial markets correction at some point in the months ahead that could be a bad bet. Turkey appears to be heading for a major economic crisis, much of it of its own making.