Turkey’s Elections: Will It Be More of the Same? 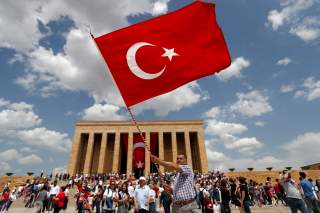 Preliminary results show that President Recep Erdogan of Turkey has been re-elected in the first round with 52.6 percent of the votes. His closest rival, Muharrem Ince of the Republican People's Party (CHP), polled 30.6 percent. The opposition’s strategy of setting up several candidates in the first round who could appeal to different constituencies was aimed at forcing Erdogan to contest the second round by denying him a majority in the first. This would have detracted from Erdogan’s image of invincibility; it also would have helped the opposition to improve the morale of its supporters and to consolidate its votes in the second round, thus increasing the possibility of defeating Erdogan. This strategy has obviously failed and Erdogan is now in a position to act for the next four years (and possibly more) with almost unrestrained authority with all executive powers concentrated in his office and with the National Assembly’s oversight reduced drastically under the new constitution.

The outcome of the simultaneous parliamentary elections has been mixed with the ruling Justice and Development Party (AKP), which polled 42.6 percent of the votes, winning 295 seats and six short of a clear majority. With its alliance partner—the ultra-nationalist Nationalist Movement Party (MHP)—it controls 344 seats, giving the government a comfortable majority. If the coalition holds together, as it is likely to, Erdogan can be assured of a docile legislature that would allow him to implement much of his domestic program and follow a foreign policy of his choosing.

However, one thing is clear. Erdogan would not have been elected in the first round had it not been for his alliance with the MHP whose supporters voted for him in large numbers. He is also dependent upon the MHP for his parliamentary majority. In this sense, the MHP is the real victor in these elections and is bound to demand its pound of flesh sooner or later. While Erdogan himself has of late been pandering to the ultra-nationalist constituency to mobilize their support for his presidential bid, dependence on the MHP is bound to curb his freedom—especially on the Kurdish issue if he decides to change course and begin negotiations with Kurdish representatives again. This means that the Kurdish insurgency will continue indefinitely into the future.

The election victory and pressure from the virulently anti-Kurdish MHP is likely to bolster Erdogan’s resolve to continue to use force against the YPG in Syria. Thus, Turkey’s relations with the United States will become even more complicated, since Washington considers the YPG an ally in its fight against ISIS. Reports suggest that Erdogan is also itching to take the battle against the Kurds to the PKK redoubt in the Qandil Mountains in Iraq. Apparently, he had sought Iranian support for this venture since Tehran and Ankara share the fear of Kurdish separatism. Iran has rejected the idea, because it would violate Iraqi sovereignty. Further Turkish incursions into Iraqi Kurdistan in its battle against the PKK are likely to alienate the government of Iraqi Kurdistan, which has so far tolerated Turkish unilateralism on this issue because of its economic dependence on Ankara.

Despite the Iranian refusal to support a Turkish attack on Qandil, Turkey’s relations with Iran will continue to improve under Erdogan—who has not forgotten Iran’s support to him on the night of the failed coup of July 2016. Iran’s Foreign Minister was in constant touch with his Turkish counterpart throughout that night, encouraging the Turkish government to stay the course against the rebels. The partial removal of sanctions against Iran has opened up further avenues of economic cooperation between the two countries, despite American pressure on Ankara not to engage Tehran economically. Moreover, the Iranian regime prefers a moderate Islamist like Erdogan over the secular CHP to rule over Turkey—especially since the former shares some of the Iranian suspicions regarding Western designs against the Muslim world.

What the elections have clearly demonstrated is the deep polarization within Turkey with almost half the electorate opposed to Erdogan’s dictatorial ways and his attempt to introduce “soft” Islam into the Turkish polity. The polarization is also regional: the western seaboard, the most developed and cosmopolitan part of the country, supports the secular CHP; the more conservative provinces of the Anatolian interior, except the Kurdish southeast, support the AKP.

The secular-observant schism continues to form a major dividing line in Turkish politics. One of the most unfortunate consequences of the AKP monopolizing Islamic orthodoxy and trying to, however carefully, force it down Turkish throats, is that, as has happened in Iran, it is likely to bring Islam into disrepute. For when religion and the state coalesce, it is the state that is in the driving seat and distorts religious prescriptions to suit its political ends. The instrument for state control of Islam is very much at hand in Turkey with the Directorate of Religious Affairs controlling all mosques, writing all Friday sermons, and paying imams and other religious functionaries.

However, since the ruling elite in the pre-AKP days was unabashedly secular and anti-religious the attempt through the Directorate of Religious Affairs at creating an official and docile Islam was seen for what it was—a political ploy—and did not tarnish the image of Islam amongst the common people. Now with an observant elite in power, state control of Islam could make Islam subject to the same negative feelings as half the population harbors about the ruling elite, which it considers to be corrupt and self-serving. Islam will, therefore, be painted with the same black brush as the Erdogan government itself. One should not be surprised if the same antipathy that many young Iranians demonstrate toward Islam today is witnessed in Turkey over the next decade or two.

The Turkish opposition had argued that the elections were a contest between populism and hyper-nationalism on the one hand and democracy and a liberal order on the other. It seems the former has a greater appeal to the Turkish people than the latter—and this does not bode well for the future of liberal democracy in the country. Erdogan’s autocratic tendencies and the illiberal ultra-nationalism of the MHP, a direct descendant of the neo-fascist Grey Wolves, are likely to feed upon each other and make Turkey increasingly illiberal. Not only will Turkey’s chances of joining the EU disappear, the fate of the hundreds of people held in jail for presumed links to the failed coup will continue to remain in jeopardy. This could change only if Erdogan, now returned to power and feeling more secure, decides to lift the state of emergency, begin removing restrictions on the media and the academia and gradually release the innocent languishing in Turkish jails. However, the probability of this happening soon seems remote at the moment.

Mohammed Ayoob is a senior fellow at the Center for Global Policy in Washington, DC and University Distinguished Professor Emeritus of International Relations at Michigan State University.