Turkey's Failed Coup: What Happened, Who's Behind It, What Happens Next? 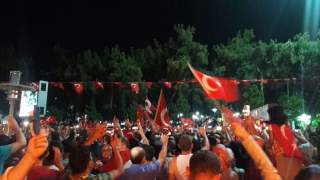 Turkey on the night of on 15-16 July looked a lot like the opening scene of the 2013 blockbuster Man of Steel. Dissatisfied elements of the military staged a coup against a political elite they saw as out of touch with reality and worse, treasonous. Although the Turkish junta failed just like its Kryptonian counterpart, as Paul Pillar wrote on The National Interest on 16 July, democracy “sort of” survived in the critical NATO ally. And the worst may yet to come for Turkey and its most important global partner, the United States.

In Istanbul, soldiers reportedly blocked the two bridges straddling the Istanbul Strait (Bosphorus) with tanks while armored units moved in to Atatürk International Airport. In the capital Ankara, tanks positioned themselves at critical intersections and several helicopter gunships began patrolling the sky. Clashes took place between junta forces and military and police units loyal to the government.

Around 11:15 p.m., Prime Minister Binali Yıldırım set up phone calls with television channels and confirmed an ongoing “coup attempt.” Soon after that, President Recep Tayyip Erdoğan, who was on vacation at the Aegean town of Marmaris, connected with media outlets via FaceTime and called upon citizens to march against the junta. Crowds soon followed suit. Around that time, an anchorwoman read the junta’s statement on state television, TRT. Curiously, the junta could not air its statement on other TV channels.

Meanwhile, civilians flooded the streets amidst gruesome images. Between 2 a.m and 4 a.m. TV channels showed the armored units blocking Bosphorus Bridge firing at civilians who had heeded Erdoğan’s call. In Ankara, helicopters fired at crowds who had gathered near the new presidential palace and the national assembly even as members of parliament were holed up inside.

Everything happened quickly after that. A defiant Erdoğan flew in from Marmaris and gave a speech to the crowd at Istanbul airport; all four political parties in parliament condemned the coup attempt; and military and police units in Ankara stormed the junta’s strongholds. Around 6:45 a.m., TV channels showed troops — many of them conscripts dragged into the bloody mess by their superiors who told them that it was a “special exercise” — surrendering to police on Bosphorus Bridge.

According to latest estimates, around 190 people died, 1,440 people were wounded, and nearly 6,000 members of the military and judiciary were taken into custody for their alleged role in the coup plot.

How Turks answer the “who dunnit” question depends a lot on their political views. Three narratives have emerged since 15 July.

President Erdoğan, his supporters in the ruling Justice and Development Party (AKP), and many of their opponents have blamed the cleric Fethullah Gülen for the attempted coup. Known to Turkish audiences as simply “Pennsylvania” for his self-exile in the Keystone State, Gülen is the leader of a global network of schools, businesses and charitable organizations. The septuagenarian preacher is also accused of establishing a secret network within the Turkish state.

A former ally of Erdoğan, Gülen fell out with the Turkish president over a corruption and illegal-surveillance/phone-tapping scandal in late 2013 / early 2014. Erdoğan subsequently orchestrated the mass purge of Gülenists from the bureaucracy. More recently, media outlets, corporations and universities affiliated with the Gülen network have been taken over by the Turkish state. Another round of purges within the military and judiciary were expected later this summer.

For AKP supporters and many secular Turks who dislike Gülen, the coup plot was a last-minute attempt to prevent that outcome. Pro-AKP folks also point to Turkey’s recent normalizing of relations with Israel and Russia (as well as the prospects of a similar normalization with Egypt) and accused Gülenists of worsening their country’s woes.

In contrast, Gülenists and some secular Turks argue that the coup attempt was merely a dog-and-pony show for Erdoğan to replace Turkey’s parliamentary system with a Putin-style executive presidency. Since coming to power in 2002, Erdoğan and his AKP have consolidated their popular support whenever the military (or the Gülenists) threatened their rule. In recent years, Erdoğan has signaled his clear dislike of not being able to concentrate all power in his hands, even though his party has maintained comfortable majorities in parliament save for a brief period in 2015.

Accordingly, Erdoğan’s critics argue that he basically set up a false flag operation to secure popular support for his political aspirations.

Without dismissing either scenario, it is more likely that the junta acted against their dual enemies, Erdoğan and Gülen. Turkish military high command and staff officers lost significant blood and prestige in the Gülen-orchestrated “Ergenekon” trials between 2009 and 2013, but the group that survived the purge has remained upset with Erdoğan for letting Gülenist police, prosecutors and judges run roughshod over them.

An overwhelming majority of the Turkish officer corps are trained under a staunchly secularist and pro-Atatürk curriculum at various military academies. It is hard to see how the junta could have staged a coup on Gülen’s whims.

The military has additional reasons to dislike Erdoğan without any instigation by Gülen. At a time when Turkey faces the consequences of Erdoğan’s follies — economic and political uncertainty, a reignited war with the Kurdistan Workers Party (PKK), and massive terror attacks by the Islamic State in Iraq and Syria (ISIS) — the Turkish military has been asked to assume great burdens. Sending hundreds of their comrades-in-arms home in caskets over the past year may have pushed some officers and NCOs over the edge to carry out a suicidal attack against their own government.

Although the coup attempt appeared weak from the start, things could have gone the junta’s way with a bit more luck — especially if they had gotten to Erdoğan and if they had additional hardware and ammunition to massacre civilians and anti-junta forces as a warning to the rest of the country. What the junta would have done to its opponents afterward — particularly against AKP supporters and Kurdish civilians in southeast Turkey — is anyone’s guess.

Therefore, the key question is whether Erdoğan and his AKP will understand the real source of the grievance against them. How they play their strong hand will determine the future of Turkey.

If the Turkish president backtracks from his ambitions and allows the drafting of a new constitution guaranteeing liberal-democratic norms (especially checks and balances) and strengthens institutionalized decisionmaking, Turkey’s domestic fortunes will improve considerably in the near future.

If, on the other hand, Erdoğan and the AKP call for snap elections to secure an absolute majority, draft an even more authoritarian constitution than the one Turkey now has, or simply use the current political context to suppress their detractors, things will only get worse for Turkey. Unfortunately, the second outcome seems more likely at the moment.

Irrespective of what happens at home, the 15-16 July coup plot is going to complicate Turkish foreign relations.

Ankara’s relations with Washington are especially likely to deteriorate over Gülen’s status. Since 2014, Erdoğan has made overtures to the Obama administration to extradite the Turkish cleric. After the coup attempt, Erdoğan called upon the United States either to expel or turn over “that individual” who is the “source of the virus in Turkey.”

Whereas Gülen was a painful nuisance before (and even served as a useful talking point to manipulate anti-U.S. sentiments among the Turkish electorate), the perception that he masterminded the junta to topple Erdoğan and the AKP has turned the exiled cleric into an existential threat. At a time when the United States needs to use Turkey’s airspace and military bases to conduct anti-ISIS operations in Iraq and Syria, every “no” and every "but American courts are independent" from the U.S. government in response to Turkish requests for Gülen's extradition will compound Ankara's anger against America and undermine U.S.-Turkish ties.

Although it is unlikely that Turkey will literally blow up like Krypton in Man of Steel, it is clear that no superhero — Superman or otherwise — will emerge from this mess. Of course, that was precisely the point of Man of Steel. As Jor-El told his son Kal-El (aka Clark Kent, aka Superman) the “S” on their costumes represents a hope that every person has the potential to be a force for good and build a better world.

Here’s to hoping that ordinary Turks can set aside their differences and memories of years of hatred, anger and bloodshed to build a better country.

Barın Kayaoğlu is an independent political analyst and consultant in Washington, DC, and he frequently writes and comments for U.S. and international news outlets. He received his doctorate in history from the University of Virginia in 2014. You can follow him on Facebook and on Twitter: @barinkayaoglu.