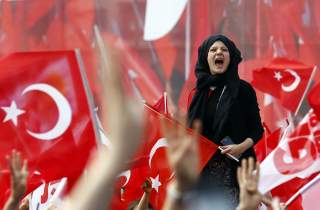 Every time there is a Turkish election, journalists who work on Islamic groups and movements like me are asked the question “which Islamic community supports which party?” This is a difficult question to answer since Islamic communities were banned shortly after the foundation of the Turkish Republic in 1923. They remained underground until the start of the multi-party system in 1946 when they gained more political legitimacy despite being still considered illegal. And, over the years, their illegal status became a convenient tool to deflect calls for “transparency” regarding these groups’ activities in the areas of education, healthcare, media, tourism, and many other fields.

Most of these Islamic groups followed politics very closely and kept in close contact with political parties. This allowed not only their survival as a religious community but also enabled them to benefit from government patronage and services. Yet, a certain level of duplicity was still ingrained in the leadership and public face of these Islamic communities. They tried to outbid each other with claims of being above politics despite their willingness to cut political deals behind closed doors.

But today we observe an entirely different situation before the double (parliamentary and presidential) elections of June 24, 2018. For example, Turkey's most powerful Sufi movement, Naksibendis, openly declared its unconditional support for Recep Tayyip Erdoğan and his Justice and Development Party (AKP) in the presidential and parliamentary elections. This also included Naksibendis' the three branches based in the Erenkoy, Menzil and Ismail Agha communities. Furthermore, smaller religious communities followed suit in with one exception—the Yeni Asya community. The Yeni Asya is one of the prominent branches of the Nurcu Movement, which has instead declared support for the opposition.

These declarations illustrate that the nature of the relationship between Islamic communities and Erdoğan's AKP is change. The AKP has been in power for the past sixteen years and there is no longer a pretense of distance or impartiality. Instead, there is a pronouncement of organic association and loyalty between the Islamic communities and the AKP. This is a risky move for civil society movements which normally should maintain some level of independence from the government.

It is also quite telling that Erdoğan no longer has a clear monopoly over the religious vote. In an unusual move, the party that represents Turkey’s Milli Gorus movement—the first to come to mind when talking about Islamic politics in Turkey—has joined an electoral alliance with the center-left, secularist Cumhuriyet Halk Party (CHP). This may partly explain the religious communities' unusually open and vocal commitment to Erdoğan. In their eyes, the CHP is "the center of all evil against religion." At the end of the day, the election on June 24 will determine not only the fate of Erdoğan but also the future of religious communities who are betting their survival on one single politician.

The special case of the Gülen movement

To understand the overt loyalty of Islamic communities to Erdoğan, one has to analyze the road traveled by the Turkish cleric Fethullah Gülen in his cooperation with the AKP.

After breaking with the Nurcu movement in the beginning of the 1970's, Gülen laid the foundations of his own religious community in Izmir. Education was his top priority, and over the years he managed to create a global network of schools and businesses. Like other religious community leaders, he was keen on staying above politics, while bargaining and negotiating with political parties behind the closed doors.

What differed his movement from others was his vision to infiltrate the state apparatus, particularly the security establishment and the judiciary to form a secret, hierarchical and parallel structure within the governmental bureaucracy. In this effort, Gülen actively sought political support.

The first public appearance of Fethullah Gülen was on June 29, 1994, at the opening ceremony for his Journalists and Writers’ Foundation in Istanbul’s Dedeman Hotel. Starting from that day, Gülen has presented himself as the “mild” antidote to “radical Islam.” He did this by making statements to the media, meeting with political leaders, and by visiting the Pope in the Vatican. Furthermore, Gülen also worked on bringing together people from every walk of life into well-publicized and pompous meetings.

For Gülen, “radical Islam” was the political moment where Erdoğan began his political career as a young Islamist. For instance, the Refah Party (RP) formed a coalition government in 1995 that was toppled by the military by the soft-coup of 1997.

But in the eyes of the generals, Gülen was far more dangerous than the RP. He was the real threat to secularism, not the “mild antidote” to radical Islam. Therefore, on March 21, 1999, Fethullah Gülen left Turkey for the United States and gave “treatment purposes” as an explanation. He has been directing his movement from a ranch in Pennsylvania since then.

It was the army that would pay the way for Erdoğan and Gülen to come together. Under normal circumstances, Erdoğan and Gülen would not have forged a strong alliance. The two did not trust each other. In the year 2007, when the Generals tried to stop AKP's co-founder Abdullah Gul from becoming the President by using his wife's headscarf as alleged proof of Islamic radicalism, Turkey found itself in a full-scale political war. On one side, there was AKP which consolidated its power by an early election; and on the other side, there was the army and the people supporting it in the name of protecting the secular nature of the state.

During this period, Gülen helped Erdoğan to eliminate the system of military tutelage by putting his cadres in the security services and media network into Erdoğan’s service. These deeds did come with a price. For example, the executives of the Gülen schools abroad—which are now under pressure by the Turkish government which wants to close them down—were at one point more valued than the Turkish diplomats. Under the AKP, Gülen managed to overshadow all other Islamic communities and had a quasi-monopoly over “social Islam” in Turkey.

The peak of the alliance between Erdoğan and Gülen was during the constitutional referendum in 2010. In his video speech for the referendum that would complete his control over the judiciary, Gülen asserted "everybody even people in their graves should be mobilized to vote." In return, Erdoğan reserved a quota for Gülen group in the upcoming elections. But within a short period of time, a power struggle began between the two. Between December 17 and 25, 2013, the Gülenist police and judiciary started opening up corruption investigations against Erdoğan and his close associates, launching a full-fledged war between them.

The fiercest battle came during the failed coup attempt of 15 July 2016. Erdoğan survived and emerged from the crisis determined to crush the Gülen movement. For now, it seems Erdoğan is the winner. For evidence, we can point to the fact that Gülen and his group has no longer any power to impact the June 24 elections. Thousands of Gülen supporters were arrested, dismissed from their jobs and had to leave the country. His institutions which he tightly controlled (prep schools, private schools, businesses, media companies, syndicates, foundations, and associations) were all either shut down or transferred to government-appointed caretakers. The propaganda efforts of the Gülenists, who are now an in effect a diaspora movement, are to no avail in Turkey.

Gülen and his movement are being used to demonize all opposition to Erdoğan and his allies. For example, the newly formed Iyi Party (Good Party) and its leader Meral Aksener are being accused of being "secret" Gülenists.

The Gülenists will not be able to produce any effect upon this elections, yet they are certainly hoping that Erdoğan’s days in power are numbered. Erdoğan has been suffering from an ever-deepening ideological and political crisis since the July 25, 2016 coup attempt but his escalating war with Gülen serves him well.

Ruşen Çakır is an award-winning Turkish journalist who launched the independent online news portal Medyascope. Mr. Cakir has won journalism awards from various institutions including from the International Press Institute. He started his journalism career in the Nokta magazine, and he continued his profession in various newspapers, journals, and television channels. He penned fifteen books, on a wide variety of issues including Islamist movements in Turkey and Turkey's Kurdish question. After thirty years of work as a correspondent, columnist, and commentator in mainstream media, he now works as an editorial director and commentator on Medyascope-TV.