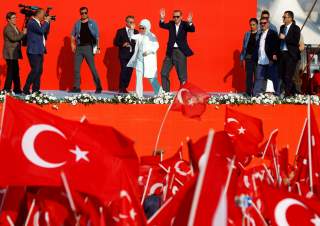 Since coming to power, Recep Tayyip Erdoğan has been controversial, to say the least, due in large part to policies and practices which the West sees as openly authoritarian. He also used what an attempted coup against him to justify a further consolidation of his power.

This coup attempt came in reaction to a series of clampdowns. Perhaps the two most significant were the repression of the Gezi priests and 2013 repression of the movement of Fethullah Gülen. (A cleric and former political ally of Erdogan’s and founder of a substantial network of schools, he is accused by the regime of having organized the coup in July 2016. He lives in exile in the United States.) He also boosted his own authorities as president after winning the country’s first direct elections in 2014. He ended a peace process with the Kurds and enacted a state of emergency following the beginning of the waves of Islamist attacks in 2015. Since the state appeared to have been threatened by the coup attempt, the government launched unprecedented purges and routinized increasingly serious violations of the rule of law.

With the steadily rising autocracy of the Turkish president has come his apparent belief that he has the right to shape every aspect of Turkey’s political, social, cultural and commercial policies. His victory in the last election—following a referendum last year—has made him a head of state with unchecked powers, and added to a sense of entitlement on his part.

Every day, the pressure on the Turkish President is increasing, amid a divergence between the Trump administration and the Erdogan regime.

Turkey agreed, in 2015, to allow the U.S.-led coalition fighting the Islamic State group in Syria to use a key air base and has been part of the coalition against the jihadists. But its opposition to Syrian Kurds who dominate the Syrian Democratic Forces (SDF), supported by the coalition, has complicated its role.

The Kurdish People’s Protection Units (YPG) militia is an ally of the United States, but Ankara accuses it of being a terrorist organization. Ankara says the YPG is the Syrian offshoot of its outlawed Kurdistan Workers’ Party (PKK), which has waged a three-decade rebellion in Turkey’s southeast.

The YPG controls key Syrian northern towns, which triggers Turkey’s fears of the emergence of an autonomous Kurdish region in Syria, which could have implications for its own territory.

In 2016, Turkish troops launched an operation in Syria to drive out Islamic State fighters as well as Kurdish militias. But Turkey was angered when the U.S.-led coalition said in January it was working to create a thirty-thousand-strong border security force, around half of whom would be retrained members of the SDF.

It launched a new air-and-ground operation to oust Kurdish fighters in northwest Syria, defying U.S. warnings that it risked destabilizing the area.

The July 2016 attempted a coup against left 249 people dead, not including those who plotted the coup.

Erdogan, on vacation at the time, blamed the coup attempt on Muslim preacher Fethullah Gulen. The Turkish head of State has demanded that the United States extradite the cleric, but to no avail. Turkey has since carried out major purges of the civil service to remove Gulen supporters.

Washington reacted to the charges by suspended the majority of its visa services for Turkey. In response, Ankara did the same. The restrictions were lifted at the end of 2017.

In 2016, former U.S. President Barack Obama warned that Turkey’s approach towards the media was taking it “down a path that would be very troubling.”

According to the the P24 press freedom group, there are 156 journalists behind bars in Turkey, most of whom were arrested after the failed coup bid.

The United States also criticized the 2016 detention of several U.S. citizens for allegedly being part of the Gulen network. NASA scientist Serkan Golge, a dual national, was sentenced to seven-and-a-half years in prison last week for being a member of Gulen’s movement. The State Department says he had been convicted “without credible evidence.”

U.S. pastor Andrew Brunson, who ran a church in Izmir, has been held on similar charges since October 2016.

Qatar has come to the aid of Turkey amid its ongoing financial crisis, after the central banks of both nations signed a currency swap agreement in a bid to provide liquidity and financial stability to Turkey

The two states are the region’s staunchest supporters of the Muslim Brotherhood and Hamas, and have shown a willingness to flirt with Tehran. Bilateral ties with Turkey, based on a similar ideological outlook, are strengthened by military and financial partnerships that are vital for Erdoğan. But among the perils of this new alliance, Qatar’s history of promoting Islamism through soft power promises to enhance and consolidate support for the same movements which Erdogan has been proffering systematically for over a decade.

As Qatar faces international pressure to stop harboring senior Brotherhood figures, there are clear indications that it will facilitate their migration to Turkey. So among the urgent challenges for the U.S. allies to address is the question of how to weaken this budding alliance.