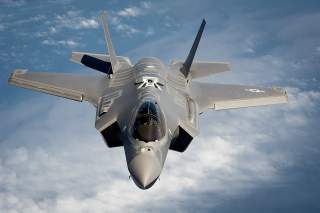 During WWII, our military initially gave preference to the application of more armor to the areas of returning, combat aircraft that showed damage from flak. The mathematician Abraham Wald upturned this paradigm through his postulation that since the damage in downed aircraft could not be observed and the observed damage in returning aircraft was, perforce, tolerated, the areas that should be up-armored were the unmolested and not the damaged sections of returning planes.

Abraham Wald’s insight also pertains to negative space—what surrounds an object, which defines boundaries and illuminates the whole. Important issues in defense procurement should be considered and resolved through the assessment of current and past programs, including those that have been cancelled. Historical contexts must be examined. From this inquiry, a path forward may be suggested.

The story, therefore, of the epochal F-35 fighter program begins with the Edsel, though not in the colloquial meaning of the word. The story of the F-35 begins with the actual car named Edsel.

Before Robert McNamara become Secretary of Defense, he was the first president of the Ford Motor Company who did not bear that company’s name. Before McNamara’s ascension to the presidency of the company, five product divisions existed, Ford, Edsel, Mercury, Lincoln, and Continental.

McNamara, seeking efficiencies, merged the Continental division into Lincoln; he then sought to combine Edsel, Mercury, and Lincoln into one division. Finally, McNamara stripped the faltering Edsel division of its advertising budget, and then cancelled it outright. Ultimately, he sought to remake Ford such that it would have but one product line. This was not to be since McNamara was appointed Secretary of Defense before his reductive plan could be approved and implemented.

Within a month of his confirmation as Secretary of Defense, McNamara ordered the Navy and the Air Force to terminate their separate fighter development programs and to initiate a joint fighter program. With support from the Director of Defense Research and Engineering, McNamara exerted a commanding influence on service acquisition programs. From May 1961 to October 1965, Dr. Harold Brown served as Director of Defense Research and Engineering (Brown would later become Secretary of the Air Force under McNamara and, finally, Secretary of Defense under President Carter).

Thus, by the summer of 1961, the Tactical Fighter Experimental (TFX), which would become the F-111, was begun. McNamara’s obsession with commonality, caused his choosing the General Dynamics design over the superior Boeing proposal ─ a proposal that had, in fact, been selected by the Source Selection Board. McNamara’s selection was made on the basis of his giving more weight to commonality as the prime decision factor, for it was in this realm, and not in performance, that the General Dynamics design was putatively superior.

McNamara made his decision without consulting directly the Air Force Chief of Staff, Curtis LeMay, or the Chief of Naval Operations, George Anderson, who both favored the Boeing design. McNamara’s decision was tainted, too, by the specter of Texas election politics’ commandeering the prime-contractor decision. Though hearings held by the Senate’s Permanent Subcommittee on Investigation of the Committee on Government Operations did not establish undue political pressure as the root of McNamara’s decision, it is inarguable that President Kennedy’s perceived political weaknesses in the South, his debt to Vice President Johnson for the delivery of Texas in the 1960 election, and General Dynamics’ financially ruinous development of the Convair 880 and 990 airliners, created a political environment supportive of McNamara’s decision.

As an unanticipated consequence of the F-111 program’s focus on commonality at the expense of performance, both the Navy and the U.K., once core participants, would drop out, though the Navy undertook extensive efforts to reduce the F-111B’s weight and the U.K. cancelled its own new strike aircraft, the TSR-2, due to U.S. pressure on the Macmillan government to adopt a British version of the F-111, the F-111K. In the case of Britain, the cancelation came hard upon near disastrous U.S.-U.K. bilateral decisions concerning defense, for Britain had cancelled both its Blue Steel II and Blue Streak strategic-missile programs in favor of the U.S. Skybolt missile, which, in turn, was cancelled by McNamara before deployment. Thus, America’s closest ally faced profound voids in its force structure ─ voids that were caused by the pursuit of commonalities at the expense of capabilities.

Indeed, McNamara’s pursuit of commonality was so absolute that he delayed for three years the Air Force’s 1965 production order for 93 F-12Bs (the production version of the YF-12A, an interceptor that was part of the Oxcart/Blackbird family of aircraft). McNamara then cancelled the F-12B and ordered, in 1968, that all Oxcart/Blackbird-associated specialized tooling be destroyed to obliterate any possible Air Force or Congressional gambit to build an aircraft with greater interception or strike ability than that possessed by the F-111. In this act, he mirrored the prior Canadian decision to destroy all CF-105 production tooling, after the termination of that advanced fighter program in favor of the purchase, from the United States, of less-capable F-101 fighters and nuclear-tipped Bomarc missiles that were subsequently stood-down.

It is ironic that the termination of the Oxcart/Blackbird family of aircraft actually struck a blow against the purported advantages of commonality, shared by different aircraft types, for the SR-71A reconnaissance aircraft, the F-12B interceptor, the proposed B-71 strategic bomber, as well as a strike variant, to be armed with inert, penetrating, kinetic-energy weapons, could have shared a high degree of commonality as well as many performance advantages not equaled by any production aircraft onto this day. Of course, the commonality that could have been achieved via a constellation of different aircraft derived from the Oxcart/Blackbird line would be relegated to one service, the Air Force. This was its death knell, for McNamara sought and demanded joint-service commonality and international program participation. These were the two, alleged attributes of the F-111. Nonetheless, despite all attempts to shore up the F-111 program, the projected F-111 buy was cut ultimately by more than two thirds.

Thus, the reductionism and commonality that McNamara only completed episodically at Ford, was more forcefully implemented at DOD, through the aggrandizement of the Office of the Secretary of Defense, with disastrous results. Later, the joint American-German MBT-70 tank program would be cancelled due to its incongruent priorities. Secretary McNamara did succeed, however, in creating the Tri-Service Aircraft Designation System, which required the Air Force rename its F-110 Spectre—the F-4 Phantom, after the Air Force adopted this fighter, developed by the Navy. Therefore, the Navy and Air Force did obtain a joint-service fighter, but one that was developed solely by the U.S. Navy, only to be adopted by the Air Force, the Marines, the British Fleet Air Arm, and the air forces of eleven other countries, including Britain.

Noting the failure of the F-111 as a joint-service aircraft, the success of the F-14 and F-15 fighters, which were both developed independently by their respective services, and the Navy’s refusal to adopt a navalized version of the F-16, preferring instead the twin-engined F/A-18, which was a development of the YF-17, the aircraft that lost the Air Force’s Lightweight Fighter (LWF) competition, it should have been expected that President Clinton’s Secretary of Defense, Les Aspin, and his deputy, William Perry, would have rejected, out-of-hand, the concept of a tri-service fighter. However, by the early nineties, bureaucracies within the Office of the Secretary of Defense (OSD), including the Office of the Deputy Secretary of Defense, the Under Secretary for Policy, and the Under Secretary for Acquisition, had become too powerful and too covetous of the continued accretion of power that would result from their steering and their oversight of such a concatenated program.

Though most observers know that the F-35 program grew out of the Joint Strike Fighter (JSF) initiative, it is important to recognize that the JSF was formed by the fusion of the Common Affordable Lightweight Fighter (CALF) program with other service-led development programs. CALF was begun in 1993 to support the development and acquisition of a V/STOL (vertical/short takeoff and landing) aircraft to replace the Harrier in both Marine Corps and Royal Navy service. Thus, the F-35B STOVL (short takeoff and vertical landing), and not the conventional-takeoff F-35A, must be considered the hub of the entire F-35 program, for the STOVL capability is by far the most difficult to integrate into the stealth design. (The interest in STOVL was also propelled by Lockheed’s access to Russian Yak-141 lift fan, thrust-vectoring nozzle technology, though this concept was conceived earlier.)

The heart of the F-35 program is and has been the F-35B’s STOVL ability, an ability of virtually no value to a fighter, and of highly debatable value to a ground attack plane, since the STOVL ability compromises range; further, the advantage of landing in forward, unprepared areas is an ability that may be rarely exercised given the F-35B’s $122 million price per plane.

The F-35 program exceeded the wildest nostrums, which propelled commonality in the F-111 program, by forcing as its unique attribute an ability (STOVL) that was not needed nor incorporated in either the Air Force or the Navy versions of the plane. As for F-35’s vaunted commonality, Lt. Gen. Christopher Bogdan, of the F-35 Lightning II Joint Program Office, stated that commonality of twenty to twenty-five percent across the three service variants was achieved, which is about one third of the original commonality goal for the program.