The Twin Dangers That Threaten a U.S. Space Force 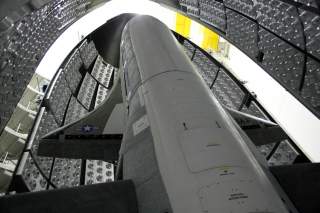 On September 5, U.S. Air Force Secretary Heather Wilson announced she had come around to President Donald Trump’s proposal to create a Space Force. But Wilson’s approval came with an important disclaimer: “If we’re going to do this, let’s propose to do it right.” Wilson’s statement was in the context of authorizing a new service through proper congressional channels. But a Space Force “done right” will have to address two other potential risks—avoiding exploding costs and mission creep. Vice President Pence recently suggested that one space oriented project could be the Lunar Orbital Platform-Gateway currently planned by the National Aeronautics and Space Administration (NASA). However, the proposed project would cost tens of billions of dollars and has been roundly criticized by pro-space advocates such as former astronaut Terry Virts. Such a station is precisely the kind of mission-less boondoggle any Space Force, or NASA for that matter, must avoid.

Elected officials and taxpayers are already asking what exactly a new military branch would cost and what purpose it would serve. After all, whether or not a Space Force reduces or exacerbates redundancy and spending in the Department of Defense (DOD) depends in large part on details no one yet knows. Would current space programs be absorbed by the new branch or allowed to continue in addition to it? (As of right now, 90 percent of unclassified funding already being spent to defend American interests in space is funneled to the Air Force.)

Even if the creation of the Space Force streamlines and consolidates American space-defense activities, there are other potential pitfalls policymakers will need to navigate. There is no reason to think the Space Force would escape any of the fiscal irresponsibility that has historically plagued the rest of the military-industrial complex. The Space Force will need to do better than current DOD space programs when it comes to cost overruns and timeline delays. For instance, in 2017, the GAO reported Air Force Space Command’s Advanced Extremely High-Frequency satellite program’s costs had grown 118 percent compared to its initial budget. The Space Based Infrared System program’s costs had ballooned by 300 percent. And both programs saw scheduled launch delays of three-and-a-half and nine years, respectively.

The DOD doesn’t have a monopoly on budgetary issues. In the past ten years, nine of NASA’s seventeen major projects experienced scheduling delays and cost overruns. Although NASA has shown some improvement over the past half-decade in controlling project budgets, unexpected expenses are hardly a thing of the past. The GAO’s estimate of future contractor cost overruns for the Space Launch System alone ranged from $367 million to about $1.4 billion. Given NASA’s high costs and lack of a firm direction, who is to say these problems will not be replicated?

This is not to deny the technological and defense achievements of the Air Force or NASA. The latest generation of the Air Force’s AEHF satellites, used to transmit highly confidential communication, are far more protected than previous generations against both electronic and cyber threats. (Although recent assessments of the Air Force and NASA’s cybersecurity capacities may leave observers questioning either department’s ability to appropriately protect American satellites.) But it’s a fast-moving world, and the current bureaucratic process regarding space acquisitions can be painfully slow moving. According to the GAO, “Expert space officials told us that because programs experience too much bureaucracy, it can take a minimum of 3 years to develop an acquisition strategy, issue a request for proposal, conduct source selection, and award a contract. By then, technologies and requirements can be obsolete.” So, perhaps there is a need for a Space Force if it could consolidate America’s various military programs, thereby reducing inefficiencies and redundancies. However, this would only work if the Space Force’s mission is clearly defined and made iron-clad.

Mission creep naturally happens when an organization continuously expands its goals and scope without any concern for redundancies, effectiveness or jurisdiction. It is a way for bureaucracies to compete for money, prestige and power, and it is never in the public’s best interests. Therefore, a Space Force that serves American national interests and taxpayers well must have its objectives firmly outlined in the legislation that authorizes its creation. Its mission should be the protection of all U.S. assets in space from potential adversaries. Most obviously, this would include the physical defense of vital platforms such as military and civilian communications and navigation satellites.

The physical threat to satellites is real, as Russia has launched four satellites that are suspected of being able to attack or disable American assets. First launched starting in 2013, most of these Russian satellites were not registered with the United Nations, and they have engaged in highly-precise maneuvers that could be used in wartime. Additionally, in 2007, China successfully tested an anti-satellite missile and also conducted tests in 2010 and 2013.

Cybersecurity of American assets is another area where the Space Force will need either to duplicate or coordinate defense duties. In 2014, a hacker infiltrated 30,000 U.S. Defense Department satellite phones, stealing personal data. Furthermore, that same year, Chinese hackers went after the U.S. governmental weather and satellite systems. Already, the U.S. military knows that it is likely to be blinded during a major war and is considering backups to GPS and other systems.

Regardless of whether the Space Force takes up a primarily physical or cyber mission (perhaps some combination of both would be best), the fact remains that any mission must be clearly delineated to serve America well. It must also be vastly different from previous space boondoggles and certainly from Vice President Pence’s ill-conceived suggestion of building a multi-billion dollar base to orbit the Moon. As Secretary Wilson said, if America is going to have a new force, it ought to be done right. America simply can’t afford another failure to launch.

Kathryn Waldron is a research associate at the R Street Institute where she supports the national security/cybersecurity policy team. She is also currently a graduate research fellow at George Mason University.

John Dale Grover is an assistant managing editor at The National Interest, a fellow at Defense Priorities, and a writer for Young Voices. He is also a graduate student in Conflict Resolution at George Mason University. Follow him on Twitter @JohnDaleGrover.

Image: The X-37B Orbital Test Vehicle waits in the encapsulation cell of the Evolved Expendable Launch vehicle at the Astrotech facility in Titusville, Florida in this April,2010 handout photo provided by the U.S. Air Force. The X-37B is the U.S.'s newest and most advanced unmanned re-entry spacecraft. REUTERS/U.S. Air Force/Handout