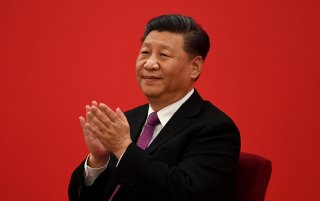 So although in principle this omelet can be made without breaking many eggs, Beijing won’t be cooperating. And the circle can’t be squared with clever phrase-making like “navigating the asymmetric competition” that looks satisfactorily reassuring on paper and in speeches to conferences but that need to survive the body blows that will inevitably be delivered by reality.

The group’s approach to Chinese investment in the United States (whether in the form of creating new businesses or taking over or contributing capital to existing firms) illustrates the other big drawback of granular approaches when it comes to China. It ignores how any Chinese entity big enough to play in any foreign market, and especially America’s, is under Beijing’s thumb in every important respect.

As a result, there’s no point in taking the time and expending the resources to follow the group’s recommendations to figure out which Chinese tech platforms (whose importance it emphasizes) are and are not violating American privacy standards or conducting misinformation campaigns dangerous to democracy, or censoring content Chinese authorities don’t like, or helping suppress human rights in China or anywhere else, or stealing valuable data, or helping terrorists and criminals launder money; or whether these activities matter enough to merit official U.S. attention, or whether troublesome practices can be negotiated away through talks with Beijing on technical and other fixes.

In this instance, Washington should stay out of the black holes of setting priorities, and especially monitoring and enforcing agreements, and, in fact, prohibiting all Chinese entities from owning U.S. hard assets. The latter step would add the benefit of shielding participants in America’s economy from competition with subsidized, market-distorting outfits from China. At the very least, Chinese entities should be required to prove that they’re not controlled or subsidized in any way by Beijing, or engaged in the above malign activities, before gaining entry.

In addition, despite the group’s understanding that the manufacturing ecosystems, not just final products, need to be rebuilt and nurtured to ensure supply chain security, it appears to underestimate just how widely these relationships extend. After all, most of the numerous inputs to goods like mechanical ventilators (like controls, power sources, monitors, and alarm systems) depend on big and complex supply chain and manufacturing ecosystems themselves.

Further, just as before the pandemic, few expected face masks and surgical gloves to become products vitally important to the nation’s well-being. Thus, the list of critical goods is likely to change and grow over time as new threats emerge. As a result, the group is correct in warning that “any product or service could be termed essential to national security in an extreme hypothetical.” But what’s the basis for confidence that many products or services can safely be ruled out, and that such hypotheticals will always remain extreme?

At least as important, like the Biden administration, the group’s determination not to ruffle too many international feathers has also clearly led it to back the notion that the definition of “Made in America” for supply chain purposes should actually mean “Also Made in Lots of Other Countries” that it considers to be trusted suppliers. Unfortunately, many of the countries classified imposed export controls on critical medical goods during the pandemic’s first wave last spring. That is, when cooperation was most needed, they built walls—meaning that their trustworthiness isn’t exactly ironclad.

And as then-president-elect Biden learned when the European Union rebuffed his entreaty to consult with Washington before signing an investment agreement with China, the allies remain determined to fence sit in the U.S.-China technology competition. The group acknowledges that the list of anti-China partners “may include all of the [European Union], though in some cases EU position/member states’ positions are too ambiguous today with respect to China for inclusion in all instances, and members may need to be considered on an individual basis.” But simply stating this position and its EU-splitting ambitions is enough to make clear its absurdity—especially since the EU country most reluctant to cooperate against China is economic kingpin Germany.

None of this is to say that trade with (as opposed to investment in hard assets from) China should be cut off completely, or that international cooperation can be of no use to the United States in its struggle versus the People’s Republic. In particular, (and due largely to recklessly indiscriminate free trade policies), America urgently needs products and know-how now dominated by foreign producers (notably Taiwan’s semiconductor manufacturing industry, and Japanese and Dutch suppliers of key microchip production equipment and materials). And if other countries are willing to cooperate with Washington on various China containing initiatives at acceptable prices, more help is indeed better than less. But the United States will never safeguard its interests adequately unless it recognizes that multilateralism can’t be an end in and of itself. It must also come to realize that against monumental threats, axes are usually more effective than scalpels.

Alan Tonelson is the Founder of RealityChek, a blog on economics and national security, and a columnist for IndustryToday.com. In 2016, he advised both the Donald Trump and Bernie Sanders campaigns on international trade issues.