The UK Election Should Serve as a Warning to Democrats 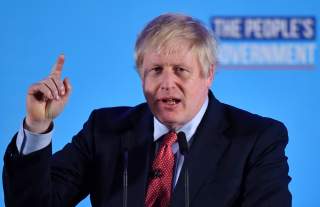 The British general election dealt a devastating blow to the Labour Party. The Conservatives have won the largest majority in Parliament since Margaret Thatcher’s reelection in 1987.

The Conservative prime minister, Boris Johnson, is a controversial figure with a penchant for self-aggrandizement, philandering, and telling flat-out lies. He has reshaped the Conservative Party in his image by purging dissent. He has a history of making racist comments and derogatory remarks about women. He is widely perceived as crude and unfit for office. Despite all that, Johnson appears to have won a substantial number of traditional Labour voters in the middle of the country, those who are largely blue-collar, nationalist, and skeptical of foreigners.

Does any of this sound familiar?

Going into Thursday’s election, Labour was hoping at least to make the election a contest. The polling was rarely in its favor, but the party was going up against an unpopular prime minister pushing an unpopular Brexit plan. What could possibly go wrong?

As it turns out, everything. And the reason is simple: Jeremy Corbyn.

While it is common for those on the Right to brand anyone on the Left a “socialist,” in Corbyn’s case, the label is accurate. Like Vermont Senator Bernie Sanders, Corbyn gleefully calls himself a “democratic socialist” and lives up to the moniker. Among other economic travesties, the Labour Party manifesto called for 10 percent of the equity of large companies to be seized by the government and handed over to employees. Labour also wanted to turn the clock back by renationalizing several British industries.

It gets worse. Corbyn has a long history of being anti-American and anti-West in general. He praises brutal dictators, such as Hugo Chávez and Fidel Castro, as champions of “social justice.” He can’t even bring himself to denounce fellow comrade Nicolás Maduro, who is murdering protesters while bringing utter economic ruin to Venezuela. And to top it all off, he has shown no urgency to quell the growth of anti-Semitism in his party.

When British voters were given a choice—the bloviating Brexiteer or the revolting revolutionary—they went overwhelmingly for the former. It turns out that revulsion is a very potent motivator in politics, driving voters to embrace the devil they know over the devil they don’t. The Brits can envision a post-Brexit future; they cannot envision a post-capitalist one.

Since Prime Minister Gordon Brown lost power in 2010, Labour has been in the political wilderness. Ever so steadily, the party began creeping toward the Left. Ed Miliband took the party away from the grand centrist coalition that had been built under Tony Blair. Labour lost. But pundits knew better: Labour didn’t go far enough to the left. So the party faithful elected Corbyn, who took Labour about as far Left as a party can go in a democracy. The base got exactly what it wanted, yet they got shellacked, as President Barack Obama would say. Democrats in America better take note.

Obama arguably was the most progressive president America has had since Franklin D. Roosevelt. But the current crop of Democratic presidential candidates—save former Vice President Joe Biden—rarely mentions his name. The reason is that, like Labour, the base has moved farther Left in just a few short years. Case-in-point: Obama’s signature healthcare plan, a progressive victory by any measure, no longer satisfies the base. Now, some are calling for private health insurance to be abolished, a radical plan that could upend the economy.

The parallels between British and American politics go even further. Just like Labour, the Democrats have become the party of urban centers, consisting mainly of the well-to-do and intellectual elite, such as those in academia or the media. And just like Conservatives, the Republicans have become the party of rural America, consisting mainly of the working class and those who feel “left behind” by globalization. Twenty years ago, Conservatives and Republicans were the parties of the rich; today, it’s Labour and Democrats.

The lesson from the UK election should be crystal clear to Democrats: They cannot rely on the unpopularity of Donald Trump to deliver them the White House in 2020. To be sure, the Democrats are not nearly as far left as Labour, but still, on a whole litany of issues, the Democratic base has moved considerably outside the American mainstream. The party would be wise to nominate a moderate. Because if given a choice between the devil they know and the devil they don’t, Americans may render a decisive verdict for the former.