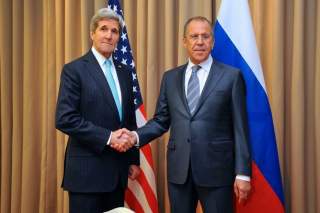 In his interview with Thomas Friedman published on August 8, President Obama gave a convincing explanation of why the United States could not create an effective government in Iraq: “We cannot do for them what they are unwilling to do for themselves,” he pointed out, and also explained, “Societies don’t work if political factions take maximalist positions. And the more diverse the country is, the less it can afford to take maximalist positions.”

The president has identified the central issue, not only in Iraq but also in many of the world’s hotspots. In particular, his perception should be applied to guide our policy toward Ukraine and its conflict with Russia. American policymakers also need to pay closer attention to regional power realities and perceived interests than they apparently have in the recent past.

Neither Russia nor the United States has any right, under what is generally accepted as international law, to be involved in selecting a government in Ukraine. Russia, however, has an infinitely greater stake in that government’s orientation than has the United States and a much greater ability to affect what happens on the ground. The United States has traditionally opposed foreign military alliances in its own backyard—normally defined as the entire Western hemisphere—and in practice reserves the right to take any action it considers necessary to ensure its safety if it perceives a potential threat. One has to have a blind spot to salient features of the real world to expect that any country would be restrained by abstract and frequently violated principles of “international law” if its government believed that it must prevent a hostile foreign power from taking effective control of a neighboring country.

It does not matter that the Russian fear of foreign designs on Ukraine is exaggerated or misplaced (it is certainly exaggerated but perhaps not totally misplaced) because it is the perception that counts, the perception that motivates, the perception that agitates the public. If the United States government wishes to discourage undue Russian economic and military pressure on Ukraine, or Russian support for separatist sentiment in parts of Ukraine, it should do its best to diminish the Russian suspicion that the United States and its European allies are scheming to detach Ukraine from Russia’s sphere of influence and turn that country into a link in a cordon sanitaire to “contain” and eventually subjugate Russia.

Instead, the actions of American officials and administration statements, particularly since the demonstrations on Kiev’s Maidan began, seem designed to intensify Russian suspicions rather than attenuate them. The American assistant secretary of state for European affairs discussed with our ambassador in Kiev, on an easily intercepted cell phone call, possible replacements of the Ukrainian prime minister in terms that suggested that she was making an appointment. (“Yats. He’s the man!”) And indeed, “Yats,” or Arseniy Yatsenyuk, became prime minister after an armed rebellion. His government, which replaced a corrupt but constitutionally elected regime, received instant recognition from the United States, invitations to Washington, and visits not only from American senators but also the American vice president (who, during his 2008 run for the presidency had boasted that he could best “stand up to Vladimir Putin”—whatever that meant), and, of all people, the director of the Central Intelligence Agency.

Now, from my limited understanding of Ukrainian politics, Prime Minister Yatsenyuk is a capable politician free of some of the most glaring faults of his predecessors. Any friend of Ukraine will wish him and President Poroshenko well in their efforts to put that tortured country back together. Nevertheless, we should not ignore the fact that their government is unrepresentative of the country as a whole, and that, so long as extensive fighting continues in the eastern provinces, valid representation of Ukrainian citizens there will be virtually impossible.

Kiev’s Western friends cannot provide political representation from Ukraine’s eastern provinces and Kiev is unlikely to enlist it while fighting goes on in Donetsk and Luhansk. Those who feel that the Kiev government can unify the country by means of a military victory over the separatists are surely wrong. Even in the unlikely event that Russia would permit a complete military victory, the government in Kiev would face the challenge of dealing with festering cancers rather than healthy, functional organs in Ukraine’s body politic.

The Russian government has bolstered its case with its citizens by heavy use of propaganda filled with distorted interpretations, questionable and sometimes false analogies, and occasional fabrications. Coverage of events in Ukraine by prominent American and Western European media, while more accurate and balanced than that in the Russian government-controlled media, has nevertheless devoted little attention to the militant right-wing elements in Ukraine’s Maidan movement, or to Kiev’s use of unofficial armed militias with ties to countries in the West. Even if the Maidan militants in the current government embody the purest virtue (a standard no one can meet), one could hardly expect the Russian government and public to welcome their apparent control of key positions in Kiev’s military and security apparatus given their outspoken hostility to Russia. One need only recall the American reaction during the Cold War to revolutionary movements in Latin America suspected (correctly or not) of being under Communist influence.

We are not in a new cold war, but our political leaders’ public accusations, demands, and threats have helped recreate much of that atmosphere. This acrimonious public dialogue, at times descending to little more than name-calling, has set off destabilizing vibrations that are amplified by feedback at each exchange.

Public challenges that impugn the honesty or probity of other countries’ political leaders, however well founded, can hardly be expected to encourage the targeted leader to accept demands. In fact, they normally stimulate a defiant posture to show the leader’s own people who is boss in the area. When that leader has control of the country’s information media, it is not difficult to convince the great majority of citizens that his actions are necessary to preserve the security and honor of the country.

The spate of official name-calling seems to be abating, and that is encouraging, for only quiet, realistic diplomacy is going to steer the warring parties in Ukraine away from the disastrous course they have chosen. The Ukrainians must understand that they cannot achieve the unity any successful nation-state requires by imposing the will of one part of the country on the rest. The Russians must be convinced that ending support for the rebellion in eastern Ukraine is in their interest and is not a precursor to a NATO-dominated Ukraine. The EU needs to understand that, no matter how well intended its arrangements with the government in Kiev may be, success is impossible unless Ukraine can create a genuine degree of national unity.

Settlement on any terms while fighting continues seems most unlikely, so efforts to stop the fighting and meet the humanitarian needs of the people trapped in combat zones must take priority. Nevertheless, active negotiations to reach an overall settlement must proceed in order to improve the prospects for a cease-fire and the durability of one, if reached. The principles on which the civil war in Ukraine could be brought to an end and a government established that can provide effective rule for the entire country (minus, at least temporarily, Crimea) are well known to those familiar with the area and not blinded by partisan passions. They are, speaking broadly: (1) a commitment, embedded in the constitution, by Ukrainian political leaders to power-sharing that prevents the domination of one section of the country by the other; (2) a federal structure in function if not necessarily in name; (3) acceptance of Russian as an official language along with Ukrainian in regions with a significant number of Russian speakers—ideally in the entire country; and (4) a credible assurance that Ukraine will not become a member of a military alliance hostile to Russia, perhaps by requiring the vote of a supermajority as a prerequisite to joining any military alliance.

An agreement among Ukrainians along these lines should be strongly encouraged by outside parties. It could be reached without necessarily agreeing on the status of Crimea, a question that could remain in legal limbo, subject to further negotiation between Ukraine and Russia in, one would hope, calmer times. It might eventually be possible to provide some face-saving for both Ukraine and Russia by agreeing to an OSCE-sponsored referendum in Crimea following a specified period of Russian administration.

The planned meetings this week of Russian and Ukrainian representatives with European and, in some instances, American diplomats provide opportunities to nudge the warring parties to end the violence and to negotiate their differences. Given the mounting security challenges elsewhere, which are as threatening to Russia as to the United States and the countries of the European Union, all the external powers have a stake in the ability of the Ukrainians to forge a national consensus. It is time to end the feckless imitation of Cold War tactics and concentrate on ways to help the Ukrainians do for themselves what only they can do.