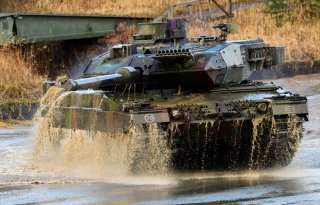 Ukraine is paying the price for its defiance of Moscow. Encouraged by the West since the 2008 Orange Revolution, Kyiv pursued engagement with the European Union and NATO. For more than a decade, it refused to negotiate neutrality or a closer relationship with Moscow. Despite repeated Russian threats and “redlines,” Kyiv stood up to Vladimir Putin. That resistance ultimately resulted in the loss of Crimea; a civil war fomented by Moscow in Donbass; and now, finally, open war with Russia. Western democracies encouraged Ukraine to take this Quixotic approach, even as they made clear that Ukraine had no near-term chance of joining NATO. The bottom line is that the Ukrainians were left to fend for themselves. Despite that, it is possible that Ukraine, with NATO-supplied equipment, will now pull off the impossible: slowing Russia’s invasion into a military stalemate.

The terms under which President Volodymyr Zelenskyy and Russia might end hostilities will be mainly up to the warring partners. Following the Russian invasion, Ukraine did back off its position on neutrality. Notwithstanding Ukraine’s constitution calling for NATO membership, Zelenskyy raised Ukraine’s alignment as an issue for possible negotiation just three days after the Russians attacked.

Negotiating neutrality will be difficult. Both Zelenskyy and Putin will likely call for realpolitik commitments from Washington and NATO that would legally guarantee Ukraine’s neutral status, possibly similar to the Austrian State Treaty of 1955. The United States was a ratifying party to the Austrian neutrality agreement, along with France and the United Kingdom. Having watched the United States back out of the Iranian nuclear deal, Moscow might insist that Washington and NATO guarantee Ukrainian neutrality by treaty rather than a less binding legal commitment such as an executive agreement. Moving a treaty through the U.S. Senate would be difficult, recalling President Woodrow Wilson’s unsuccessful struggle to persuade the U.S. Senate to approve the Treaty of Versailles. The State Department will likely have to search for an alternative solution satisfactory both to Moscow and Kyiv short of a formal treaty.

Devising a neutrality formula for Ukraine and Russia will be just the beginning of Washington’s diplomatic hurdles. Putin will no doubt try to obtain the termination of Western sanctions as another requirement for ending hostilities. Walking back sanctions will be opposed by global liberals who stress the responsibility of the United States to support “free peoples.” They will find it hard to accept not punishing Russia for invading Ukraine, and for its military occupation of Crimea and Donbass, even if Ukraine ultimately accepts those occupations to end the fighting. Globalists will want to see Russia punished just as the victors at Versailles wanted Germany to pay for its sins. Finding a peace formula for Ukraine will border on the impossible if the West is unwilling to accept a solution that leaves neither side humiliated. The negotiating process is likely to be drawn out and the war will remain stalemated. It is possible that Washington sees that as an acceptable scenario in the hope that this could bleed both the Russian state and Putin’s hold on power.

While Ukraine has been torn apart, Russia’s invasion is causing a balance of power shift that will produce strategic benefits not only for Europe but for global security. Russia’s folly in Ukraine has awakened America’s European allies. NATO countries are beginning the process of upgrading their militaries so that they can better defend against Russian aggression short of nuclear war. The Europeans can accomplish this. The Russian military in Ukraine has revealed that it is not the juggernaut that the West had feared. The aggregate GDP of NATO European allies is roughly $20.4 trillion, almost equal to that of the United States. Russia’s GDP is just $1.5 trillion. Russia has a declining populace of 146 million compared to an increasing population of about 600 million for European democracies. Great Britain, France, and Germany, along with twenty-six other European allies, should be able to counter any foolhardy Russian attempt to invade a NATO country. European Union members alone already have a combined strength of approximately 1.26 million troops, compared to what was 900,000 active-duty Russian troops before the invasion of Ukraine.

A top foreign policy priority for the United States must be to work on a multi-year plan to shift the bulk of responsibility for European defense leadership to allies. Gradually reducing the U.S. military footprint in Europe will not mark a return to American isolationism. A strategic readjustment of military resources will instead enable the United States to redeploy its over-stretched forces to meet other global challenges. A reorganization of military responsibilities and resources among democracies in Europe is long overdue.

To bring about this change, the biggest hurdle might ironically be not so much European opposition as the mindset in Washington. Over the last seventy-five years, almost a century, U.S. national security policy has been glued to the principle that the United States must exercise global military leadership to safeguard democracy. As Europe looks at alternatives for building up a more effective fighting force, U.S. diplomats and the Pentagon must accept its historical inevitability. Whether under the NATO framework or in tandem with other alternatives, such as the European Defense Force, Strategic Compass initiative that was recently approved by EU defense ministers, the goal must be to support European allies in finding the right formula for their own security. Ukraine is fighting a total war over its determination to follow a path independent of Russian domination. A strategic result of Russia’s invasion must be that European democracies shed an anachronistic, Cold War structure that has been centered far too long on an over-extended, American shield.