Ukraine Just Got a New PM. What It Needs Is Reform. 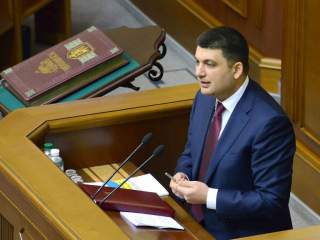 The resignation on Sunday of Arseniy Yatsenyuk, the man who became Ukraine’s “kamikaze” prime minister in the aftermath of the 2014 Maidan Revolution, created an immediate power vacuum in Kyiv. But that vacuum was filled predictably quickly with the parliament’s approval of Volodymyr Groysman as the new prime minister Thursday. In the quarter century since Ukraine’s post-Soviet independence, a revolving clique of no more than a few dozen top figures has occupied key political posts, notwithstanding two popular revolutions, a swinging pendulum of privilege among the country’s major industrial clans, and constant geopolitical ping-pong between East and West.

Groysman most recently served as chairman of the Verkhovna Rada since 2014, and is a loyalist to President Petro Poroshenko, one of Ukraine’s wealthiest businessmen. From 2006 to 2014, Groysman served as mayor of Vinnytsia, where he was known for running a reasonably clean administration and even implementing transparency-oriented reforms in local government services. During his time in the Rada, he has shepherded through two major legislative reform packages, but has been hamstrung by a fractious governing coalition and pressed on all sides by competing oligarchic interests.

The much harder but ultimately more important issue is what the new prime minister must do to get Ukraine back on track. The economy has suffered double-digit declines since the Maidan Revolution and the Russian invasion in 2014, with unemployment well over 10 percent. Ordinary Ukrainian households watch as their wages and pensions decline, while prices climb for everything from heating fuel to imported goods.

Without the lifeline of a $40 billion bailout package from the IMF and Western governments, Ukraine would be unable to cover its budget expenditures and would default on its debts, sparking a panic and further economic collapse. The price of this Western assistance is Ukraine’s progress on an anticorruption reform path, to which President Poroshenko and his political allies are publicly committed, but on which there has been disappointingly little progress in the past two years.

Successful reform begins with robust, consistent and transparent rule of law, which in turn depends on effective courts, prosecutors and police. So far, Ukraine has gussied up its police force with a few thousand new recruits, trained by U.S., Canadian and European counterparts, and equipped with shiny new Toyota Prius squad cars, donated by Japan. But the overwhelming majority of Ukrainian police still practice the old ways, including extortion and collusion with powerful local business and political interests.

Reform in Ukraine’s courts is also bogged down by the sheer scale of the problem. From the country’s three top bodies for hearing constitutional, civil and general jurisdiction appeals, down to local district and city courts, Ukraine’s nearly ten thousand judges are simply too close to their patrons in business and the political branches of government. Firing corrupt judges would be an obvious good start, but Ukraine does not have thousands of qualified candidates waiting to pick up their caseload, even if President Poroshenko could be trusted to appoint them.

The most prominent test case for Ukraine’s rule-of-law reforms has been the drama around the prosecutor general’s office. Since Soviet times, prosecutors have had near-unchecked authority to intervene in court cases or to launch criminal proceedings, which they have used to amass huge fortunes. The most recent occupant of the office, Poroshenko ally Viktor Shokin, was finally fired last month for glaring abuse of office and corruption. Yet young reformers like Vitaly Kasko and David Sakvarelidze, brought into the prosecutor’s office after the Maidan Revolution to clean house, have also been booted, and the powerful institution remains under the control of Poroshenko’s political loyalists and cynical timeservers from the Yanukovych era.

Without visionary leadership and good governance at the top, it is impossible to implement reforms throughout Ukraine’s vast and complex bureaucracy. But where does such leadership come from, in a system where everyone assumes that political power is a vehicle for enrichment and protection of privilege? To Ukrainians expecting to finally see tangible positive results more than two years after the Maidan Revolution, and to Ukraine’s grumbling creditors and allies in the West, this is becoming a frustratingly circular problem.