Ukraine and Latvia: Welcome to "The Clash of Civilizations" 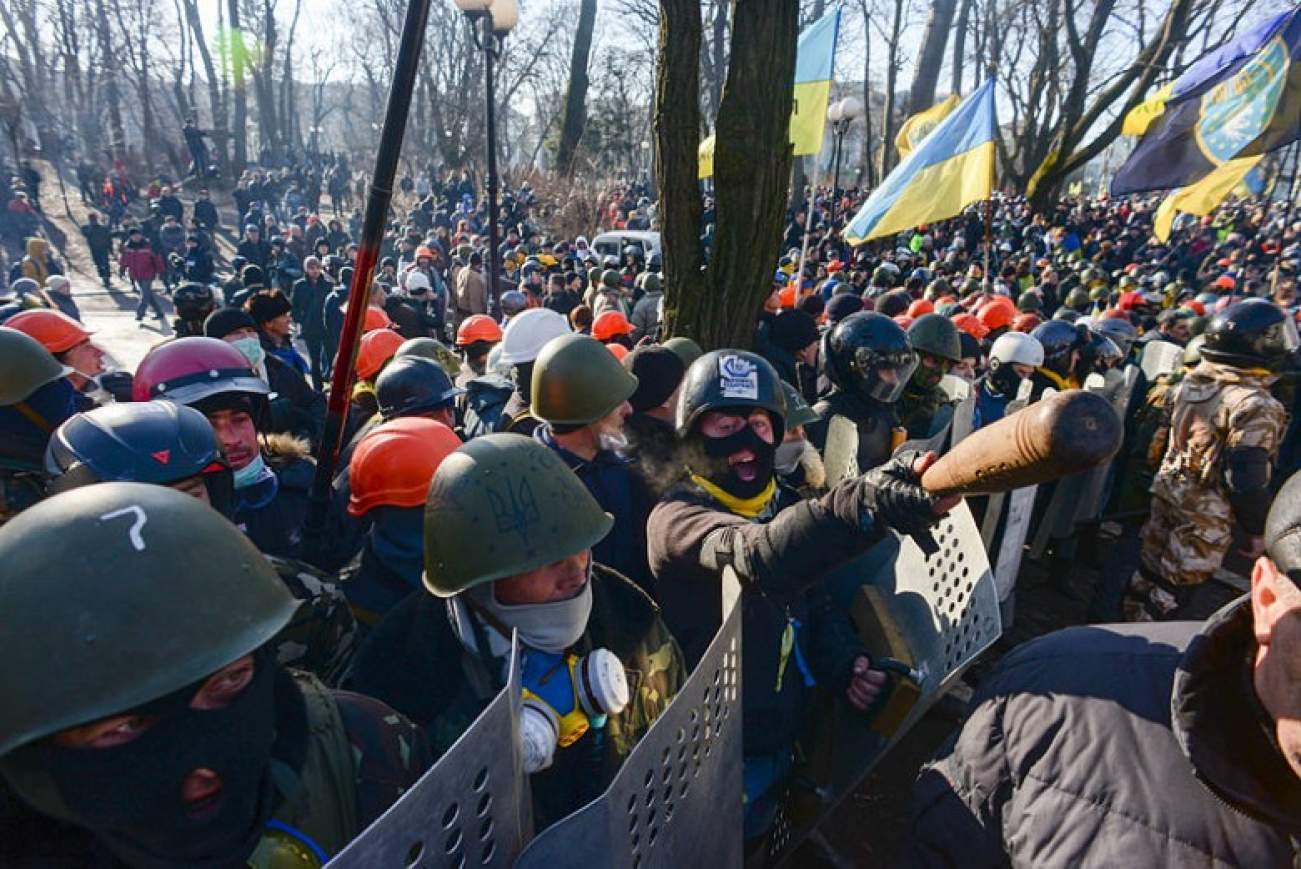 Ukraine and Latvia. One is large and located down on the Black Sea; the other is small and situated up on the Baltic Sea. But both sit upon the Russian border, and both encompass internal cultural conflicts that put them in play amid the current tensions between the West and Russia. Major lessons can be drawn from what they have in common and what distinguishes them. The biggest lesson is that culture matters—and culture tied to any nation’s fundamental strategic interests represents a force that shouldn’t be trifled with.

Realists who have advocated a cautious and measured approach to NATO expansion and, more recently, to events in Ukraine, have been attacked by neoconservatives and Wilsonian liberals as weak agents of appeasement. But these neocons and Wilsonians are dangerous, because they ignore distinctions based on culture. Indeed, they generally dismiss culture as irrelevant, except the Western culture, which they wish to spread throughout the world. That is the outlook that has generated so much havoc since the end of the Cold War, in Iraq, Afghanistan, Libya, Egypt, Syria—and now in the border regions of Europe, where the dangers are much more ominous.

Hence, it isn’t surprising that neocon and Wilsonian commentators and officials can’t see a distinction between Ukraine and Latvia. In their view, both should be bathed in the glow of Western attitudes and Western institutions. Yet, an analysis of the two nations’ history and cultural currents can lead to an understanding of the geopolitical realities along the fault line between the West and Russia and the proper approach to U.S. foreign policy in the region. Let’s begin with Ukraine.

When the United States and the European Union adopted a policy of NATO expansion, without regard to cultural boundaries (the so-called Open Door policy), it set in motion a confrontation between the U.S.-led West and the Russian-led Orthodox civilization. Particularly combustible was Ukraine, a nation that is split down the middle between a Western half (nationalist in outlook, oriented toward the West and toward the Uniate Church, which practices Orthodox rites but acknowledges the authority of the Pope) and an Orthodox half (adherents of Eastern Christianity and oriented toward Russia). This is a nation with two separate cultures, two religions, two heritage concepts. As such it is intrinsically a flash point nation, as we’re seeing in the current crisis.

By way of illustration, consider the vote totals in the 1994 presidential election between Leonid Kravchuk, who identified himself as a nationalist, and Leonid Kuchma, a product of eastern Ukraine. Kuchma carried the eastern provinces with vote totals as high as 88 percent in Luhansk, 90 percent in Crimea and 79 percent in Donetsk (scene of much of the recent violence). Meanwhile, Kravchuk carried the western provinces with similar vote totals—84 percent in Volyn, 93 percent in Lviv, 95 percent in Ternopil. When Kuchma won with 52 percent of the vote, American foreign policy expert Ian Brzezinski said the election “reflected, even crystallized, the split between Europeanized Slavs in western Ukraine and the Russo-Slav vision of what Ukraine should be. It’s not ethnic polarization so much as different cultures.”

Hence, Ukraine is what the late Harvard political scientist Samuel P. Huntington called a “cleft country,” where large groups belong to different civilizations. Cultural tensions inevitably arise in cleft countries, Huntington noted, “when a majority group belonging to one civilization attempts to define the state as its political instrument and to make its language, religion, and symbols those of the state.” This is particularly true when two groups are largely equal in population and influence, as in Ukraine. When America and the West sought to foster Western dominance of Ukraine, it was sure to set off Russia-oriented peoples in the eastern part of the country.

But Ukraine is also crucial to the strategic interest of Russia, which has maintained it as part of Russia’s sphere of influence since the mid-seventeenth century. For one thing, Russia has few natural protective barriers and hence feels a need to control territory in order to be secure, particularly from the West, whence came devastating military invasions in each of the last two centuries. Beyond that, Ukraine represents a fundamental element of Russia’s national identity. Without Ukraine, Russia lacks even a pretense of being a serious European power; with Ukraine, it retains the continental leverage it has enjoyed since Peter the Great. And of course Crimea, part of Russia for centuries before being attached to Ukraine arbitrarily during the Soviet era, represents a crucial piece of strategic territory for Russia, given its pivotal Black Sea position.

As Huntington pointed out, “Cleft countries that territorially bestride the fault lines between civilizations face particular problems maintaining their unity.” That describes Ukraine precisely. It is a tragically split nation facing both ways in frontier territory between the Western and Orthodox civilizations. It was never going to be easy maintaining an equilibrium in that country, but it would have been best if that effort had been carried out under Russian auspices, given Ukraine’s large Orthodox population and its centuries-long position within Russia’s sphere of interest. It was inevitable that the effort would be marked from time to time by corruption and violence, as indeed it has been, but those things are endemic in the region and ultimately the Ukrainians must make their way through their own tragic circumstances.

That’s why Western meddling in the country was so unfortunate. The United States has spent a reported $5 billion in “democracy promotion” in Ukraine, designed to leverage the Western-leaning populations to lure the country away from Russian influence. In concert with Europe, it dangled the idea of Ukraine’s inclusion in NATO, an incendiary concept to Russian sensibilities and Russian interests. When Russia responded as any nation would (including the United States), moving to protects its vital strategic interests in its immediate neighborhood, the neocons and Wilsonians waxed bellicose, as if the problem was Russian aggression and the solution was for America to employ “get tough” policies.

Leaving aside the unnecessary tensions this unleashed in U.S.-Russian relations, the American—and Western—approach quickly destabilized the delicate cultural balance within Ukraine, leading to civil unrest that could be long-term and bloody and which could leave the region destabilized for years. Culture matters, which is why great nations should seek to avoid stirring up cultural passions whenever possible.

In the Middle East, we saw just how contagious stirring up passions can be. Now we are seeing how contagious it can be along the Western-Russian fault line—which brings us to Latvia.

Like Ukraine, Latvia is a cleft country, with ethnic Russians making up nearly 30 percent of the population and the Russian language being the native tongue for nearly 40 percent. Latvian leaders, seeing increasingly violent Russian-separatist agitation in eastern Ukraine, fear similar uprisings in their country, and they are right to be worried. According to a recent Wall Street Journal article on the subject, many municipal leaders harbor strong pro-Russian sentiments, and “provocateurs” seem to be spreading an antigovernment message, “on behalf of the Kremlin,” in anticipation of parliamentary elections in the fall.

Thus, the cleft-country realities of Latvia are similar to those of Ukraine. And no doubt Russia, which dominated the Baltic States from the beginning of World War II to the end of the Cold War, would like to bring those nations once more under its dominion. But there is a big difference between Latvia and Ukraine. While the latter has been part of the Russian sphere of influence for centuries, the former is by temperament, ethnicity, religion, culture and history a predominantly Western nation. The primary religion among Latvians is Lutheran, except for the southeastern region, which is largely Catholic. It has been part of the West for centuries, except during periods when it was dominated from the east by force of arms.

The West has a huge interest and a big stake in ensuring that Latvia remains within the Western sphere of influence, and so it is entirely appropriate that it should be part of NATO, which means the West is committed to protecting its independence. Like Ukraine, Latvia must grapple with the cultural complications stemming from its cleft-country reality and the cultural sensibilities of its Russian minority. But it must be allowed to deal with those matters under Western auspices, unimpeded by Russian interference, just as Ukraine should be left alone to deal with its similar complications without Western meddling.

What a shame it is, then, that the West has stirred up cultural animosities not only within Ukraine but also potentially in other cleft countries along the Russian border. What a shame that America is fostering increasingly severe economic sanctions against Russia when it should be applying creative diplomacy to adjudicate this delicate borderland situation. What a shame that U.S. relations with Russia are deteriorating to a possible breaking point when the real long-term adversary is China. And when that competition heats up, America will need all the allies it can get, particularly those positioned to pressure the Chinese. What a shame that Western policy makers can’t seem to incorporate into their thinking such fundamental concepts as balance of power, spheres of influence and buffer zones—all crucial elements of diplomacy for nations interested in fostering stability and peace.

It may be too late now, not only to rescue Ukraine from what appears to be a looming civil war, but also to save Latvia from similar cultural tensions. This is a Western mess, and it may require a great deal of time, effort and exertion for the West to clean it up.