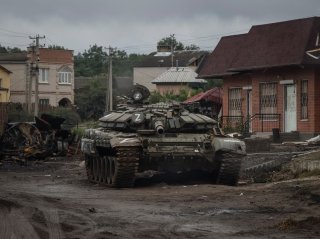 Last Thursday, the Biden administration announced a $600 million arms package to Ukraine, including 1,000 “precision-guided” artillery shells. Unfortunately, a backlash has been growing in the Republican Party to aiding Ukraine. In each successive aid package since the war began, the number of GOP lawmakers supporting aid to Ukraine has declined. Rep. Roger Williams told DefenseNews, “We can’t continue to send all of our assets to Ukraine. A lot of what we’ve sent to Ukraine should be down at the border.”

Washington is providing enough weapons for Kyiv to survive but not enough for a rapid victory over Moscow that will create the conditions for a lasting peace in the region. This overly cautious approach means that the war may devolve into a protracted and bloody stalemate, leading eventually to negotiations that favor Moscow—the original aggressor.

How wrong the West was.

Supplying Ukraine with the weapons it needs and helping it meet its $5 billion monthly budget shortage to keep its state functional needs to be a top U.S. priority.

Ukraine is not Afghanistan, and its banking, rail, and energy systems remain intact. In fact, Ukraine’s state railways could more than give Amtrak a run for its money. Over the past six months, Ukrainian railways have evacuated millions of Ukrainians, and many of their journeys still arrive on time despite missile strikes. The railways rapidly repair any damaged tracks.

Nor is this all. Kyiv pays its teachers, doctors, and state workers on time. Kyiv itself has returned to normal—restaurants have reopened, schools with bomb shelters hold in-person lessons, and approximately 80 percent of its residents have returned. A curfew remains in place, but Kyiv’s notorious congested traffic has returned with a vengeance.

Ukraine may be 5,000 miles away, but Americans instinctively understand why the fight matters and why they should help pay for it. A majority of Americans want to support Ukraine “as long as it takes,” according to polling from the Chicago Council on Global Affairs.

Supporting Ukraine is the right thing to do morally. Russia is waging a flagitious war to destroy the Ukrainian nation. Russian army forces are intentionally destroying non-military targets, including homes, schools, and critical infrastructure. Bereft of success on the battlefield, it has increasingly resorted to punitive missile strikes.

It’s time to step up our support. Ukraine has unleashed a series of counterattacks, leaving the Russian military stunned and in retreat. In less than a week, Kyiv retook territory that is double the size of the greater London area. Ukrainian armed forces pushed Russian forces out of Kharkiv oblast in the north and recaptured a key logistics hub that Moscow had used to strike Ukraine’s east and an important railway hub that had supplied Russian forces in the east. Most recently, Ukraine has crossed the Oksil River in the Kharkiv region, in preparation for attacking Russian forces in the Donbas region.

While lawmakers such as Sen. Josh Hawley condemn aid to Ukraine, Senate minority leader Mitch McConnell has it right: “The Ukrainians need more of the weapons we’ve been giving them. They need to start getting them faster and they also need new capabilities like long-range ATACMS, larger drones, and tanks. Not all of these weapons need to come from America. Make no mistake, our allies are looking to us for signals.”

Ukraine’s recent victories signal a turning point in the war, if Kyiv can hold the territory, and keep recapturing more of its land in the east and south. Make no mistake about it: retaking the large swaths that Russia still holds in Ukraine will not be easy, but the only way to enable a Ukrainian victory is by sending more weapons and economic support, not less.