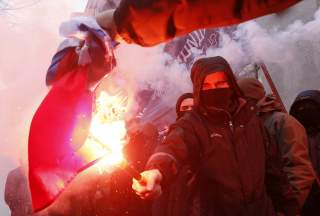 Five years after the annexation of Crimea, one senses deep frustration throughout the Ukrainian capital of Kyiv. From taxi drivers to government officials, people are anxious to know who will win the forthcoming presidential race, and what the next move of their unpredictable and frightening neighbor, Russia, will be. But most of all, as I learned on a recent visit, they are frustrated because the outside world doesn’t seem to understand the pivotal role that Ukraine—if it can retain its democracy—will play in determining the winner of what has already become a new Cold War.

The Kremlin’s prominent ideologist, Vladislav Surkov, recently stated that Russia has returned to “its natural and the only possible state of a great, expanding, and lands-gathering union of nations.” But if Ukraine succeeds in creating a viable, inclusive, and well-functioning democratic state, Russia will stop expanding and likely fall apart, just as the Soviet Union did in 1991. The reason is straightforward: if the Russian people witness the creation of a successful Slavic nation in a country which many of them view as part of Russia, then they will question the effectiveness and legitimacy of their own political system. Ironically, the fact that the Kremlin reinforces the definition of Russia by Aleksandr Solzhenitsyn, who believed that Ukraine was part of Russia, may backfire. If Ukraine succeeds, then why can’t Russia do the same? According to Putin, are Russians and Ukrainians not the same people?

Taking this into consideration, the West, or whatever is left of the West, needs to help Ukraine, not by encouraging Ukrainians to bring back the Donbass and Crimea by means of war, but through a broad spectrum of economic and political measures. Under the Kremlin’s current regime, there is no military solution. The military help should be limited to countering any further attempts by Russia to deepen its territorial gains in Ukraine. Assistance in the strengthening of the Ukrainian army and supplies of lethal weapons are certainly helpful.

Yet more importantly, the United States and its closest European allies need to come up with a Ukrainian version of a Marshall Plan. This means that for the time being Ukraine should forget about the Donbass and Crimea. One could even build a Soviet-type border around the annexed territories, and instead focus on Ukraine’s internal issues: good governance, ethno-linguistic inclusiveness, and, most importantly, corruption. The lost territories will return to Ukraine after Russia’s next and final downfall.

War is a crucial factor in shaping national identity. The overwhelming majority of the Russian-speaking Ukrainians made their unequivocal choice in 2014. They have become loyal and patriotic Ukrainian citizens, who see the Russian state as a blatant aggressor. The Kremlin consolidated the Ukrainian nation, setting it on the way of creating a national identity, which is not ethnically or linguistically circumscribed. If it succeeds in this endeavor, then Ukraine will become the first state in the former USSR, where all of its ethnic minorities are considered equal citizens with a common national name—an accomplishment that Russia has not achieved, either under the Czars, the Bolsheviks, or the present regime.

The word “russki” has an ethnic connotation. It does not include Russia’s multiple nationalities. The word “rossiisky” (belonging to Russia, of Russia), imposed by the Kremlin on the population through legislation, has no chance of becoming a common denominator of identity: the degree of racism and intolerance coupled with the deep grievances of ethnic minorities in Russia will prevent this from happening. Meanwhile, the word “Ukrainian” is becoming a national name for all of the Ukrainian citizens. If Baku-born Armenian Arsen Avakov, who currently serves as Minister of Ukraine’s Internal Affairs yet barely speaks the Ukrainian language, can call himself a Ukrainian, then members of Russian-, Tatar-, Moldovan- and Hungarian-speaking minorities should certainly be able to do the same.

The United States should help in the spreading of the Ukrainian narrative. For example, Congress could assist Kyiv in creating a well-funded media outlet that would broadcast on Russia in the Russian language—a Russian-speaking Voice of Ukraine. The Kremlin, undoubtedly, will try to block it, yet this would only increase its audience throughout Russia—just like in the good-old Soviet days, when, late at night, hiding from their children, people all over the USSR were tuning their radios to The Voice of America. Aside from conveying the Ukrainian story, The Voice of Ukraine could expose the frightening aspects of Putin’s regime. Its target audiences could be Russia’s most volatile and potentially separatist regions: Siberia, the Urals, Tatarstan, Chuvashia, Tuva, the Northern Caucasus, and even Saint Petersburg—the former capital of the Russian Empire, which has had its own separatist movement.

Vladislav Surkov has predicted that Russia will exist in geopolitical solitude for the next hundred, two hundred, or even three hundred years, but it is much more likely that the old-new Russian Empire will cease to exist much sooner. The main reason for this is that Russia’s shared national identity does not encompass its entire population. Thanks to the Soviet administrative reforms based on Lenin’s principles of ethnic self-determination, some of these citizens have their own republics: Chechnya, Bashkortostan, Tatarstan, Sakha, Buryatia, etc. Given an opportunity, they all will seek independence. Furthermore, under free elections, even ethnic Russians would spur separatist movements. As historical examples show, Siberia, the Far East, the Urals, and Kuban would be quick to follow this path. In the 1860s, Siberians even based their independence movement on the example of the American Revolution, calling on Americans for help.

At first glance, the potential disintegration of Russia seems unlikely and frightening. If the largest country in the world with a huge arsenal of nuclear, biological, and chemical weapons crumbles into pieces, one could, indeed, foresee the coming of Armageddon. Even when the USSR was falling apart, the U.S. government was concerned about the fate of Soviet nuclear technology, which was distributed at that time between Russia, Belarus, Ukraine, and Kazakhstan. In 1991, in a speech popularly known as “Chicken Kyiv,” George H. W. Bush warned against radical nationalism in the Soviet Republics, essentially advocating for the preservation of the Soviet Union in a smaller, less-threatening format.

As history has demonstrated, Bush’s words were both naïve and miscalculating. The Soviet Union ceased to exist in the same year, and several post–Soviet republics started on a path of nationalist dictatorships. The question of whether Russia will proceed similarly depends largely on the success of the Ukrainian experiment. If Ukraine manages to create an inclusive and well-functioning state in what used to be one of the spiritual centers of the Russian Empire, then it would set up a superb example for Russia.

If Russia’s downfall replicates the ethnic republics created by the Bolsheviks, then the world may, in fact, witness a kind of Armageddon, expressed through a series of vicious, nationalistic wars waged for the legacy of the Russian Empire. Yet if Russia disintegrates along both regional and ethnic boundaries, then the outcome could be beneficial to everyone involved. The world may see the emergence of several prosperous, inclusive, and cooperative states in Eurasia.

Today, fighting endemic corruption is the single most important element in Ukraine’s path to a better future. Upon the agreement with the Ukrainian government, the United States needs to expand substantially its cooperation with Ukraine’s National Anti-Corruption Bureau, an organization created with the help of the U.S. State Department. One can understand the frustration of the U.S. officials when in September of 2017 the office of Ukraine’s attorney general Yuri Lutsenko wanted to prosecute the head of the Anti-Corruption Bureau, Artem Sytnik. “Recent events—including the disruption of a high-level corruption investigation, the arrest of officials from the National Anti-Corruption Bureau of Ukraine (NABU), and the seizure of sensitive NABU files—raise concerns about Ukraine’s commitment to fighting corruption,” said Heather Nauert, the spokeswoman for the State Department, on December 4, 2017. The words of the former Secretary of State Rex Tillerson were harsher. “It serves no purpose for Ukraine to fight for its body in Donbass, if it loses its soul to corruption,” said Tillerson.

Ukraine does not need help a la Paul Manafort. Instead, it needs a robust political and economic cooperation, including major foreign investments. Along with Poland and the Baltic States, Ukraine remains one of the few countries that still looks upon the United States with gratitude, admiration, and expectations for cooperation.

After a largely failed humanitarian interventionism in the Middle East, we cannot lose this opportunity. Helping to build an economically successful and ethnically inclusive Ukraine is a way to win this new cold war. A joint U.S.-Ukraine victory would pave a better future for all the peoples of Eurasia, including the Russians.