Ukraine Is NOT Munich 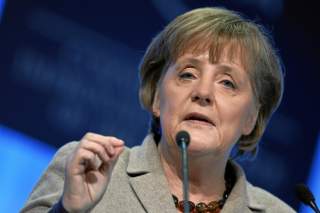 Bret Stephens of the Wall Street Journal directed his characteristic vitriol against German chancellor Angela Merkel last week. No surprise there, since Stephens wants the United States to enter just about any battlefield that’s raging just about anywhere in the world, while Ms. Merkel had decided against sending lethal defensive weaponry to the Ukrainian government to fight Russian-backed separatists making considerable military headway against the government.

Nor is there any surprise in the historical analogy Stephens employed in seeking to demonstrate just how craven Ms. Merkel is in her reluctance to get directly involved in a regional dispute in territory that has been part of the Russian sphere of influence for the past three and a half centuries. The analogy—“unflattering as it is,” he says—is Munich. Ms. Merkel is branded—horrors, horrors—an appeaser, like that hapless appeaser of historic opprobrium, Neville Chamberlain.

The Munich analogy is so overworked and clichéd by now that one would think that even Stephens might move on to something more vivid and telling. After all, as Yale’s Paul Kennedy pointed out in a penetrating National Interest article in 2010, the appeasement epithet has been used to bludgeon the kinds of foreign-policy ideas and approaches that, in history, have contributed significantly to peace and stability. Consider, he says, Britain’s actions near the end of the nineteenth century of accepting American intrusion into areas that previously had been under clear British influence, along the Venezuelan-British Guiana border, for example; involving America’s desire to dominate a Central American canal; and in the matter of the Alaskan-Canadian border. All this was appeasement, but was it really bad for Britain or the world? Nineteenth-century European diplomacy was riddled with the kinds of negotiated settlements that now kick up inevitable tirades against appeasement. But it contributed to a largely peaceful century on the continent.

As for Britain in the 1930s, a tale that created the sump of sentiment that now sees appeasement whenever American leaders opt out of a military strategy, Kennedy notes just how closely the American situation of today parallels that of interwar Britain:

Here was and is the world’s hegemon, with commitments all over the globe but also with pressing financial and social needs at home, with armed forces being worn out by continuous combat, with an array of evolving types of enemies, yet also facing recognizable and expanding newer nations bearing lots of increasingly sophisticated weaponry. So what do you do: Appease, or not appease? Appease here, but not there? Declare some parts of the globe no longer of vital interest?

It might be a time for America to inject some priority thinking into foreign policy, which is what Britain did during that challenging decade of the 1930s. Of course, as Kennedy notes, there come times when you have to stand and fight, as Britain ultimately did. “After the German attack on Poland,” he writes, “appeasement vanished. And rightly so.”

The problem with the appeasement epithet is that it is seen by so many as such a “gotcha” weapon that it ultimately breeds sloppy analysis. The Stephens piece is an excellent case in point.

When Merkel invoked the 1961 Berlin crisis as a lesson in foreign-policy patience, for example, Stephens declares it “the wrong analogy” because the “Soviet Union wasn’t trying to overturn the status quo when it built the Wall; it was trying to salvage it. Territory wasn’t seized. And the West did, in fact, deploy its tanks to Checkpoint Charlie to make sure the Soviets didn’t take another step.” He seems to be saying that because the status quo wasn’t threatened, the lack of Western action to reverse the Soviet action didn’t really constitute appeasement. But the Soviets had seized territory beforehand, had enslaved millions throughout Eastern Europe and East Germany, and the Berlin Wall was a stark symbol of a status quo to which the West had declared itself utterly opposed.

Hence, John Kennedy’s decision to let it go did in fact constitute appeasement—and was absolutely the right decision, however tragic for those poor souls caught behind the Iron Curtain. As Stephens quotes Kennedy as saying, “a wall is a hell of a lot better than a war.” In that instance, he was right.

But what about the Ukrainian situation? Merkel says she can’t see how the Ukrainian government can successfully stand up to the Ukrainian rebels, backed up with Russian assistance. And, if the West involves itself militarily, the result will simply be an escalation, because Russia will never let Ukraine slip from its sphere of influence, no matter what the price, whereas the West doesn’t have an interest there sufficient to justify the kind of price the Russians will pay.

Stephens writes that “it’s a good thing Franklin Roosevelt took a different view of Britain’s military chances during the Lend-Lease debate of 1941. Or that Harry Truman didn’t give up on West Berlin during the Soviet blockade of 1948.”

So let’s look at those two instances and compare them to today’s decision on sending lethal weapons to Ukraine. First, the Lend-Lease debate: Germany had overrun nearly all of Europe and harbored designs on Britain. Europe was the cradle of Western civilization, and America was a Western nation. How could the questions unleashed by the Nazi war machine after the European conquest possibly compare with what Russia does within its own sphere of influence in a neighboring nation tragically split between the West and the Orthodox East?

Further, when Stephens notes that the Soviets weren’t trying to upend the status quo at the time of the Berlin Wall, he may want to ponder who is trying to upend the status quo in Ukraine. Is it the West, which wants to pull Ukraine away from the Russian sphere of influence after 350 years of Russian dominance there? Or Russia, which wants to maintain its old status vis-à-vis its neighbor?

As for Stephens’ analogy concerning the Soviet blockade of Berlin, it’s worth noting that Europe at that time was threatened by 1.3 million Soviet and East-bloc troops parked on the doorstep of what was left of Europe after the USSR’s postwar land grab. Do such facts mean nothing to Stephens as he tosses around his analogies for polemical effect? Truman’s decision to initiate the Berlin airlift was truly heroic, given that few thought it would work and most of his advisers considered Berlin a lost cause. It’s a grand story of American foreign policy at a time of a perilous threat to the West, and it’s nice that Stephens appreciates it, but to suggest that that presidential decision serves as lodestar for Western leaders today grappling with the fate of Ukraine is ludicrous. Not only is the West not threatened, one way or the other, by what happens in Ukraine, but the crisis there stems from the West’s own efforts to alter the Ukrainian-Russian relationship in ways that no Russian leader can countenance. A cursory survey of Russian history, beset by numerous invasions right through the territory that is now Ukraine, would convey the reason.

And so there is only one truly sensible approach, which is the Merkel approach, and that is to seek a negotiated outcome with Russian president Vladimir Putin. It will have to designate Ukraine as a nonaligned buffer nation between the European Union and Russia, with strong grants of autonomy to the ethnically Russian and Russian-speaking Ukrainians of the eastern portion of the country. The idea of pulling all of Ukraine away from the Russian sphere of influence will have to be abandoned. Crimea, part of Russia for centuries until the mid-1950s, is gone now, and there’s no point in seeking to reattach it to Ukraine, because it was only artificially attached in the first place.

If this be appeasement, anyone is free to make the most of it. The only alternative is an escalated conflict, with Russia eventually determining the Ukrainian fate unilaterally, with far worse consequences for Ukraine’s Western-oriented citizens than would be the case with a negotiated settlement.

In blasting Merkel, Stephens holds up as a model of statesmanship South Carolina senator Lindsey Graham, who berated Merkel at a recent Security Conference at Munich. “I don’t know how this ends if you give [the Ukrainians] a defensive capability,” intoned Graham. “But I know this: I will feel better because when my nation was needed to stand up to the garbage and stand for freedom, I stood for freedom. They may die. They may lose. But all I can tell you is that if somebody doesn’t push back better, we’re all going to lose.”

All going to lose what? The senator seems to be saying that peace of mind within his own fevered brain should drive American foreign policy. Stephens agrees, which is understandable, since he seems to have caught the fever. Such expressions reflect the reality that emotionalism is never a sound basis for foreign policy. And the emotionalism surrounding the overused and rarely understood “appeasement” analogy is particularly dangerous.