Ukraine, Russia and the EU Gas Drama: A Three-Way Game of Chicken 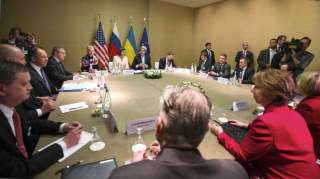 Gazprom's recent decision to cease supplying natural gas to Ukraine in the absence of any agreement on settling Ukraine's debts for past gas deliveries as well as a new pricing framework for future shipments now sets up Moscow, Kyiv and the EU in a tense three-way game of chicken. Who will blink first?

The first question is whether or not Ukraine will begin to siphon off gas currently transiting its territory for delivery to European customers of Gazprom. With the fate of the South Stream pipeline—a second transit network designed to directly connect Russian suppliers with European customers and bypassing Ukraine altogether—currently in limbo as the European Commission examines whether its construction violates EU regulations, Russia would be anxious to trumpet any Ukrainian "theft" of EU-bound gas to drive home the argument that Europe's energy security depends on eliminating untrustworthy middlemen. In turn, aware that European popular support for Ukraine may begin to diminish if European populations begin to suffer energy shortages or higher prices as a result of the disruption, the Ukrainian side may decide not to interfere with gas transit and rely on the country's own stockpiles of gas in order not to play into that Russian narrative.

The second question is whether the EU (or the United States) is prepared to offer additional financial support for Ukraine. If Ukraine is unable to prepay for gas deliveries—the condition Gazprom now insists upon for resuming gas supplies—would EU countries be prepared to purchase additional supplies of gas from Russia and then resell that gas on credit to Ukraine to tide Kyiv over (and perhaps use that as additional leverage to force painful reforms in the domestic Ukrainian energy markets)? Some additional purchases of gas seem likely in any event, because if the plans to reverse-supply Ukraine from Slovakia and Poland are fully implemented, the ultimate source of the gas remains Russia—unless EU countries are prepared to give up some of their existing supplies to ration them for Ukrainian use. If Western support for Ukraine in the next few days does not move beyond words, then newly elected President Petro Poroshenko will be able to accurately assess what cards he has to play against the Kremlin.

And what will be the result of the breakdown of talks? Given that the current government in Ukraine was not prepared to accept a European price for gas and wanted a lower price—and wanted firmer contractual guarantees of that lower price—will a shutdown of gas and the economic disruption it may produce give Poroshenko—who has no authority to change the prime minister or cabinet—the leverage he may want to ask for the resignation or dismissal of Arseniy Yatsenyuk and to be able to install his own team in its place?

And does a prolonged gas disruption make the Europeans more or less likely to move ahead with a third round of sanctions against Russia? Since the Europeans were reluctant to move ahead with stronger measures against Russia out of a desire not to negatively impact energy flows, if there is going to be a cutoff anyway, does the economic fallout make it easier to contemplate the imposition of sectoral sanctions, including on the energy industry? Or will European business and political leaders blame the breakdown of talks on perceived Ukrainian unreasonableness?

European Energy Commissioner Guenther Oettinger seems confident that talks will resume. Will a few days of a gas shutdown (along with stronger economic measures taken against Ukrainian exports to Russia) put Kyiv in a more tractable mood? Or will the Ukrainians move full steam ahead with signing the EU association agreement by June 27th and ride out the crisis until Western pressure forces a change of attitude in Moscow? Stay tuned.

Nikolas K. Gvosdev, a contributing editor to The National Interest, is the coauthor of the recently-released Russian Foreign Policy: Interests, Vectors and Sectors.