Ukraine-Russian Relations and the Future of Ukraine 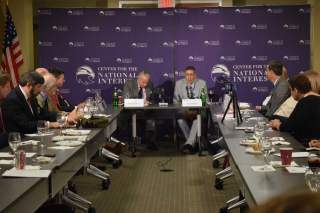 The unexpected election of the former comedian and businessman Volodymyr Zelensky in April 2019 to the presidency upended Ukrainian politics. Will Zelensky now grow into a serious political leader? To discuss Ukraine’s future, the Center for the National Interest hosted a Thursday luncheon talk titled “The Future of Ukraine and Ukraine-Russia Relations,” by John Herbst, director of the Eurasia Center at the Atlantic Council and a former U.S. ambassador to Ukraine. The Center’s own board member Richard Burt, a former U.S. ambassador to Germany, moderated. Herbst, who has a long record of diplomatic service and has previously served as ambassador to Uzbekistan, is a fluent Russian speaker and a major authority on Russian and Ukrainian politics.

“People of Ukraine were demonstrating in polls over eighteen months ago that they wanted a new face,” Herbst stated, “not so much because of the Russian war in Donbass, but the state of domestic affairs,” including a “static socioeconomic system that has categorized the state of Ukraine in the thirty years since independence.” Ukrainians’ desire for change was so overwhelming that Zelensky won 73 percent of the vote in the runoff, and his Servant of the People Party—named after a satirical show in which Zelensky had played a fictional high school teacher cum president of Ukraine—won 254 out of 450 seats in July 2019 parliamentary elections.

“For the first time in Ukraine’s post-independence history, you have one party with an outright majority,” Herbst stressed. “The changes they want are within [Zelensky’s] grasp if he seeks to make those changes.” Herbst, who met Zelensky this past February, praised the Ukrainian leader, calling him “a highly successful comedian and businessman” and “quite smart.” At the time of their meeting, Herbst claimed, Zelensky “wasn’t paying great detailed attention to major political and economic issues,” but foreign ambassadors “saw him six weeks later and were deeply impressed” with the knowledge Zelensky had acquired.

Zelensky’s background as a native Russian speaker of Jewish descent who grew up in eastern Ukraine would have “put him somewhere in between” a pro-Western and a “multivector” approach to Ukraine’s international position, Herbst observed. He added that Zelensky’s post-Soviet background may well render him more open to a negotiated settlement with the separatists and the Kremlin.

The Ukrainian president has proposed holding a referendum on the possibility of joining NATO--a distinct contrast to previous President Petro Poroshenko’s signing of a constitutional amendment this past February that pledged Ukraine to entering both NATO and the European Union. Poroshenko stated that he viewed membership in both entities as a “strategic mission.”

Zelensky has also suggested opening up more crossings across the Line of Contact between the Ukrainian central government and eastern separatists. According to Herbst, who is a frequent guest on Russian television, such moves represent “concessions” that Russia has not reciprocated.

“Putin has not congratulated Zelensky on his election, and more importantly, Putin sent a little provocation his way when Zelensky was president-elect with the passport game,” Herbst said, referring to Russia’s recent decision to expedite Russian citizenship papers for residents of the disputed zones. “Zelensky has extended his hand, and he has gotten nothing back. And Zelensky, again, is a guy who learns from his experiences.”

In late July, the Ukrainian government suddenly seized a Russian oil tanker, a decision Herbst called “a gutsy move. Gutsy, but not stupid, because [Zelensky] kept the tanker and released the sailors.” Herbst asserted that Ukraine has the “upper hand in Donbass.” He claimed that the Ukrainian public is overwhelmingly opposed to the Russian presence in eastern Ukraine, while the Russian public is increasingly weary of economic sanctions and military casualties brought on by its government’s intervention, as evidenced by Moscow’s attempts to hide the war dead from the media.

“To use an old Marxist phrase, the correlation of forces is on the side of Ukraine,” Herbst said. Referring to the peace negotiations in Minsk as “ossified,” Herbst claimed that the first real Russian diplomatic initiative began in January 2016, soon after Russian forces began to fight a second front in Syria, and ended in June 2016, after the nomination of Donald Trump as the Republican candidate in the U.S. presidential elections.

“[Russia’s leaders] were hoping for a better deal vis-a-vis the United States on Ukraine,” Herbst said. “Trump was not the panacea they hoped.” Burt added that he heard from “well-informed American sources” that “Zelensky is prepared to take a different approach from these ossified Minsk negotiations and look at holding elections in the east.”

Herbst said that “real elections” and political autonomy in the disputed areas could be a “face saver” allowing Russia to withdraw its support for the separatists. But he said that the prospect of pro-Russia leaders in the east having “veto power” over Ukraine’s national security decisions would be a major political stumbling block.

Jacob Heilbrunn, editor of the National Interest, opened audience questions by bringing up the Austrian State Treaty of 1955, which restored Austrian sovereignty. “Would the 1955 Austrian state treaty provide a model where not just the United States, but also Germany, would be involved in negotiations to restore full sovereignty to Ukraine?” he asked. Herbst demurred. “Your question is written from the perspective of great power thinking, where great powers decide these things,” he said. Burt, however, suggested that Heilbrunn was onto something. He emphasized that Soviet troops had exited Austria after the four-power agreement was signed: “I’ve never had a single Austrian complain to me about those great powers doing deals above our head.”

George Beebe, vice-president of the Center for the National Interest and former director of Russia analysis at the CIA, zeroed in on Herbst’s contention that Russia has the upper hand. “One of the things that has impressed me as a Russia observer is the amount of political will in Russia towards Ukraine,” he said. While pressure is building within Ukraine for a political settlement, Russia’s “ability to endure economic hardship, and their ability militarily to escalate, to ensure the forces in Donbass are not defeated, is impressive.” According to Herbst, “I think Ukrainians want peace, but they don’t want to let the Kremlin dictate their sovereignty.”

“There are people in the elite who understand that this is a disaster for Russia, and it’s part of a package of policies that are a disaster to Russia,” he added.

Wayne Merry of the American Foreign Policy Council asked about U.S. policy, asking why Zelensky has not been invited to meet with American leaders. “If Poroshenko had been re-elected, he would have had an Oval Office invitation by now…he probably would have addressed a joint session of Congress by now,” he said. Herbst said that there are rumors in Ukraine of an upcoming summit in four to six weeks between Zelensky and American leaders. “I think that’s true,” he commented.

The discussion turned back towards domestic policy, as several audience members asked about Zelensky’s ability to implement real anti-corruption reforms. “There is a growing sense of Ukraine fatigue” at the European Union, said Frances Burwell of the Atlantic Council, “because of the lack of reforms under the previous government.” Her colleague Bob Nurick brought up a recent Kyiv Post article accusing Zelensky of appointing “tainted officials” to the judiciary. Herbst indicated that he is cautiously optimistic about Zelensky’s future political prospects. The next year or so will reveal whether Zelensky can turn Ukraine around. He concluded, “He may be a very competent man, but if he can be a successful president is a question of another order.”

Dimitri K. Simes, president of the Center for the National Interest, agreed with Herbst that public enthusiasm inside Russia for the intervention is waning. “I understand why we would not allow elected local leaders in Donbass and Donetsk to have veto power over Ukrainian national security decisions,” Simes said, but “there can be a formula” that assures Ukraine will not be in NATO any time soon. NATO, after all, does not itself view Ukraine as ready for membership at this point. “What you’ve described is certainly a possibility and not necessarily a terrible possibility,” Herbst responded. Perhaps there is truly room for a diplomatic solution to the long-running Ukraine conflict.

Image: Center for the National Interest