Ukraine Is a Tragedy, But America’s Biggest Threat Lies at Home 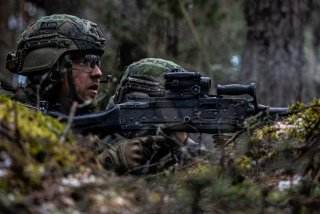 THE INVASION of Ukraine is tragic and dangerous. But it is also a huge geopolitical opportunity for the United States.

The dominant geopolitical trend of the twenty-first century has been the steady decline of American hegemony and the erosion of the unipolar world that was briefly created by the end of the Cold War. But Russia’s failures on the battlefield—and the Biden administration’s forceful and effective diplomatic response—present America with a chance to halt and perhaps reverse this trend.

Since 2000, a number of events have eaten away at U.S. power and prestige: 9/11, two failed wars in Iraq and Afghanistan, the Global Financial Crisis that began on Wall Street, the election of Donald Trump, the reassertion of Russian power, and the inexorable rise of China.

The idea that the United States and the West as a whole are in irreversible decline has become a central feature of both Russian and Chinese official discourse. Vladimir Putin liked to proclaim that Western liberalism was obsolete. Xi Jinping regularly proclaims that the East is rising and the West is in decline.

Putin’s strongman style of leadership gathered fans around the world in the years before the invasion of Ukraine. His fan club included Mohammed bin Salman in Saudi Arabia, Rodrigo Duterte in the Philippines, Viktor Orban in Hungary, and Trump, who called Putin a strategic genius just days before his invasion of Ukraine.

The fact that Putin’s war has gone so badly should weaken the prestige of Russia and its leader. By contrast, the United States and the EU have demonstrated that the supposedly decadent Western alliance can still be formidable—when it is roused. The continued dominance of the dollar has allowed the United States to effectively cut Russia out of the global financial system. Even Chinese tech companies will be wary of supplying Russia, in case they run into secondary American sanctions. The superiority of Western military technology, supplied to the Ukrainians, has also been demonstrated on the battlefield.

All of this sends a useful message—not just to Russia, but also to China. Direct comparisons between the United States and China have in recent years looked encouraging for Beijing—China is now the world’s largest manufacturer and exporter and has the world’s largest navy and foreign reserves. But China, unlike the United States, does not have a network of allies. Measure China against the United States, the EU, Japan, and South Korea, and the contest looks a lot less even. The “West,” it turns out, includes the advanced democracies of Asia. This message has been usefully reinforced by the Ukraine crisis.

Unlike the Trump administration, the Biden White House has understood the importance of allies—and has worked hard to keep them onside. America’s central goal over the next few years should be to build on the allied unity demonstrated by the Ukraine crisis. Joint approaches and policies should be created in key areas—such as technological standards, finance, and security in the Asia-Pacific.

But while the current moment in history offers a unique opportunity to rebuild American global leadership around a revived Western alliance—there are also obvious dangers. Pushing back against a desperate nuclear-armed power is a delicate and perilous exercise.

The biggest threat to a revival of U.S. global leadership, however, lies at home. American democracy has rarely seemed so fragile. If Donald Trump retakes the White House on the back of conspiracy theories and ethnic nationalism, most of the EU will be appalled—and the Western alliance will be in severe trouble, once again.

Gideon Rachman is the Chief Foreign Affairs Columnist at the Financial Times.